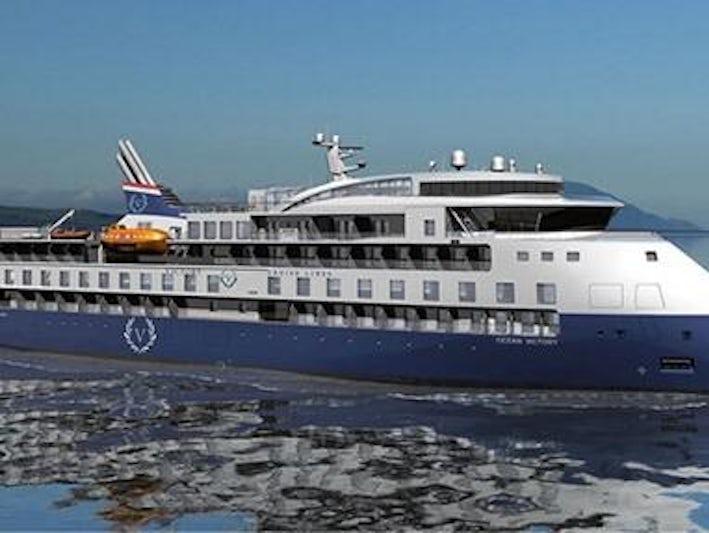 Set to debut in 2022, the 186-passenger Ocean Victory marks a new milestone for Victory Cruise Lines. Following the line's acquisition by American Queen Steamboat Company, the forthcoming Ocean Victory will allow the line to expand beyond its current coastal itinerary offerings into much more rugged terrain, starting with Alaska in summer 2022.

Sporting a unique profile with its rounded, swept-back bow, Ocean Victory is the second SunStone Infinity-class new-build. Constructed and designed by SunStone (a ship management and leasing company), Ocean Victory will feature a full complement of expedition gear including 20 Zodiac rafts, a fleet of kayaks and an onboard expedition team composed of naturalists, marine biologists, scientists and historians.

At 342 feet, the ship's nimble size will allow it to dock in ports of call that are off limits to larger cruise ships.

The ship's distinctive styling comes from its unique X-Bow, a design that promises a smoother and more comfortable ride with lower noise and vibration levels. The ship is also outfitted with Rolls-Royce Zero Speed Stabilizers to reduce ship's movement, dynamic positioning that allows the ship to hold its place on the water without the need for anchors and the latest environmental enhancements.

While exact details are still being unveiled at press time, Ocean Victory will feature two dining venues, a forward-facing observation bar, a sun deck with an aft-facing infinity-style pool, a dedicated lecture room, a coffee bar, gift shops, a fitness center and spa, and a specially-designed zodiac embarkation area and mud room.

Ocean Victory is outfitted to Polar Class 6 ice specifications, meaning it is capable of sailing the waters of the Arctic and Antarctic.

Most meals aboard Ocean Victory will be enjoyed in the aft-facing Restaurant, which provides 180-degree panoramic views. An adjacent a la carte restaurant will be available to diners for an additional charge.

High atop the ship, a casual bistro serves up lighter fare and is conveniently located aft of the ship's forward observation lounge.

Five cabins on Deck 3 will be designated as solo-occupancy cabins. At 196 square feet, these generously sized rooms will have fixed porthole windows and private bath and shower facilities.

Another four cabins on Deck 3 are designed for triple occupancy. These Category F rooms are larger at 236 square feet and also feature fixed porthole windows.

French balcony cabins are located high up on the ship on Deck 7. These rooms are smaller at 172 square feet but benefit from being close to the ship's navigation bridge and aft observation deck.

Standard balcony cabins and suites run in size from 258 to 452 square feet, depending on configuration and category. One top-of-the-line two-bedroom suite measures 484 square feet and is located on the port side of Deck 4.

Exact amenities and features of each room have yet to be announced.

Ocean Victory is all about being outdoors and to that end, the ship's top deck space features a number of amenities to connect passengers with nature. A dedicated observation area also serves as an on-deck barbecue space when conditions permit, and a panoramic, glass-enclosed observation lounge allows for spectacular 180-degree views overlooking the ship's bow.

A viewing platform is also located forward of the ship's navigation bridge, and an aft-facing deck and pool area provide relaxation and additional vantage points when conditions permit.

Like any true expedition ship, expect a healthy dose of lectures onboard Ocean Victory from the vessel's expedition team. These tend to be destination-based and change from sailing to sailing depending on which experts are sailing with the line.

There are no big-ship-style theater presentations or productions onboard Ocean Victory.

Ocean Victory will sail seven- to 10-night voyages to Alaska between May and September 2021 for Victory Cruise Lines.