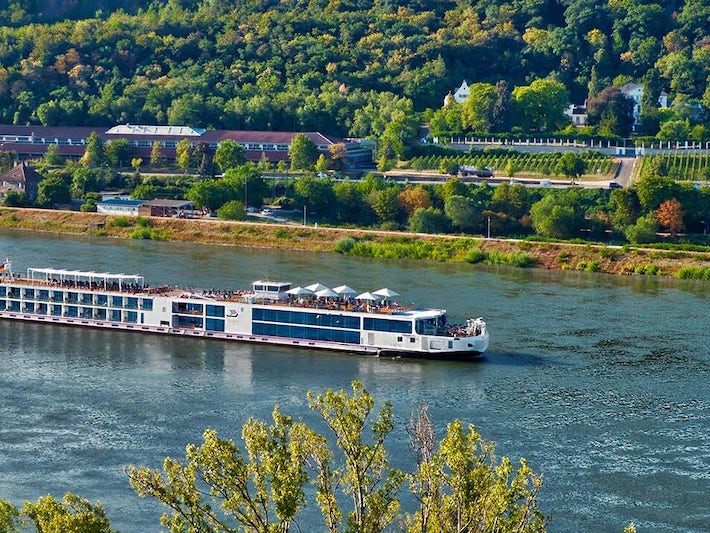 Named for the Valkyrie Skaga in Norse mythology, Viking Skaga is one of four brand-new ships designed to navigate the Seine and dock directly in the heart of Paris, just a 10-minute jaunt from the Eiffel Tower. A modified version of Viking's award-winning Viking Longships, Viking Skaga carries just 168 passengers instead of the usual complement of 190 found on the slightly larger Longships.

Viking Skaga continues to boast all of the features and Scandinavian design elements that made the Longships such a success. These include the indoor-outdoor Aquavit Terrace that allows for dining outdoors, and a unique cabin corridor arrangement that allows for Viking Skaga to offer true suites that feature separate living and sleeping areas.

Onboard, passengers will find plenty of open, airy, and subtly Scandinavian public rooms. The ship features a small library and internet lounge adjacent to the ship's two-story atrium that is topped by a glass skylight; the spacious Viking Lounge; and the Restaurant one deck below.

In keeping with other Viking riverboats, Viking Skaga does not have an onboard spa, salon, fitness center, or bicycles for rent. (Viking states that these are plentiful and inexpensive to rent ashore.) Viking has used that space to offer more types of cabin categories, from economical river-view staterooms to full-blown suites.

As with other Viking River vessels, Viking Skaga offers two main dining venues: the Restaurant and the Aquavit Terrace.

In the Restaurant, cruisers will find breakfast, lunch and dinner offered in a room that boasts true floor-to-ceiling windows and plenty of seating options, though few tables for two; Viking encourages passengers to mingle amongst each other at mealtimes. Little niceties are offered throughout, like complimentary Champagne or mimosas at breakfast. Viking also offers beer, free-flowing wine and soft drinks free of charge with lunch and dinner. Getting a top-up on the way out of the restaurant isn't unheard of.

Onboard cuisine tends to reflect a blend of European and North American specialties, plus a few Scandinavian dishes for good measure (the "Chairman's Poached Salmon", for example, is a favorite of Viking Chairman Torstein Hagen). Once per cruise, Viking ships hold a special themed buffet night that revolves around local cuisine. Dinners are otherwise a multi-course, menu-driven affair.

One deck above, the Aquavit Terrace serves as an alternate dining venue. With 180-degree walls of glass that can be opened to the elements when weather allows, this scenic yet casual dining space offers lighter fare for breakfast and lunch, along with a sit-down menu of casual favorites for dinner. It isn't promoted heavily onboard, but passengers should try dinner here at least once per cruise, if only for the view and the cozy intimacy of the venue itself.

An add-on package -- called Silver Spirits -- is available to make bar drinks inclusive at all hours. Unlike ocean cruising beverage packages, the Silver Spirits add-on is quite reasonably priced. Viking also encourages passengers to bring aboard their own wine, which can be enjoyed corkage-free in any public room or restaurant.

Coffee (including specialty coffees), teas and water are available around the clock at stations situated just outside the Viking Lounge. Snacks, including delicious cookies and muffins, are also found here at all hours of the day.

Cabins are a strong point aboard Viking Skaga, which features river-view cabins and cabins offering French and step-out balconies, as well as some of river cruising's only true suites. Rooms offer the same soothing Scandinavian decor and materials as Viking's other Longships, and come with bathrooms equipped with heated floors, anti-fog mirrors, spacious stand-up showers and Freyja toiletries.

French Balcony staterooms are somewhat snug at 135 square feet, but offer good value for those who absolutely must have fresh air. The larger Veranda Staterooms bring that size up to 205 square feet and add a step-out balcony with two chairs.

Aboard Viking Skaga, cruisers looking for more room will find some of the largest suites on the Seine.

The ship's Veranda Suites offer 275 square feet of living space and feature both a French and full step-out balcony, along with separate living and sleeping areas, plus an enlarged bathroom. Two 42-inch flat-panel interactive television sets are also offered, with one in each room.

Like the other Viking Longships, the true gem of Viking Skaga's accommodations are the dual 447-square-foot Explorer Suites located at the stern of the ship.  These two aft-facing suites come with a 270-degree wraparound balcony, separate living and sleeping areas, a larger bathroom, and dual 42-inch flat-panel televisions.  Viking also throws in some special perks for these suites, including a complimentary Silver Spirits beverage package, free laundry service and room service breakfast (a novelty on the rivers of Europe).

Up top, cruisers won't find a hot tub or a swimming pool. What they will find instead is an upper deck space that is wonderfully uncluttered, with plenty of seating options and a wraparound jogging track that encircles the outer portion of the deck. Viking grows its own herbs, and cruisers can stop and admire the onboard herb garden, or even take a look at the solar panels that are mounted all the way aft that help to power the ship.

Entertainment onboard is typically limited to informative lectures and talks, and a nightly piano player who taps the digital ivories in the Viking Lounge each evening. The Lounge does feature a decently sized dance floor, but whether it's used is dependent on the passenger base onboard. On some sailings it's hopping; others…

After its 2022 debut, Viking Skaga will operate Viking's eight-day "Paris & The Heart of Normandy" voyages.

Get Viking Skaga price drops
250,000+ people have entered their email