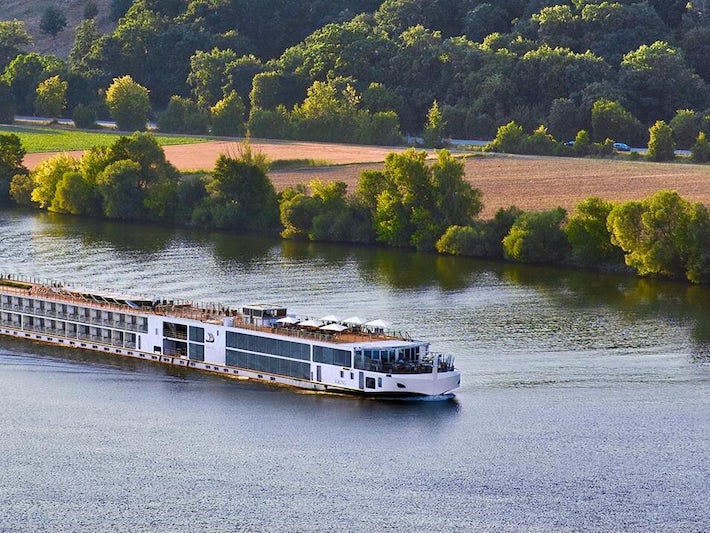 Patterned after Viking's highly successful Longships, Viking Kari is one of four river cruise ships that launched in 2022 that are purpose-built to sail France's Seine River from Paris to Normandy. Equipped with a new hull design and new engines, Viking Kari is able to dock right in the heart of Paris, just a 10-minute stroll from the Eiffel Tower.

Frequent Viking cruisers shouldn't notice much of a difference aboard Viking Kari, with the exception that the ship carries slightly fewer guests, with a maximum capacity of 168 compared with the more standard 190 passengers most Longships feature.

Viking Kari still features Viking's trademark Aquavit Terrace, an indoor-outdoor lounge space where guests can dine outside on a casual menu for breakfast, lunch and dinner. The ship also has a cozy main lounge with floor-to-ceiling windows and plenty of Scandinavian touches, a two-story glass atrium reception lobby, and a main restaurant with floor-to-ceiling windows.

Like other Viking river cruise ships, you won't find a spa, salon, fitness center or bicycles onboard Viking Kari. What cruisers will find are a variety of comfortable and cozy staterooms that range from small river-view rooms to some of the most spacious suites on the Seine -- not to mention Viking's trademark service and attention to detail.

Like Viking's regular Longship riverboats, Viking Kari offers breakfast, lunch and dinner in the ship's main restaurant; a comfortable, Scandinavian-esque affair with floor-to-ceiling windows. Little niceties like complimentary mimosas are offered at breakfasts, and multi-course dinners are a blend of European and American specialties. In keeping with the rest of the fleet, beer, wine and soft drinks are complimentary with lunch and dinner.

An alternative dining venue -- the Aquavit Terrace -- is offered one deck above. Framed by 180-degrees of glass windows that can open when conditions allow, the Aquavit Terrace hosts light breakfasts and lunch, plus a sit-down dinner menu of casual favorites. This gem of an area is often under-promoted onboard and is worth trying out at least one evening.

Like most river cruise ships, room service is not available, except for those guests staying in the two Explorer's Suites, who are entitled to complimentary room service breakfast. Coffee and tea are offered around the clock thanks to machines on both sides of the Viking Lounge, and snacks are prevalent there throughout the day and night.

Viking offers its Silver Spirits beverage package that makes all drinks complimentary for a reasonable price. The line also encourages passengers to bring their own bottles of wine onboard for consumption, corkage-free, in the ship's public rooms.

French Balcony rooms are the smallest onboard at 135 square feet, but are still well laid out. Veranda Staterooms are larger at 205 square feet and feature a small but functional step-out balcony.

Up top, Viking Kari features a jogging track, Viking's onboard herb garden, and plenty of covered and uncovered seating space. Viking's deck space is broad and uncluttered, and the Plexiglas railings are a nice touch that helps improve visibility for passengers seated in deck chairs (most river cruise ships have steel bar railings).

Onboard entertainment tends to focus on local entertainers brought on in certain ports of call. A pianist plays in the Viking Lounge in the evening for guests, and a large dance floor is situated in front of the bar. How often it is used depends on the passenger make up of each sailing.

Viking Kari will sail Viking's eight-day "Paris & The Heart of Normandy" river cruise when it enters service in 2022.

Get Viking Kari price drops
250,000+ people have entered their email