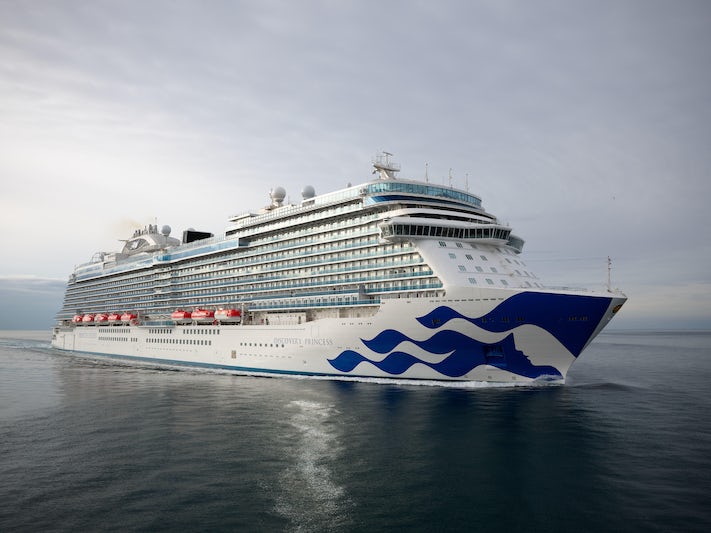 The fifth and final Royal-class ship to debut from Princess Cruises, Discovery Princess ticks all the right boxes. The ship is comfortable and classy, with a general layout and public spaces that will be familiar to past Princess passengers and welcomed by those who have never set sail with the line before.

The ship -- essentially a carbon copy of 2021’s Enchanted Princess – doesn’t tinker with the Princess formula. Passengers can expect to find the central Piazza Atrium that has been a staple of the line since it was introduced in 2006 aboard Crown Princess, surrounded by a bevy of food and entertainment options, including Crooner’s Bar, which returns to a commanding position on Deck 6 after being missing from several Royal-class vessels. However, passenger favorite Vines wine bar is missing, removed to make way for the Salty Dog Gastropub on Deck 5.

Still, there are little signs throughout Discovery Princess indicating Princess is ever so slowly modernizing its look and feel. Carpeting, wall treatments and door paneling in stateroom corridors departs from the same décor the line has used on every ship launched since the mid-1990’s, and the ship throughout has an upscale, modern feel that wouldn’t be out of place on more upscale cruise lines.

Discovery Princess is a ship that may not rock the boat in terms of design – but one that still provides a quality cruise experience at a great price.

Familiar to past Princess Cruises passengers and intuitive to new cruisers, the Discovery Princess deck plans reveal a host of diversions to enjoy by day and night.

Bookended by a series of sweeping spiral staircases and a set of glass-enclosed panoramic elevators, the Piazza hosts live music during afternoons and evenings, and is the entry point for popular watering holes including Good Spirits at Sea, Crooner’s, and Bellini’s – the latter of which offers a commanding perch on an overhang on Deck 7.

But the Piazza Atrium is also the entry point for the ship’s two anytime dining venues as well as the casual Gigi’s Pizzeria and specialty restaurants Bistro Sur La Mer and the Salty Dog Gastropub.

A large casino is situated on Deck 6 forward of the atrium, while Take Five – a most surprising jazz lounge – takes up a small space adjacent on the port side of the vessel.

Shops and specialty restaurants make up much of the rest of Decks 6 and 7, along with entertainment venues like Princess Live!, the Princess Theater, and the secondary Vista Lounge.

Discovery Princess deck plans also include a spectacular pool deck area on Decks 16 and 17, with the requisite pools, hot tubs and oversized Movies Under the Stars screen – another cruise staple pioneered with Princess when the line launched Caribbean Princess in 2004.

Up top, passengers will also find an expansive Fitness Center and the adults-only Retreat Pool – an interior space tucked away ahead of the forward elevator bank. It’s the perfect complement to the additional-charge Sanctuary on Deck 18 forward, away – but never out of reach – of the well-designed World Marketplace buffet restaurant on Deck 16 aft.

Discovery Princess Offers Plenty of Cabins to Choose From

Cabins on Discovery Princess are among the most varied in the Princess fleet, thanks to the addition of two top-of-the-line Sky Suites situated overlooking the pool deck on Deck 18 forward.

At 1,507 square feet, these dual behemoths offer two bedrooms, two bathrooms, a separate living area, a massive wraparound balcony, and all the perks that come with suite occupancy on Princess, including priority embarkation and disembarkation; priority shore excursion reservations; and an exclusive Concierge Lounge located on Riviera Deck 14 amidships.

What cruisers won’t find aboard Discovery Princess -- as with all Royal-class ships -- are standard Oceanview staterooms. Only interior staterooms, balcony staterooms, and suites are offered onboard, along with just six "Deluxe Oceanview" cabins located all the way forward on Deck 17 that feature floor-to-ceiling glass windows overlooking the bow.

Most popular are the line’s mini-suites, which offer a nice compromise on space (and price) between a full size suite and a regular balcony cabin by adding a large sitting area with second television, a full-size bathroom with tub, and a generous balcony.

It’s a shame, then, that balcony cabins are smaller than average, and stateroom bathrooms feel cheap and uninspired compared to recent offerings from other mainstream lines like Royal Caribbean and Celebrity, with plain, modular showers and sinks and the ever-dreaded (and often-mocked) shower curtain.

Also free of charge is the extensive World Fresh Marketplace buffet on Deck 16 aft and Gigi’s Pizzeria on Deck 6 that whips up fresh pizza creations daily and is often packed during the main Noon lunch hour.

But Discovery Princess excels in its for-cost offerings as well, particularly when it comes to value. The classic Crown Grill steakhouse is priced at $29.99 per person and offered one of the most spectacular meals of our cruise, while the French-themed Bistro Sur La Mer offers a unique at-sea dining experience surrounded by panoramic windows.

Two other specialty dining venues are just steps from each other on the port side of Deck 5: the casual Salty Dog Gastropub and Princess Cruises’ Italian favorite, Sabatini’s.

For the most up-to-date testing, masking, and vaccination requirements aboard Discovery Princess, please refer to Princess Cruises’ health and safety protocols.

Small standard cabins; over-reliance on technology can be frustrating.

Discovery Princess is a comfortable, classy place to spend a week – or more – living the good life at sea.

● All onboard shows
● Most onboard activities, unless otherwise noted
● Fitness center and select fitness-themed classes
● Meals in the ship’s main dining rooms, buffet, and other complimentary venues
● Use of all pools and hot tubs
● On-demand movies and television shows in-room
● Kids and Teens Clubs
● Room service

Costs Not included on Discovery Princess:

Who Is On Board Discovery Princess?

Princess Cruises has always drawn a diverse crowd of passengers, though admittedly most passengers onboard tend to be from the United States and Canada. From loyal past passengers who have been sailing with the line since The Love Boat first hit the small screen to millennials and multi-generational families, expect to find a good cross-section of America setting sail.

Passengers will also find Discovery Princess to be decidedly inclusive and non-judgmental. Special meet-up groups are offered onboard for solo and LGBTQ+ travelers, while support groups like Friends of Bill W. (for recovering alcoholics) are also offered.

As with most cruise lines, newer, larger ships like Discovery Princess tend to attract a slightly younger demographic, and that was the case aboard our inaugural Mexican Riviera sailing out of the Port of Los Angeles.

A curio of the Princess Patter daily program is that Princess has, for years, offered Bible Study at 9:00 a.m. on each day of the voyage, and that occurs too onboard Discovery Princess, located in the Wedding Chapel on Deck 14 aft adjacent to the Concierge Lounge for those so inclined.

Get Discovery Princess price drops
250,000+ people have entered their email

Find a Discovery Princess Cruise from $269

Where does Discovery Princess sail from?

Where does Discovery Princess sail to?

How much does it cost to go on Discovery Princess?

Round trip LA to Cabo

I have taken 23 Princess cruises on ten different ships. Discovery is classed as the largest Princess ships. I prefer the smaller ships. Star Princess remains my favorite!Read More
mcbridm

I recommend an Alaskan cruise on the Discovery Princess to anyone who loves having fun!Read More
bjp

In conclusion, we feel after our 22 cruises that Discovery Princess is a good choice for a quality experience in atmosphere, dining, and entertainment.Read More
top travelers

An honest look at the Discovery Princess