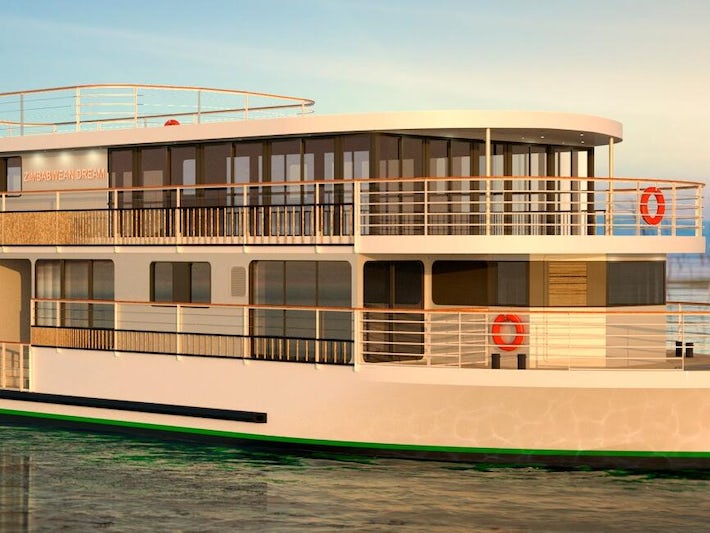 A casual but elegant ship, Zimbabwean Dream features public rooms and staterooms adorned with floor-to-ceiling windows. A Panoramic Lounge provides for excellent opportunities for socializing and wildlife viewing, while the ship's open decks are more than ample for the 16 passengers onboard.

A small pool is located forward on the upper deck. The Restaurant and Panoramic Lounge feature floor-to-ceiling windows that can be opened or closed, depending on the weather.

Onboard currency is the euro, and like most CroisiEurope ships, passengers may need adapters for the two-pronged, 220V European-style power outlets.

The ship is fully air-conditioned, and a small selection of binoculars are on-hand for onboard use by passengers.

Dining aboard CroisiEurope ships is always a regionally inspired affair. Aboard Zimbabwean Dream, expect a healthy dose of European influence in meals, which are served in an open-seating environment in the ship's restaurant.

Dietary restrictions can be catered to with advance notice, and there is typically a selection of dishes on offer. Being a smaller ship, however, Zimbabwean Dream does not have the plethora of menu options typically found aboard the larger, North American-run river cruise ships in Europe.

Eight mostly identical cabins are featured aboard Zimbabwean Dream, all of which are clustered on Main Deck.

The two forwardmost cabins feature private balconies while the other six all come equipped with floor-to-ceiling windows.

All cabins have private bath and shower facilities, air conditioning, flat-screen television, safe, hair dryer and a seating area. A welcome basket is also provided in each cabin.

The uppermost deck aboard Zimbabwean Dream is open to the elements, allowing for scenic viewing during the day and stargazing at night.

Aside from excursions ashore, entertainment onboard comes primarily through interaction with fellow passengers during cocktail hours and mealtimes. Expect stargazing and wildlife spotting sessions to be the primary order by day and night, while reading, card games and socializing fills much of the onboard time.