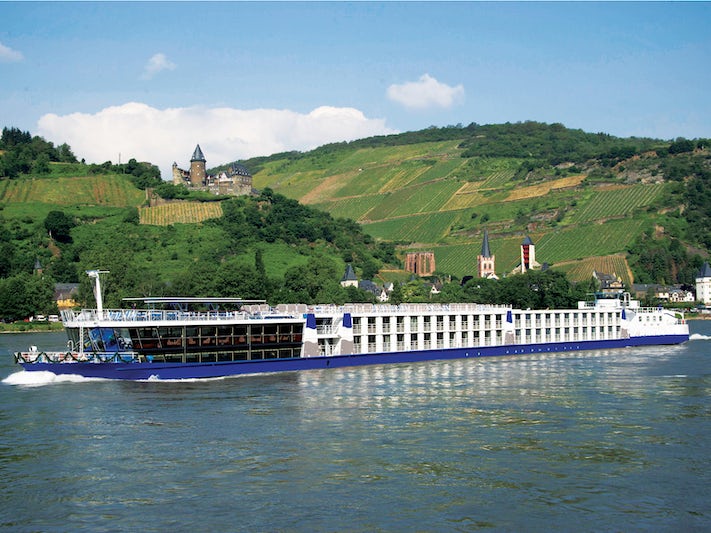 MS Arena is the new flagship operated by Arena River Cruises, which is part of the U.K.-based tour operator Arena Travel. Originally due to enter service in 2020, the launch was delayed due to the pandemic and the vessel finally set sail in 2022.

On exclusive charter for U.K. and Irish travellers, the 192-passenger vessel is specifically targeted at this market with features such as a full English breakfast and afternoon tea. Cruise directors are British and English is the onboard language.

MS Arena was constructed in 2005 and previously sailed as MS Flamenco for the German river line Nicko Cruises. It has been completely refurbished and refitted since being acquired by Arena and sails on the Rhine, Danube and Dutch waterways.

Picking a cabin, particularly if you are a first-time river cruiser, can be complicated if there are a lot of cabin categories of varying sizes to choose from. On MS Arena it is a very straightforward process as there are just three types of cabins and every one is the same size and measures 140 square feet. Most notably, they all come with a full-length panoramic window which can be fully opened onto a French balcony, which is a railing where you can lean out rather than step out, or tilted open for some fresh air. There are no lower deck cabins with fixed windows and MS Arena does not have any suites.

The 96 cabins are across two decks and the majority are Superior Cabins with a double or twin bed configuration. The only difference is that some are on the upper deck and some are on the main deck below. The remaining 26 cabins on the main deck have a drop down bed and a sofa bed that can accommodate two passengers in a twin bed configuration or solo travellers. Up to 12 of these cabins on each sailing are set aside for solos who can use the drop down bed and have a permanent sofa.

During the refurbishment the previous dark decor on MS Flamenco was replaced with a bright and contemporary colour scheme in the cabins. They all come with flat-screen TVs, fold-down chair and ample storage space -- including roomy wardrobes with removable coat hangers -- a safe, plug-in hairdryer, telephone and space under the bed to store suitcases.

Elsewhere, the ship is very light and airy throughout. The lounge feels particularly spacious as the bar is located on one side of the room, rather than occupying a space in the middle which is common on many other ships. There are floor-to-ceiling windows on three sides so passengers won't miss any of the passing views. The one restaurant, which can seat all passengers in a single sitting, also has very large windows and an area towards the bow that can be set aside for groups. A spiral staircase leads up from the front of the dining room to the lounge, which gives the restaurant two entrances.

Passengers are allocated tables at the start of each cruise and keep them throughout. The food is good, plentiful, and skewed to British tastes. Alongside continental cuisine, the breakfast and lunch buffets include a full English breakfast and traditional desserts such as bread and butter pudding. Dinner is a la carte and served to the table. Every meal has vegetarian options and other dietary requirements, such as gluten-free or low salt can be catered for. The ship has a 24/7 tea and coffee station with a large stock of English tea bags.

Like most river cruises, entertainment is low-key. There is a resident keyboard player in the lounge after dinner and occasional visiting acts such as local musicians and singers. The lounge has a small dance floor and during the sailing the cruise director will host a quiz or two. Books and board games are available to borrow during the cruise and there chairs and loungers on the sun deck. Usefully, there are sets of stairs in the middle of the ship which provide easy access to the different levels without having to walk the entire length of the vessel.

MS Arena offers a for-fee laundry service. Basic Wi-Fi is complimentary -- although like many river ships it can be patchy or non-existent in places -- and a premium service is available for an extra charge. The reception is manned 24/7 and there is a small shop selling souvenirs and toiletries.

It should be noted that MS Arena does not have a lift and the three passenger decks and the sun deck are all accessed by sets of stairs.

MS Arena is a Good Choice for First-time River Cruisers

For any British and Irish passengers who are thinking of taking a river cruise for the first time, MS Arena is a good choice. The line offers affordable cruises and a selection of short breaks so travellers can experience a river cruise without breaking the bank. The onboard atmosphere is very relaxed and friendly, with no strict dress codes. Optional excursion packages also help to keep fares down and mean that passengers can decide how much or how little they want to do. Similarly, drinks are served on a pay-as-you-go basis with a final bill at the end of the cruise. This is another factor that makes the upfront cruise price very reasonable, particularly for passengers who drink very little or are teetotal and effectively subsidise others on lines that include free-flowing wine and drinks with lunch and dinner or have an open bar.

For passengers that enjoy a drink there is a premium package that costs €20 per person, per day. It includes fruit basket on arrival, wine, beer and soft drinks with lunch and dinner, complimentary water in the cabin, upgraded bathroom toiletries and free use of the wellness suite which includes a sauna.

Tips are optional and the suggested rate is €7 to€10 per person, per day.

When is the MS Arena Launch Dates?

MS Arena was launched in March 2022 after the original date was put back due to the pandemic.  The line's second ship, MPS Calypso, is scheduled to launch in May 2022. This replaces the MPS Lady Anne, one of the oldest ships operating on the Rhine and Dutch waterways, which was retired in 2020.

The main season runs from April to October when MS Arena sails on a variety of four- to 12-night itineraries on the Rhine, Moselle, Danube and Dutch waterways. There are also special themed breaks, such as the springtime bulb fields in Holland and Christmas market cruises. Arena offers flexible travel options and passengers can choose to reach the ship by coach, rail or air, or travel independently to join the vessel.