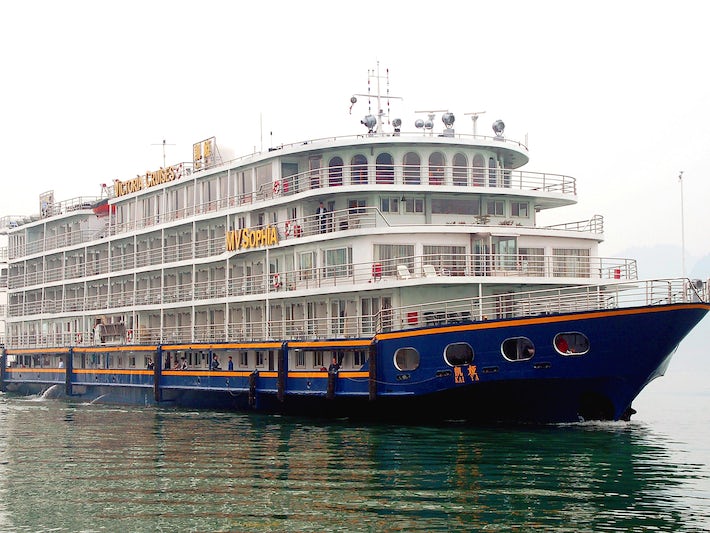 The 208-passenger Victoria Sophia was built in 1994 but given a thorough refit back in 2011. Although Victoria Cruises' website heavily touts its five-star designation, this isn't quite the case. Still, passengers can expect a comfortable, clean and safe river journey aboard Victoria Sophia with the amenities one might expect from a midrange hotel.

Rather than catering to individual passengers, trips aboard Victoria Sophia are typically booked as part of larger overland tours. Because of that, passengers will find numerous different travel groups from around the world sailing on the ship, all with the common goal of cruising the mighty Yangtze and visiting the imposing Three Gorges Dam.

Because of the diverse nature of the passenger base onboard, travelers may find some compartmentalizing of passengers, as groups of cruisers stick to themselves and their tour guides.

Excursions ashore aren't typically included in the price but tend to be available for a reasonable cost. Most of these are two to four hours in length, so expect to spend a decent amount of time onboard Victoria Sophia cruising along the Yangtze.

Meals take place in the single-seating Dynasty Dining Room on Main Deck, which features buffet-style breakfast, lunch and dinner. Menus feature both Chinese and Western specialties, though meals are served on tables with lazy Susans in the middle in the traditional way. Chinese specialties are a real highlight and include authentic rice and noodle dishes, while less-adventurous eaters might want to stick to the typically American fare on offer.

Cabins onboard Victoria Sophia are comfortable and well appointed. All feature river views and private balconies and measure around 200 square feet. Amenities and decor are tastefully done and resemble what could be expected on a moderately priced European river cruise.

At the top end of the scale are the ship's Executive, Deluxe and Shangri La suites that range from 294 square feet to 622 square feet. There are only two of the latter onboard, and they tend to book up quickly.

All cabins feature private bathrooms with toiletries, ample storage space and televisions with a handful of English-language channels.

Upper-deck features include a forward-facing observation lounge with a small outdoor viewing platform overlooking the bow of the ship. An upper viewing area on the Pinnacle Deck is open during select times.

Onboard entertainment is strong, with a wide variety of classes, lectures and experiences for passengers to partake in during their cruise.

Tai chi classes are offered each morning to start the day off, based on the premise that tai chi promotes both mental and physical well-being.

Lectures on the history of China, the Three Gorges Dam and the Yangtze are offered daily, along with Chinese language lessons, classes in Chinese brush painting and cooking classes focusing on regional specialties.

Fashion shows and cabaret shows are sometimes offered, along with a daily tea time and happy hour. Feature films are shown on in-cabin televisions.

Victoria Sophia sails three-, four- and seven-night voyages along China's Yangtze River, traveling from Chongqing to Yichang or vice versa, or round trip from Chongqing.