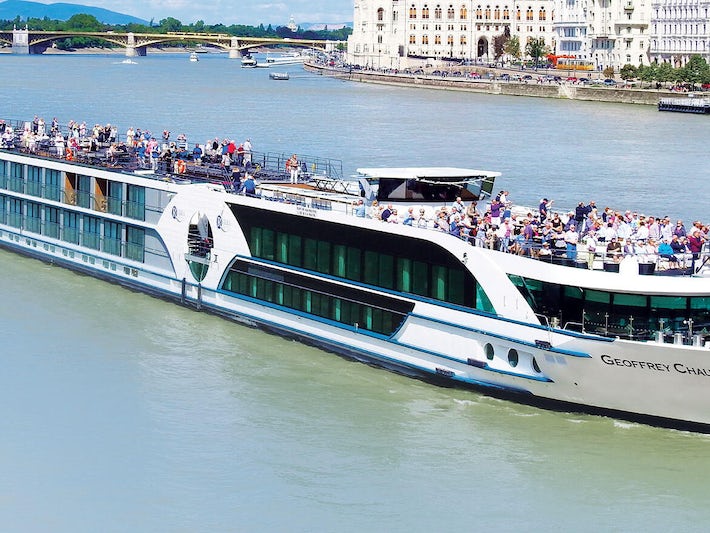 That's not a problem, though: Geoffrey Chaucer offers a comfortable home base from which to explore Europe. Additional amenities onboard include a small fitness center, spa and salon, a small splash pool and putting green, and an elevator that travels between three passenger decks.

Meals are primarily served in the ship's main restaurant on the Ruby Deck. There you'll find buffet breakfasts and lunches, along with a four-course dinner in the evening.

Lighter fare can be found in the ship's Main Lounge, which hosts an early riser breakfast and small bites at lunch.

Uniquely, Geoffrey Chaucer also has a secondary restaurant: a casual bistro situated at the stern of the ship on the Diamond Deck. Menus at this intimate venue vary according to the season, and they're designed for a small group of travelers. Dinners there are complimentary, but reservations are required.

The 88 cabins aboard Geoffrey Chaucer are broken down into six different categories. Riviera calls all of its accommodations "suites," but that's really a misnomer. With the exception of the uppermost category (Deluxe Balcony), the majority of cabins aboard the ship are more akin to standard staterooms.

Emerald Deck Suites are 172 square feet and situated on the Emerald Deck, the lowest passenger deck aboard Geoffrey Chaucer. These rooms feature fixed half-height windows offering river views. These rooms have a small sitting area underneath the window, and are decorated with soothing colors and thoughtful patterns. Bathrooms include a shower and vanity area, along with premium toiletries. Storage space should be adequate for a week-long voyage with two people sharing a room, and beds can be configured as one king or two twins.

Ruby Deck and Diamond Deck Suites slightly increase in size to 183 square feet each. These feature many of the same amenities as the Emerald Deck Suites, the primary difference being the addition of a windowed floor-to-ceiling French balcony.

Ruby Deck and Diamond Deck Superior Suites are larger still, measuring 247 square feet each. Seating areas and the bathrooms are both enlarged, and the furniture is slightly upgraded in these categories.

The top-of-the-line accommodations onboard are the Deluxe Balcony Suites on the Diamond Deck. These feature upgraded furnishings and 269 square feet of living space, accented by a French balcony and a full-size step-out balcony, complete with two chairs and a small table. This is the only accommodation onboard to offer a balcony.

Entertainment onboard focuses on enrichment activities like cooking classes, local experts and performers, and the popular pre- and post-dinner pianist performing in the lounge. It's a stalwart formula that river cruisers appreciate, particularly with days in port that are packed with activities. Most cruisers will retire early after dinner, while a few might linger over conversation and nightcaps.