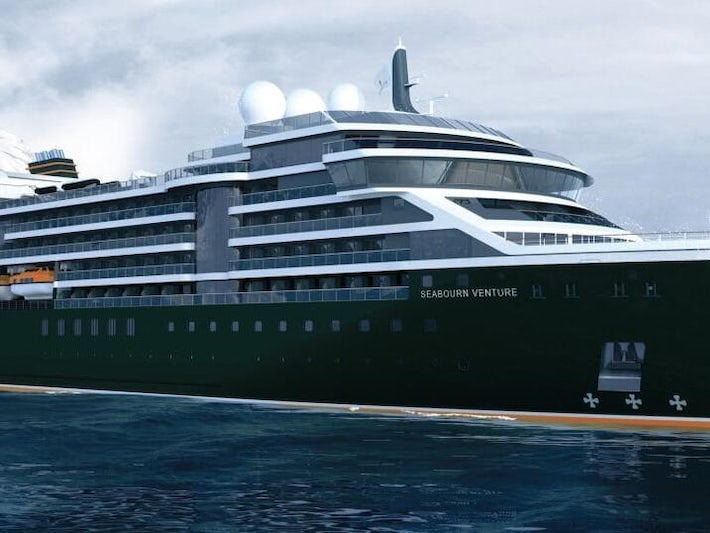 Outfitted with a PC6 Polar Class-rated hull and an expedition team of 27 dedicated specialists, Seabourn Venture will be the line's first custom-built expedition ship when it debuts on July 27, 2022 in Tromso, Norway.

Seabourn Venture and sister ship Seabourn Pursuit (coming in 2023) will represent an entirely new design for Seabourn. Despite this, Seabourn's hallmark luxury touches will still be present throughout these rugged globetrotters, from sumptuous cuisine to inclusive beverages and a tipping-not-required policy.

Seabourn Venture is being constructed with spaces for people to learn and engage with wildlife and the outdoors front and center.

The ship will have a viewing lounge designed along the lines of the luxury brand's popular Observation Lounge. Located high up and forward on the new ship, the Constellation Lounge will serve as a gathering spot, providing 270-degree views through floor-to-ceiling windows.

The Bow Lounge at the front of the ship is located on Deck 6 close to the water, with a full wall of windows. Touch screens will show the ship's location, along with navigational charges. Large screens will project live footage from cameras position outside the ship and from drones, when possible. Expedition team leaders will be in the Bow Lounge throughout the day to answer questions and help people spot wildlife. And if you want to feel like you're on the water, step outside to the Bow Sprit to get the best views of ice.

Lectures will be held at the Discovery Center theater, which features plush seating and high-definition large screens. In addition, this is where guests can watch footage from the submarine voyages.

Although Seabourn Venture is sailing in cold climates, the deck plans show an infinity pool on Deck 5. The aft portion of Deck 9 will boast two panoramic hot tubs situated on the port and starboard sides of the vessel.

And finally, there's a full fitness center and spa onboard.

Expect Dining on Seabourn Venture To Include Line Favorite Venues

Exact dining details for Seabourn Venture are still under wraps. It's a fairly safe bet to assume, however, that they won't stray far from the magic Seabourn formula. Expect to see a main dining room and the more casual Colonnade serving up some pretty spectacular fare. The Patio casual grill also seems to be on the deck plans, as well as favorite hub Seabourn Square.

Seabourn Venture Will Have Submarines, Sea Kayaks, Zodiacs and More

While Seabourn Venture is the line's first expedition ship, it's not the first time that they've branched into adventure cruising. The Ventures by Seabourn program

Seabourn Venture will take all those features to the next level. The ship will offer a full complement of double sea kayaks, mountain bikes, e-bikes and a fleet of 24 Zodiac rafts that will be able to accommodate all passengers onboard at once.

Also offered on the "cool toys" front: two custom-built submarines that will allow cruisers to do a little undersea exploration on select expedition voyages.

An enclosed area called The Landing Zone will allow passengers to transition comfortably between the outdoors and indoors.

Entertainment aboard Seabourn Venture will primarily consist of lectures and information sessions provided by the ship's onboard expedition teams.

Cabins on Seabourn Venture Will Have Line's First Two-Story Suites

The 132 cabins onboard Seabourn Venture are all balcony suites that come in several different sizes and configurations.

Veranda Suites make up the bulk of accommodations onboard, coming in at 355 square feet with 75-square-foot balconies. This is your standard suite accommodation, with a comfortable living area, beds that can be placed either as one queen or two twins, a walk-in closet, a flat-panel television, a fully stocked bar and refrigerator, a small writing desk and vanity area, a bathroom featuring separate tub and shower, and standard amenities like robes, slippers and luxury health and beauty products.

Panorama Veranda Suites increase living space slightly to 417 square feet and enlarge the veranda to 85 square feet. They have a larger living and sleeping area, plus a dual-vanity bathroom with a separate toilet area.

Penthouse Suites are 527 square feet and offer up separate living and sleeping areas, a spacious dual-vanity bathroom and a veranda that spans 97 square feet.

Each of two Owner's Suites offers 1,023 square feet of living space with a curved 484-square-foot veranda. These feature separate living and sleeping areas, a larger walk-in closet and a spacious dual-vanity bathroom.

Two Signature Suites are similarly-styled to the Owner's Suites, but they're slightly larger at 1,377 square feet apiece, each with a 592-square-foot veranda. These particular rooms have the cachet of a heated in-room locker for expedition gear, which will be useful in the cold and often wet polar regions that Seabourn Venture is expected to visit.

Two Wintergarden Suites offer the ultimate in lavish living aboard Seabourn Venture. Though not the largest onboard, they can be combined with an adjacent Mid-Ship Veranda Suite to create a living space of 1,399 square feet with a 205-square-foot veranda. The Wintergarden Suites are noteworthy for being Seabourn's first two-story suites afloat.

Want to Be Onboard First? Seabourn Venture's Maiden Voyage Has Been Delayed to July 2022

Seabourn Venture will make its debut on July 27, 2022 from Tromso, Norway to Oslo.

Seabourn Venture 2022 Itineraries Include the Arctic and Antarctica

The ship will sail from the U.S. East Coast to the Caribbean and through the Panama Canal in fall 2022. After a handful of cruises through the Chilean fjords and Patagonia, Seabourn Venture will start its 2022-2023 Antarctica season.

The Number of Passengers on Seabourn Venture and Other Specs

Seabourn Venture will carry 264 passengers and have 120 crew that includes the 27-person expedition team. The ship has 23,000 gross tonnage and is being built at Italy's T. Mariotti shipyard.

Get Seabourn Venture price drops
250,000+ people have entered their email

Find a Seabourn Venture Cruise from $3,399