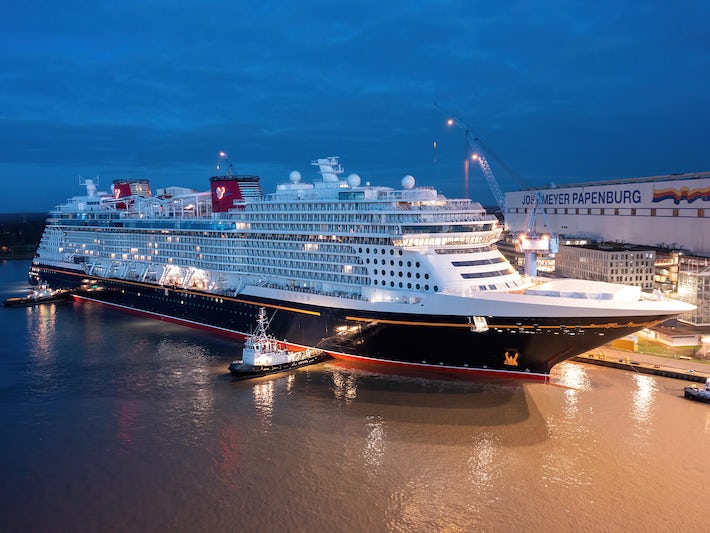 The fifth ship to join the Disney Cruise Line fleet since its inception in 1998, the 4,000-passenger Disney Wish might look similar to its older fleetmates from the outside, but that's where the parallels end.

Inside, Disney has completely rethought the look, layout and feel of Disney Wish from stem-to-stern. Passengers embark into a swooping atrium space known as The Grand Hall -- a space created by removing the midship bank of elevators found on past Disney ships. Gone, too, is the art deco and art nouveau design of past ships, replaced with a crisper, cleaner and, dare we say, more imaginative take on decor. The Grand Hall sets the tone for the rest of the vessel, with its main performance stage, ribbed ceiling, towering columns (inset with hidden LED lighting that switches on dramatically for performances), sweeping staircase, and -- of course, a bronze statue of Cinderella.

Disney could have gone over-the-top with this design, but the decor on Disney Wish is designed to subtly evoke Disney characters, films and settings. Indeed, for those with a keen eye (or a massive personal knowledge of all things Disney), the ship itself reveals its own story that changes deck by deck and space by space.

While kids will no doubt be wowed by the entire experience that includes the most elaborate kid's clubs at sea, the ship is designed to make a meaningful impression on adults, too. The attention to detail throughout is on a scale uncommonly seen, even in the notoriously-detail-oriented cruise industry. From the whimsical "Cheers!" printed in foam on beers ordered in the ship's cozy pub to the subtle Mickey Mouse silhouette designed sunshades in the new forward bow outdoor area of the Senses Spa, Disney Wish is a ship that, truly, becomes a destination in its own right -- for the young and young-at-heart.

Disney Wish Deck Plan Does Away with Separate 'Zones' For Kids, Adults

Beginning with Disney Magic in 1998, every Disney Cruise Line ship was built around the concept of "zones." Kids had their own dedicated zone on the uppermost level of the ship's atrium, and adult-only spaces were clustered away, usually in the extreme bow or stern of the ship. In-between, family-friendly spaces were interspersed.

Disney Wish does away with the concept of zones -- sort of. Kids still have a dedicated zone, this time on Deck 2 below the atrium. This arrangement sounds curious, until you realize that, just off the Grand Hall, is a dedicated check-in to the kid's Oceaneer Club below -- accessible by a grand staircase just for kids, or a fabulous, enclosed slide that swoops down from Deck 3 to Deck 2, right into the Oceaneer Club.

Adult spaces are no longer tucked away like some forgotten secret. Instead, these spaces -- which still welcome kids, for the most part, during daytime hours -- make up the majority of decks 3, 4 and 5. That adult spaces are spread out is a real bonus: It improves passenger flow and allows adults to experience more of the ship than was the case on past vessels. A number of family-friendly entertainment venues are also scattered throughout decks 3, 4 and 5, as are the ship's three distinctive main dining rooms.

On Deck 11, the pool areas aboard Disney Wish begin. In fact, decks 11, 12 and 13 house so many interesting features, activities and spaces for all ages that it is entirely possible to walk right by certain things. And while kids (and adults) aren't likely to miss the entrance to the AquaMouse slide (Disney's first-ever themed attraction at sea), the adults-only Cove Cafe, Cove Bar and infinity pool are a real hike to get to, accessible only from the outer decks and located so far toward the back that only arming yourself with a deck plan will result in successfully finding one of the ship's best adult-minded venues.

Disney Wish deck plans have been ingeniously laid out to encourage discovery and exploration. Don't be surprised if you're still finding hidden gems -- like the mammoth Fairytale Fresh Laundry self-serve complex, tucked away on the forward elevator bank on Deck 8 -- well into your cruise.

Cabins on Disney Wish Offer Space for All and Enchanted Decor

There are 1,254 individual cabins aboard Disney Wish, most of which offer private balconies. Only 121 staterooms are insides, while 185 are oceanview staterooms with picture windows.

Staterooms are crisp and fresh and offer superb space for families traveling together. This includes family categories that feature pull-down Murphy beds inset into the walls of the stateroom (an unusual cruise ship feature), and Disney's trademark split-bath arrangement that includes one bathroom with toilet and sink, and another with a separate sink and shower-tub combination.

Beautiful artwork situated above the headboard of the bed changes based on deck and cabin category, highlighting Disney movies like Frozen, Cinderella, The Princess and the Frog, or Moana, to name a few.

Passengers will also find dimmable bedside lamps and reading lights and a plethora of power options, from European and North American outlets to USB and even a USB-C outlet.

There are 53 Concierge Class staterooms that include additional perks and access to the wonderful forward-facing Concierge Lounge enclave on Deck 12. A total of 23 Concierge Suites represent the most lavish seagoing luxury aboard Disney Wish, including the massive two-level Concierge Tower Suite inset within the ship's forward (dummy) funnel. Designed around a theme that subtly evokes the film Moana, this creative suite offers three bedrooms, a living area accented by two-story glass windows, 4.5 bathrooms clad in marble and stocked with premium Bulgari toiletries, a grand spiral staircase, and nearly 2,000 square feet of living space -- not to mention its own private elevator and entryway at the base of the funnel.

Disney Wish Introduces a World of Food for All

Dining on Disney Wish is a real treat. Not only are passengers invited to participate in Disney's unique rotational dining, whereby your entire table and waitstaff move to a new main dining room each night, but a number of other options (both included and for-fee) are likely to entice passengers to try them at least once.

The main dining rooms aboard Disney Wish are all included in the cost of the fare and are among the most creative at sea, being themed after Frozen, the Marvel universe, and even Walt Disney himself at the splendidly decorated 1923 that pays homage to Walt and bother Roy Disney.

Other casual pool-deck eateries include a Mexican restaurant and a venue serving up Southern barbecue.

Adults will delight in the fine dining offered at Palo -- the ship's superb steakhouse -- and the French-themed Enchante by Chef Arnaud Lallement.

Room service is complimentary and available 24 hours a day.

For the most up-to-date testing, masking, and vaccination requirements aboard Disney Wish, please refer to Disney Cruise Line's health and safety protocols.

Some experiences come at a premium price.

Disney Wish will delight passengers of all ages with its uncommon features and superb attention to detail.

● All onboard shows and first-run movies in the ship's theaters
● Most onboard activities, unless otherwise noted
● All kids and teens clubs onboard
● Meals in the ship's main dining rooms, buffet and other complimentary venues
● Use of all pools and hot tubs
● Fitness center use and selected fitness classes
● In-room on-demand television shows and movies
● The AquaMouse coaster
● Fountain soft drinks in Marceline and on the pool deck
● Room service

Costs Not included on Disney Wish:

Who Is Onboard Disney Wish?

Families, as you might expect, make up the bulk of passengers aboard Disney Wish. But the ship also caters every bit as well to couples without children who are looking for a premium cruise with all the big-ship bells and whistles.

There's no need to be an avowed Disney-phile, either. Nothing onboard is in-your-face, and the ship's designers have thoughtfully created spaces that channel elegance and class along the main theme of the vessel: enchantment. Nothing is tacky, nothing is slapped-on or half-thought out.

Shorter cruises aboard Disney Wish attract younger kids due to the length of time and lower price point, while longer sailings tend to involve multigenerational families and friends traveling together. A large percentage come from the Florida area (the ship's homeport is Port Canaveral, near Orlando), but Disney Wish is popular with those who have to fly -- often from other countries -- for a slice of Disney's magic at sea.

Get Disney Wish price drops
250,000+ people have entered their email

Find a Disney Wish Cruise from $751

Where does Disney Wish sail from?

Where does Disney Wish sail to?

How much does it cost to go on Disney Wish?

The cruise was costly, but the food poisoning was free

I guess Disney Wish crew decided since we were disembarking the next day, we were no longer their problem.Read More
Kskulls77

The crew is great - the ship design has flaws.

We will do more Disney cruises for sue - just not on the Wish for a while.Read More
waynenjanice

We’ve been on all of the Disney ships and we were looking to see how the Wish compared to the others. Bottom line, we will not plan to sail on the Wish again.Read More
Markers333

The long anticipated Disney Wish. I still have mixed feelings about the Disney Wish having sailed on other Disney Ships over 10 times.Read More
Frick187