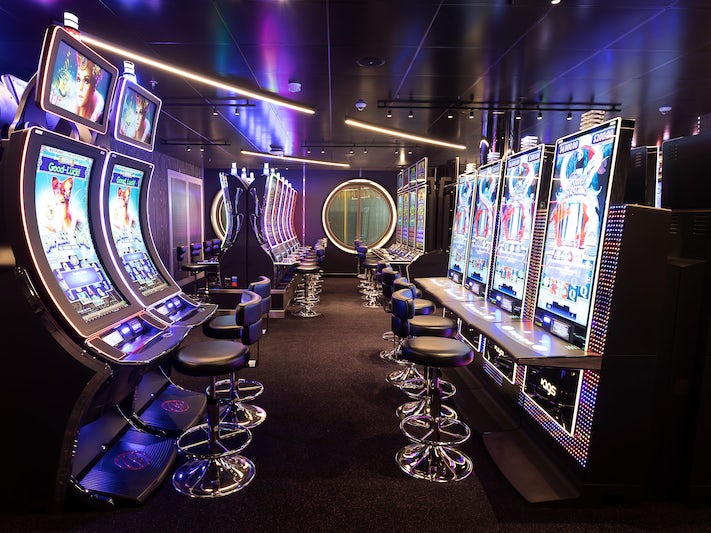 You won't find a paper program left on your bed every evening telling you the next day's events -- you'll find it all on your app, which you are heartily encouraged to use. By cruise ship standards, it's a great app and does not rely on Wi-Fi. It shows you all the day-to-day activities for which you need to make bookings for such as Yoga or Pilates classes, shows, performances, restaurants and events -- and suggestions for other things you might want to try out.

There is always something going on in The Roundabout, with a DJ mixing tunes and plenty of seats to sit and people watch.

Daytime events include workout classes on deck and in the Manor -- some themed, such as an 80s workout (no charge).

You can book a mixology class (for a fee) and a coffee crafting class -- or you could always get a tattoo at Squid Ink.

The ship really comes into its own at night, with live music, a DJ, dancing and impromptu performances taking place in almost all the public spaces.

In terms of regular performances, drop into The Dock and you may find someone next to you starts playing a musical instrument before all the band rise up around you and start performing a wonderful piece called Phantom Tales, which is a folky-type series of micro-plays and mournful songs. The band also sometimes perform outside on deck.

You'll want to book ahead for Never Sleep Alone, in which resident sexologist, Dr. A, dispenses her unique brand of fearless and playful advice in this interactive, late-night cabaret that puts you at the helm of your sexual destiny. It's not for the faint of heart -- and if you're in the front row, expect to be dragged onto stage to perform, ahem, simulated sex acts or learn top tips.

You'll also find a DJ spinning tunes in the Roundabout .

And once a cruise there is Scarlet Night, where you are encouraged to wear red and join the party on the pool deck after the top-deck show, Odysea.

This would be called the main theater on other ships, and would show Broadway-style productions and/or musically-led revue type shows. On Scarlet Lady it's a little different: Seats are not fixed and can be configured so audiences are in the round, facing each other or in a more traditional theater layout. The seats can also be pushed back completely so the stage becomes a dance floor.

We watched one of the best shows we've seen at sea -- Duel Reality -- in which West Side Story and Romeo Juliet are given a contemporary twist with street dancing, gravity defying acrobatics and if you are in the front row, an immersive twist.

Editor's note: Many of the shows are planned for future sailings so we were unable to review them at time of writing. They include:

Another Rose: "Doomed love, acrobatics, and a dinner party you’ll never forget -- it’s an immersive theatrical spectacle that tells the tale of a life lived without inhibitions." (Coming 2022).

Ships in the night: "Through the use of ethereal technology and electrifying choreography, this edgy and beautiful production explores the significance (or insignificance) of incidental connection while on our own personal journeys." (Coming Winter 2021).

Untitleddancepartyshowthing: " This hype music-video-meets-club-scene is an absurdist dance party…  with a dash of old-fashioned showbiz flair. Grab a drink and stay in the (un)moment of it all." (Coming Fall 2021).

"The best &*(&^% nightclub at sea," as CEO Tom McAlpin calls it is certainly a step up from what you find on many ships. Accessed by a mirrored, glittering corridor opening out into a double-height space with a dance floor, retractable stage and lots of seating both on the dance floor and hidden around the club, it's a stand-out venue. On any given night you might get a live band followed by a DJ set. You can choose to be a part of the action or look down from the gallery which surrounds the dance floor above. It is named after the original Virgin recording studio.

Tip: Take a selfie in the glittering corridor.

This where you can sing your heart out in one of four private karaoke booths.

You'll find the Casino on Deck 6, right outside the Manor and on your way from the Red Room to Sip, the ship's Champagne bar. There is small bar here as well as Smoking Room at the back. There are 115 slots as well as craps, roulette, electronic Texas Hold 'em and Baccarat.

Scarlet Lady has a multitude of places to drink both inside and outside. Unlike most cruise lines, the ship does not offer a drink package. Instead, you can set up a "bar tab" that gives you incentives for pre-paying before you arrive.

For a Rock Star: You'll have to be resident in Rock Star Quarters (or know someone who is) to get in to Richard's Rooftop on Deck 16, but it's worth it (think Nikki Beach), with craft cocktails, a DJ set and plenty of space to chill.

For a Pint: Draught Haus, nestled below the sweeping circular stairway and offering eight beers on tap, a wide range of bottled artisanal beers, shots, shot-cocktails and boilermakers. The bar also offer a growler service, so you can enjoy beers anywhere on the ship.

For Something Elegant: A bright pink Jeroboam of Moet greets you in the doorway of Sip Lounge and sets the tone for this beautifully designed bar which curves along the side of the ship. The bar itself is stunning, reminiscent of a 1920s Art Deco New York bar, all glass and brass, serving a wide range of Champagnes and cocktails; as well as High Tea in the afternoon. You can also use the Virgin app to "shake for Champagne" service anywhere on the ship.

For a Quiet Drink: There's nowhere "quiet" exactly onboard, but you might find a teeny bit in The Dock House (Deck 7), towards the aft of the ship during the day (at night you may get some impromptu music pop up).

For a Sing Song: The Groupie. Bag a private karaoke booth with your friends and sing your hearts out.

For a Fine Cup of Joe: Grounds Club. The coffee here is outstanding, hand crafted to perfection, with a selection of fresh pastries. The perfect morning pick-me-up.

There are just two pools onboard, which we feel is a bit of a design flaw. Both are part of The Aquatic Club on Deck 15. The main pool is tiny in terms of swimming area, but bigger when you include the dipping space.

There is a second pool towards the aft which is supposedly the biggest Jacuzzi at sea. There is a hot tub beside it.

There is plenty of space dedicated to sunbathing -- most of Deck 15 around the two pools and all the way to the aft of the ship where you'll find large circular loungers for sprawling. In addition, there are numbered Dutch-influenced hooded beach chairs called Strandkorb.

On Deck 16, there is even more sunbathing space, including private cabanas with drink service to rent; Richard's Rooftop bar for suite guests and an area called The Perch where there's a large net, inspired by sailing ships, where you can lounge.

We love this space's Thermal Suite and are happy to admit that we spent a considerable amount of time here. Is it worth $70 for a day pass? No, not really, unless you stay all day; but if you do like a thermal suite, then this is one of the best we've spent time in. What stood out for us was the variety of experiences: a mud room; a steam room; a salt room; a sauna; two cold tubs and one hot tub and a pool; plus plenty of heated loungers with lovely views out of the porthole windows, almost at sea level. It was tranquil and calming; a lovely space to retreat to from the craziness on the rest of this ship.

There are all the usual treatments available with a hefty price tag attached.

One thing that you'll notice is that pampering services such as the salon and mani pedis have been split away from the overall spa area. We love that the nail salon is right near the pool -- where better to fix a chipped pedi? The salon is down below, and right next to the first M.A.C. makeup store at sea.

Virgin has gone all out with fitness, with a lot of real estate dedicated to it. You'll find everything on the upper decks including two rooms dedicated to fitness -- Bike and Burn, which has treadmills and stationary bikes. On the other side, there's Build & Balance, which has weights and a yoga studio -- with (hallelujah!) a dedicated yoga instructor, who knows her downward dogs from her vinyasas.

In another first at sea, the ships has a bright-red, raised dedicated running/walking track above Deck 16. Having a separate track means you'll  never have to dodge deck chairs, disgruntled passengers or heavily laden waiters. It's clearly marked (6 laps = a mile) and there are two lanes. Again, it's a case of rethinking what works and what doesn't and coming up with an elegant solution.

There's also a basketball cage and a separate "Athletics Club" with outdoor training equipment and even a boxing ring. Fitness classes are free and offered all day long.

Find a Scarlet Lady Cruise from $560