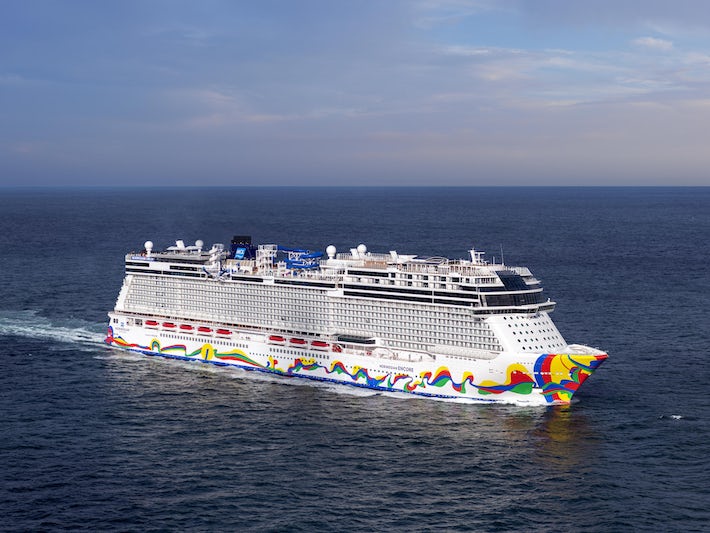 The 3,998-passenger Norwegian Encore is a modern and sophisticated ship, with decor and public spaces that could rival a more luxury-oriented cruise line. It's a ship that aims to give everyone vacation choices, with multiple bars and restaurants, indoor and outdoor activities and plenty of evening entertainment.

In many ways, this is the "big city" of cruising. Norwegian Encore’s 20-plus restaurants let passengers dine in a different venue every night (though not without a cost) and its Deck 8 indoor/outdoor restaurant and bar area makes an evening out feel more like a night on the town. The live entertainment on the Norwegian Encore cruise ship is some of the best we've ever seen at sea -- with Broadway-caliber performers in "Kinky Boots" and "Choir of Man" -- and the bars mix it up with signature cocktails and unique vibes. Encore cabins range from compact solo studios to huge family suites that can sleep up to six.

Thrilling activities run the gamut from freefall waterslides to go-karts (known as the Norwegian Encore Speedway), laser tag, and the Norwegian Encore Galaxy Pavilion, which is virtual-reality play space with family-friendly arcade games and more. Those looking to avoid the crowds can escape to Mandara Spa or the adults-only Vibe Beach Club, or cozy up with a book in the breathtaking Observation Lounge with two-deck high windows at the front of the ship. (This space is particularly popular during the Norwegian Encore Alaska itineraries.) And passengers who want the utmost in tranquility can book into the Norwegian Encore Haven suite complex, where they can luxuriate in exclusive enclaves including a pool, sun deck, restaurant and lounge.

However, while Norwegian Encore is big enough to offer something for everyone, it clearly caters more to some people than others. Sun worshippers might be disappointed in the compressed pool and complimentary sun deck spaces, with outdoor thrill rides and extra-fee sun decks spanning a huge chunk of the ship's top decks. Families with young children are stuck with the Norwegian Encore Splash Academy, a windowless space in the bowels of the ship; a small water play area, and restaurants and shows that are very much geared toward adults.

Travelers on a budget will find, even with promotional booking freebies, that there are a lot of surprise fees and pay-to-play areas; you definitely don't get the full wow factor of this ship by keeping your onboard bill to a minimum.

Overall, Norwegian Encore is a sophisticated ship, there's tons of things to do, and you'll be wowed by the quality -- and quantity -- of the dining and entertainment. Yet because of this, a vacation here can cost more than on other "small-town" ships, and even if you do pony up for the fun, you simply won't have enough time to do everything. Make sure you budget accordingly, and be prepared to book another cruise to experience everything you missed.

Norwegian Bliss and Norwegian Encore are virtually carbon copies of each other. They’re both part of Norwegian’s Breakaway Plus class, offer very similar itineraries in Alaska and the Caribbean, and were built one year apart (2018 and 2019, respectively). However, Bliss has a smaller racetrack and a smaller laser tag area, which are two of the biggest hits on Encore. Encore, though, lacks the very popular Spice H2O outdoor adult-only bar area.

These two ships are so similar that it’s hard to pick one over the other – unless you’re a serious foodie and want to shell out some extra cash for Onda by Scarpetta. Hands down the best restaurant on Norwegian Encore, Onda is a huge draw and what ultimately tips the scale for many cruisers when trying to decide between Encore and Bliss.

For the most up-to-date testing, masking, and vaccination requirements aboard Norwegian Encore, please refer to Norwegian’s Health and Safety protocols. You can also use Cruise Critic's guide to health requirements on the world’s major cruise lines as we know them.

Mega charges if you want to do everything; little public outdoor space

High-energy ship has plenty of choices for everyone, most at an extra fee; budget accordingly

· Meals in three main dining rooms, the buffet, the Observation Lounge and The Local Bar & Grill
· All mainstage theater shows and comedy in the Social Comedy Club
· Live musical entertainment, including in the Cavern Club
· Pools (outside the spa), hot tubs, water park and waterslides
· Daily activities, unless otherwise noted
· Use of the gym, but not most classes
· Continental-style room service breakfasts
· Kids' club activities during the day

Costs Not Included In Your Cruise Fare:

· Gratuities (amounts vary based on stateroom category)
· Automatic beverage and spa tips (20 percent for each)
· All drinks beyond water, tea (including iced tea), coffee and select juices in the buffet
· Specialty dining venues
· Room service (except for Continental breakfast)
· Spa treatments and use of the thermal suite
· Shore excursions
· Wi-Fi (Norwegian Encore internet packages can be purchased online or on embarkation)
· Activities such as the go-karts, laser tag, the Galaxy Pavilion and tastings (wine, whiskey, cocktails, beer)
· After-hours group babysitting
· Casino
· Prohibition: The Musical show
· Vibe Beach Club sun deck
· Photos and artwork

Norwegian Encore attracts cruisers of all ages, as the sheer diversity of the ship's cabin types, from luxury rooms in The Haven to family cabins and solo studios priced for single travelers mean there is room for a wide breadth of travelers. Norwegian Encore carries numerous families during the summer as well as winter and spring holidays. Most cruisers hail from North America, but you'll also meet people from the UK and beyond.

Daytime: Casual all the way, with most people wearing shorts and T-shirts inside the ship and bathing suits and cover-ups outside on the pool deck. Some activities, such as the racetrack and laser tag, require closed-toe shoes.

Evening: Anything goes at night on Norwegian, which carries an all-day casual dress code. You'll see people wearing any range of outfits, from capris and blouses to maxi dresses and going-out attire. In the Manhattan Room main dining venue and in the upscale specialty restaurants (Onda, Le Bistro, Cagney's, Ocean Blue), you'll need to dress up a bit -- slacks, nice jeans, dresses, skirts and tops for women, and nice jeans, slacks, collared shirts and closed-toe shoes for men.

Norwegian Encore has no formal night, but there is Norwegian's Night Out, where men usually wear long pants (dark jeans are fine) and collared shirts, and women put on dresses or nice skirt-and-blouse combos. Norwegian does also have some themed events -- popular ones include the glow party, country night and various decade-themed parties.

Not permitted: Bathing suits are allowed in the buffet and outdoor venues, as long as you have a cover-up and shoes on. Tank tops for men, flip-flops, baseball caps, visors and jeans that are overly faded, with holes or tears and worn below the hips are not permitted in the main dining rooms or specialty restaurants. Kids under 12 can wear nice shorts into all restaurants.

Get Norwegian Encore price drops
250,000+ people have entered their email

Find a Norwegian Encore Cruise from $390

Where does Norwegian Encore sail from?

Where does Norwegian Encore sail to?

How much does it cost to go on Norwegian Encore?

Thoroughly impressed with the Encore and NCL!

If you are considering taking a cruise I HIGHLY recommend the Norwegian Encore, it doesn't disappoint! I feel like I'm cheating on Royal, but absolutely LOVED sailing the Encore. P.S.Read More
KC74

I don't understand some of the extremely negative reviews of the Encore.Read More
Nelsonmiami

Return to Alaska. Our Encore to Alaska!!

My advise for those wanting to go on NCL Encore. 1.) Eat as many meals in the main dining rooms and specialty dining. Avoid the buffet.Read More
EricSchroeder

We were in the same "boat" as everyone else because of Covid, so we really looked forward to the Encore.Read More
Barefoot Gypsy