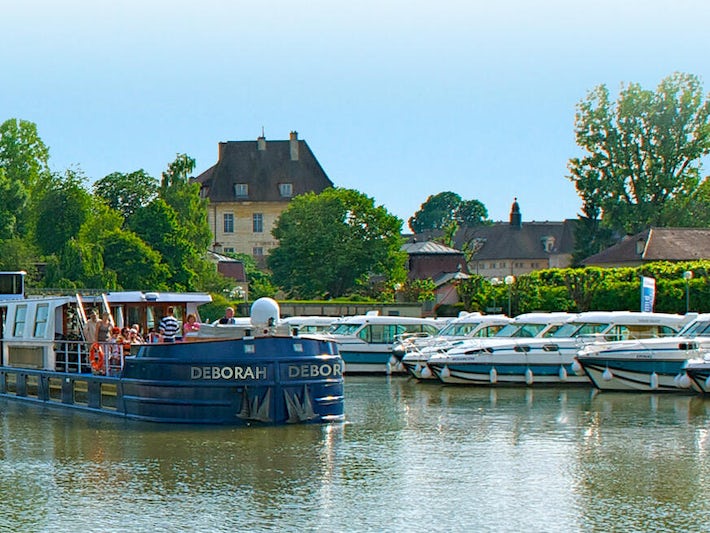 Passengers are drawn to barge cruises for several reasons. One, they want the intimate setting and personal service that a vessel holding fewer than two dozen people provides. Two, they like the idea of lazing around as the boat drifts down a countryside canal, taking life at a slower pace than you'd expect on a typical river cruise. And three, they expect outstanding regional food and drink.

Deborah, a hotel barge launched by CroisiEurope in 2016, more than fits the bill on all accounts. Deployed on the quiet Upper Loire canal in the center of France, the 22-passenger boat is well-designed, with a cohesive bilingual staff and some of the best food and wine we've had on the water. Cabins are tight, as you'd expect, but attractively modern with features like above-headboard storage and USB ports next to the bed. It's a step up from CroisiEurope's other cruises, even those that are also deemed five anchor (which is reflected in the price -- a barge cruise is almost twice the cost of a river cruise). Yet even with the higher fare, Deborah is still a bargain compared with competitors that charge double (albeit with fewer passengers onboard).

Our cruise on Deborah had a bilingual passenger base, with six Americans, two Brits and one Australian making up the English-speaking group and six French speakers, four of them from France and the other two from Switzerland. Usually on a boat so small, Croisi tries to keep all the passengers on the same language -- you'll never be the only English speaker on any Croisi ship -- but we found the international staff able to move back and forth between the groups easily. Contrary to stereotypes, the French-speaking passengers were friendly and wanted to interact with us, and we all did the best we could to form friendships, despite language barriers.

Plus, having French passengers onboard contributed to the immersion that we felt by sailing with Croisi. The French-owned line takes pride in its food and drink, and it goes all-out on its barges. Mealtimes follow the French model, with a scrumptious, but relatively light breakfast, followed by an elaborate four-course meal with paired wines and the most exciting cheese plates we've ever seen at lunch. Dinners begin on the later side and are also three courses (with the exception of the gala night, when you have five). Unlike Croisi's river cruises, though, Deborah provides snacks and nibbles in the late morning and before dinner. You certainly won't go hungry; in fact, you may wonder if you'll ever feel hunger again!

Our issues with Deborah are piddling, but nonetheless need to be mentioned. We expected to be able to spend our afternoons biking along the canal to help work off all that food, but the unevenness of the towpaths caused passenger injuries in Deborah's first year and so the boat restricted bike use in 2017. While we were allowed to take bikes around once we docked and there was one afternoon where we were blissfully set free, overall, we and others were disappointed by the limited cycling options.

The shore excursions, too, weren’t quite what we expected. The charms of the Upper Loire Valley are quiet, mostly centering on wine towns such as Sancerre and Pouilly-sur-Loire. While we liked the places we went, we found that the hired local guides weren't as confident in their English as the Deborah staff, and many spent much more time on very small details of churches and monasteries than most English-speaking passengers would have liked. If we could tweak the program, we'd build in more free time in towns like Briare, Sancerre, La Charitie-sur-Loire and Nevers, preferably when shops were open.

Get Deborah price drops
250,000+ people have entered their email

Likewise, the boat is pretty sparse on evening entertainment or enrichment. Afternoon activities when the boat is cruising are limited to sitting outside and watching the scenery go by; the appearance of a lock causes much excitement. (We did love the onboard wine tasting that the staff organized when a visit to a farm fell through; based on passengers we talked to, this type of enrichment should be added to every sailing.)

Despite these issues, we count our trip on Deborah as one of the best we've experienced in Europe. Barges travel slowly at 4 mph; we found that we, too, reduced our speed, taking time for lengthy conversations, convivial meals and long evening walks around small towns. The Frenchness of it all has an effect; we already enjoyed cheese, but after seeing the love and attention that the staff lavished on it, we'll never put a cheese plate together the same after this trip. Plus having more passengers onboard than other barges meant we weren't stuck talking to the same two people all the time. For those who are looking to give French barging a whirl, at a reduced price compared to other companies, Deborah is practically perfect.

Like all CroisiEurope ships, Deborah attracts international passengers; you'll be almost guaranteed to have French passengers onboard. CroisiEurope tries to make sure that more than a few English speakers are on sailings together, as the line wants to avoid a situation where only two people speak a language. English-speaking travelers are typically American, British, Australian or South African. Announcements, shore excursions and meals are presented in both English and French and all staff are bilingual. Most passengers are baby boomers, aged 60 and up.

Deborah is a very casual ship. During the day, passengers wore jeans, T-shirts, capris, shorts and pants, and often the same clothing was worn at dinner. You'll want good walking shoes for excursions and wandering in the small towns after docking. Once per cruise, there's a "gala" night where people dressed a little nicer -- sweaters, dresses, collared shirts -- but no jackets, formal dresses or heels are required.

Deborah includes quite a bit in the fare. The price includes shore excursions, transfers to the ship from Paris and back, most alcoholic and nonalcoholic drinks (with the exception of premium wines and liquors), use of bikes and Wi-Fi. Gratuities are not required on CroisiEurope. The currency onboard is the euro.

Where does CroisiEurope Deborah sail from?

Where does CroisiEurope Deborah sail to?

How much does it cost to go on CroisiEurope Deborah?

What a pleasure to cruise on a barge

We opted for the barge Ms Deborah, which cruises on the canal de la Loire, with the Briare to Nevers’ route.Read More
jcwer

There is no elevator so one must be able to go up and down the staircase.There is one handicapped cabin on the main deck.Read More
greatsloer