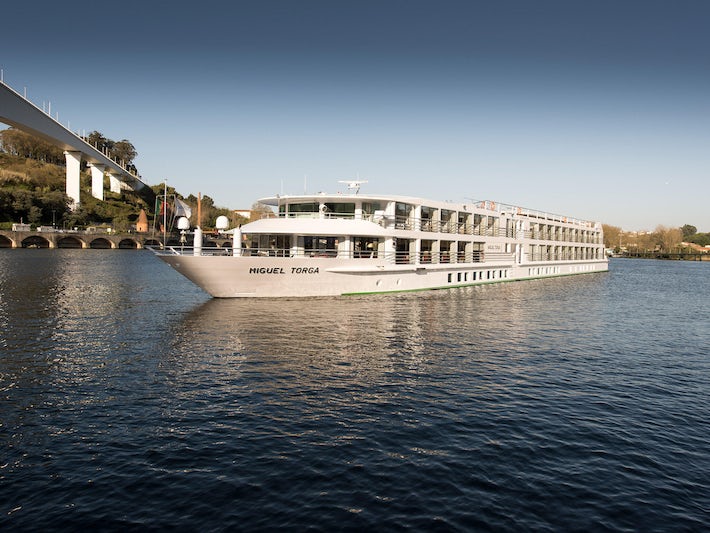 Launching at the start of the 2017 season, Miguel Torga is the fifth CroisiEurope ship on the Douro and the second in the company's 5 anchors-class, alongside Gil Eanes, which launched in 2015. The ship is noticeably more modern and contemporary than the three smaller sister vessels, Infante don Henrique, Fernao de Magalhaes and Vasco de Gama, which all launched at least 14 years ago.

Lack of choice at lunch and dinner; you eat what you are given

A superior addition to CroisiEurope's Douro fleet, in line with modern cruise standards

Miguel Torga operates a single eight-day round trip cruise from Porto, traveling as far as the Spanish border, to visit Salamanca. Aside from Salamanca, which is a full day excursion, the itinerary blends half-day scenic cruising with half-day excursions.

Miguel Torga was a famous short-story writer and poet, born in the Sabrosa region of north Portugal in 1907. This tribute to a Portuguese icon and local hero is accentuated by subtle design features around the ship, the black and white photographs of Douro regional landmarks and views decorating public areas and in each cabins, as well as the use of a rich ruby red for onboard textiles. House port is featured in the inclusive drinks menu and evening entertainment showcases Portuguese traditions, such as the fado, a musical genre popularized in the early-19th century.

The onboard atmosphere is relaxed and friendly, with a European vibe and a French bias. It's not exclusively French -- you will find a mix of passengers from across the world, and customer-facing staff all speak English, although a few drink orders were lost in translation. This is an ideal ship for an outward-looking cruise passenger, willing to mix with other nationalities, who has an easygoing, patient attitude toward the mix of languages being spoken and is understanding when the crew might not get it right first time.

Get Miguel Torga price drops
250,000+ people have entered their email

Wi-Fi is included throughout the ship, which generally benefits from a strong connection, especially when docked in port. The swimming pool on the Sun Deck is a standout feature of this ship, being the first CroisiEurope ship on the Douro to have one. Excursions tend to depart on time, and lunch and dinner are served at set times, but outside of those parameters, you're at liberty to sit back and enjoy the stunning Douro scenery.

Around half of CroisiEurope's overall passengers are French, but the line is investing more in other European and English-speaking markets, so expect to see as many as 50 percent of passengers hailing from Germany, the U.K., Belgium, Switzerland, Scandinavia, the U.S. and Canada, Spain, Italy, Portugal, Australia, New Zealand, Japan and Russia. As a result, the ship has a cosmopolitan atmosphere, with conversations taking place in a number of different languages. Announcements are made in French first, then English and if there is another big group of nationals, expect a third announcement for their benefit. It's a mature crowd, with young couples and children few and far between.

CroisiEurope in general has a very relaxed, unfussy dress code and this ship is no exception. Passengers will want to be comfortable for the daily excursions, which include spells of walking, sometimes on uneven terrain, so flat shoes are advised. Temperatures in the Douro region regularly hit 100 F (40C) in high summer, when cool, light clothing is needed, and sun hats recommended. However, in the shoulder seasons, the weather can be more unpredictable so pack sweaters and rain jackets.

In the evenings, many will change into smart casual outfits for dinner, but Croisi does not demand it. The weekly gala dinner is the dressiest of nights, but still not formal. Leave the cocktail dress and suit at home.

For all nationalities, breakfast, lunch and dinner are included, plus drinks with onboard meals and at the bar, for example, sparkling wine, house wine, beer, select aperitifs and digestifs, water, fruit juices, fizzy drinks and coffee. The exception is the special wine list, Champagne and premium spirits. For example, the house port is included, but for a port aged 20 years, you'll pay 10 euros and a bottle of Moet & Chandon is 49 euros. Small bottles of water are given out ahead of shore excursions and water is placed in cabins too.

Tips are not included, in line with CroisiEurope's French roots, where they are treated as a bonus and not an automatic right. Passengers will find an envelope in their cabin at the end of the cruise, and gratuities are left to the customer's discretion. There is also a gratuities box at the reception desk.

For the U.K. and European markets, the cruise fare, if booked direct, is cruise only, as many passengers opt to drive to the river cruise departure point. American passengers receive shore excursions in their fare, with a choice of two packages: Classic and Discovery. The onboard currency is the euro.

Where does CroisiEurope Miguel Torga sail from?

Where does CroisiEurope Miguel Torga sail to?

How much does it cost to go on CroisiEurope Miguel Torga?

The food, tours and service on the Miguel Torga exceeded our expectations, and we felt very safe with the Covid precautions being taken on board.Read More
cruiserussia