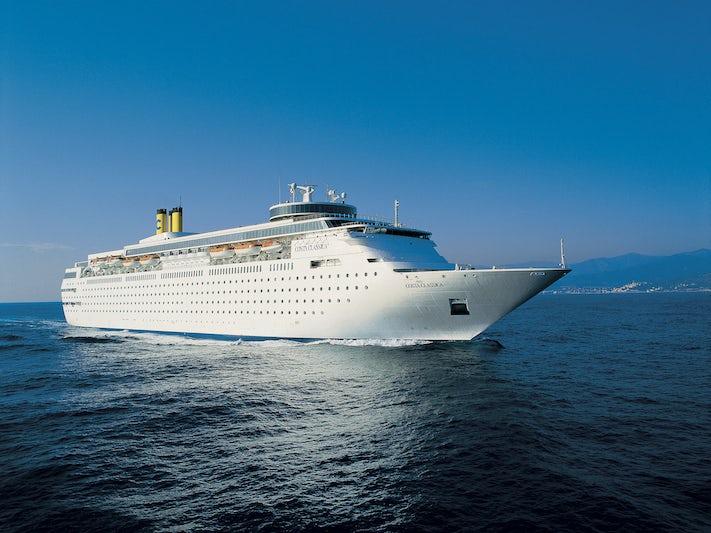 Editor's Note: Costa neoClassica left Costa Cruises' fleet following its final voyage for the line on March 10, 2018. It has been sold to Bahamas Paradise Cruise Line for whom it operates as Grand Classica.

Costa Classica had a total redesign and refurbishment in December 2014 to be reborn as the neoClassica, joining fleet mates Costa neoRomantica and Costa neoRiviera with a new design that aims to create a more intimate atmosphere aimed at adult-oriented cruising. The €22.5m renovations included work on the public areas and guests cabins. The Al Fresco Café was transformed into a natural oasis with trees to create a peaceful park-like environment, as well as a balcony area overlooking the sea. Cabins were refitted with more luminous decor, together with additions of Illy coffee pod machines and Elemis bath products as standard. A new "Stargazer" experience also allows guests to admire the skies through high-quality telescopes, assisted by Costa experts. As with the other ships in the neoCollection, itineraries have adopted the "slow-cruising ethos" of a more destination-focused approach with longer, more relaxed port calls. The hull and engine sections were also refurbished, as well as a complete repainting of the hull.

Costa Classica began life in 1991 as a step towards luxury, and in 1999 there was a plan to stretch it, which was abandoned in favor of an extensive refurbishment in 2000. You can get drunk on the lavish display of art on this ship, set at about $20 million when it was launched, with an incredible amount of sculpture, original painting, hangings, murals and crafts, even for a Costa vessel. The nude figures in the lobby are gone now, and problems with sound carrying in the dining room, which originally reverberated from the Carrerra marble floor, have been solved. With rich wood paneling and the charming leather chairs that have been used in Costa's later ships, this is a romantic ship, from the moment the white-gloved attendants escort passengers to their cabins, and service has real panache.

Since Classica sails in Europe, the ship has a very international clientele, with about 10-20% North Americans. Passengers tend to be ages 45 and over. Although announcements are still made in several languages, Costa limits the length and frequency of them.

Each seven day cruise has two formal nights and a Toga Night; the rest is mostly resort casual; 10-day itineraries have one additional formal night.

Good for Italians Not so Much for English

We booked out own taxi back to the hotel but the Costa representative stayed with us to be sure it worked out.Read More
Melaphil

No better way to see India by sea

Americans on Costa get their water with or without gas free! This was a great surprise for us since I regularly drink water with gas.Read More
buck3647

The staff were always attentive, eager to serve us, even though the ship is old, it was the service that stood out.We also had a lot of Indian staff to manage 300 of us.Read More
binatha

The ship itself was smaller to what I have previously been on but still a good size.The food was really good and the service was amazing.Read More
rmbx