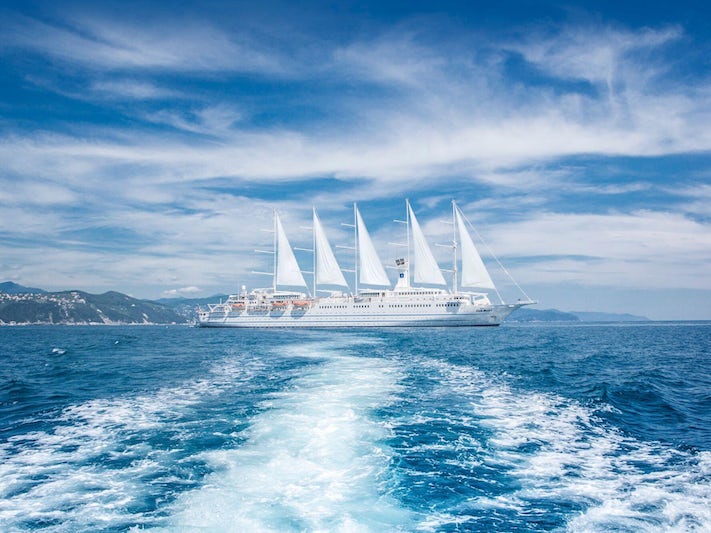 Club Med 2, one of the world's largest sailing ships, will set sail again in December 2022 following a multi-million refurbishment. The vessel is owned by all-inclusive French-owned tour operator Club Med and is part of its Exclusive Collection portfolio which includes high-end resorts, villas and chalets worldwide. The five-masted 386-passenger ship is the only vessel in the Club Med fleet.

Club Med 2 was built in 1992 at the Ateliers et Chantiers shipyard in Le Havre, France, and is a sister ship to Windstar Cruises' Wind Surf. Prior to this year's refit, the last refurbishment was in 2008.

The latest ship-wide upgrade, which blends traditional features with modern amenities, features all-new teak decks and mahogany rails. There are redesigned bars and lounges and the main Monte Carlo restaurant will now include live cooking stations and seasonal menus created by leading French culinary organization Ferrandi Paris, which will reflect the destinations being visited.

New cardio equipment, soundproof flooring and soft lighting have been installed in the fitness center and there is an all-new Club Med Spa in partnership with French luxury spa brand Sothys.

In addition to activities such as sun deck yoga, windsurfing and paddleboarding, new active pursuits including wing surfing -- using a hand-held wing -- and miniature sailboats for two. Other facilities include a children's club for youngsters aged eight to 17.

Club Med 2 has 184 cabins, which have all been refurbished. They are located on the lower three passenger decks of the six-deck ship and come in three categories ranging in size from 193 square feet to 420-square-foot suites.

Want to See the Changes First? Club Med 2's First Voyage After Refit is in December 2022

Fresh from the shipyard, Club Med 2 will sail on a 14-night repositioning crossing from the Portuguese capital Lisbon to Fort-de-France on Martinique, departing on December 5, 2022.

Club Med 2 Itineraries Switch Between the Mediterranean and Caribbean

The ship, which is also equipped with two engines, follows the sun and sails under wind power whenever conditions allow. After the transatlantic crossing Club Med 2 will spend the winter in the Caribbean, embarking on a series of seven-, eight- and nine-night sailings taking in islands such as Grenada, St Barts, the British Virgin Islands, Cuba and the Grenadines.

In March 2023 the ship will cross the Atlantic to spend the summer sailing around the Mediterranean coastline on itineraries that include a nine-night cruise to the Canary Islands and Morocco. Due to its small size, Club Med 2 is able to dock at smaller ports that are inaccessible to larger ships such as Italy's Portofino, Nice in France and Tobago Cays in the Grenadines. There are also themed golf cruises in the Mediterranean and special family sailings during school vacation.