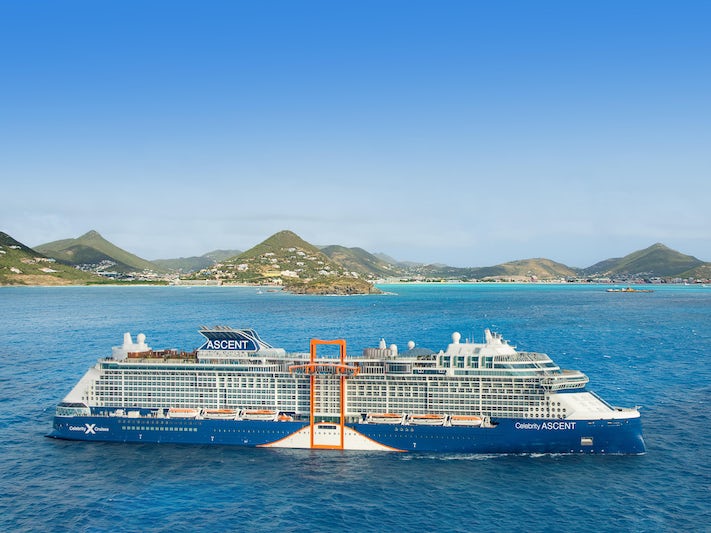 The fourth and final of Celebrity's Edge class cruise ships, Celebrity Ascent, will launch in fall 2023 and will feature several innovations debuted by Celebrity Edge, Celebrity Apex and Celebrity Beyond.

Celebrity Ascent will have a double passenger capacity of 3,260 people. The ship is larger than the line's Millennium-class ships but slightly smaller than the Solstice Class.

The stand-out features on the Celebrity Ascent deck plan include The Magic Carpet, a movable deck cantilevered off the side of the ship which moves from decks 2 to 16. The space serves multiple purposes as a restaurant, a bar and an embarkation area.

The Infinite Balcony cabins are designed to blend indoors and outdoors, and adding almost a quarter of the size of the cabin by using bi-fold doors. The ship will have 918 Infinite Veranda cabins, including 16 single-accommodation rooms, the first time Celebrity has catered specifically for solo travelers.

Each coming in at more than 5,000 square feet, the Iconic Suites are located above the bridge, facing forward, giving occupants the same view as the captain. Iconic Suites have two bedrooms and 700-square-foot balconies placed over the bridge wing. Balconies will have private Jacuzzis and cabanas.

For those who want maximum room, the Edge Villas are two-level suites which features an elevated master bedroom, large living room and two full bathrooms. The six Edge Villas will each span decks 14 and 15. Each Edge Villa balcony will feature a private plunge pool

The Retreat is free but only available to passengers staying in suites. The space includes a private pool and sundeck, lounge and restaurant. The lounge will serve breakfast and host a happy hour daily.

The main pool area is known as the Resort Deck. It features a large pool flanked by sculptural trees and two "martini glass" Jacuzzis that overlook the deck below.

The Rooftop Garden space combines the popular top-deck Lawn Club found on the Solstice-class ships with the Rooftop Terrace that is so popular on Millennium-class ship. The Rooftop Garden is an area filled with live greenery inspired by childhood playgrounds. The sculptures double as seats for musical performers. During the day, The Rooftop Garden will host yoga and various games and activities. At night, passengers can show up for live music and the line's A Taste of Film, which pairs movies and dining.

Within the Rooftop Garden will be a Rooftop Garden Grill, a for-fee alternative eatery, which will serve gourmet burgers during the day and transform into a swanky barbecue joint at night.

Another alternative dining venue on Celebrity Ascent will be a raw bar on Deck 5.

The line's suite-only Luminae, which is a partitioned section of the main dining room, has been turned into the Luminae at The Retreat, a standalone restaurant located on Deck 11. Luminae will serve breakfast, lunch and dinner.

Celebrity Ascent's Maiden Voyage Will Be In the Caribbean

After its debut, Celebrity Ascent will spent the rest of 2023 and winter 2024 sailing week-long cruises from Fort Lauderdale's Port Everglades. The itineraries will alternate between Western and Eastern Caribbean, and include stops at favorite ports and islands on both routes.

Celebrity Ascent will be 140,600 gross registered tons and 1,073 feet long. It will carry 3,260 passengers at double occupancy. It's being built at Chantiers de l'Atlantique in Saint-Nazaire, France; the first piece of steel was cut in November 2021.

Get Celebrity Ascent price drops
250,000+ people have entered their email

Find a Celebrity Ascent Cruise from $929