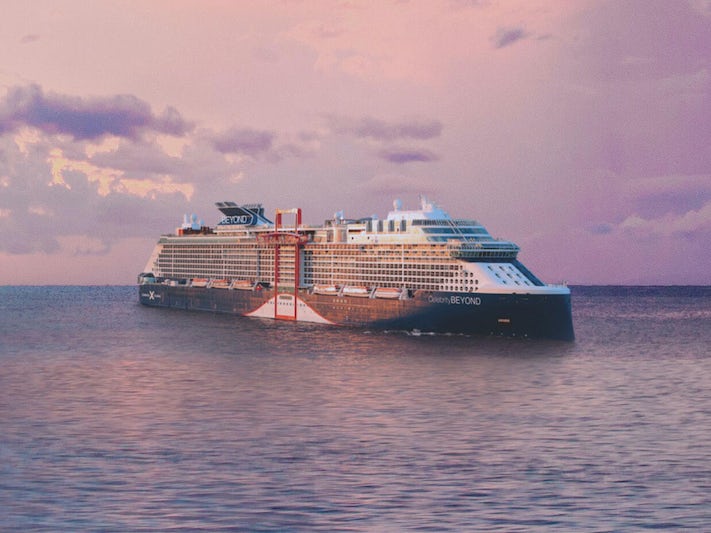 Celebrity Beyond is Celebrity Cruises' third Edge-class ship, and, normally, you wouldn’t expect a lot of change from one ship to the next. But so many improvements have been made to the 3,260-passenger vessel, including adding length as well as an extra deck, that the Celebrity Beyond experience does, in fact, surpass its predecessors.

The most popular areas have been redesigned. More and different types of suites have been added, with enlarged and improved amenities. Bars and theaters have been added and upgraded. The ship features more stylized design from names such as Kelly Hoppen and Nate Berkus; a new menu and better entertainment in the unusual Eden space and a restaurant from Michelin-starred chef Daniel Boulud, his first at sea.

It all adds up to an onboard experience that is sophisticated, chic and adult-focused with a bit of flash; while Celebrity does allow children onboard, the vibe is not family forward. Think chic and urbane, with a raft of inclusions -- drinks, tips and Wi-Fi -- meant to make an upscale vacation at sea a no brainer.

With an additional 65 feet of space, Celebrity Beyond's deck plan has more room in exactly the right areas. The ship's buffet, the Oceanview Cafe, has an enlarged bakery and a bar convenient to the pizza, as well as two additional food stations.  Seating areas created by British designer Kelly Hoppen have been added at the ship's main pool, the Resort Deck, and the for-fee cabanas there now face the right direction: the pool where the action is.

Other outdoor areas where you'll notice more space than on Beyond's sister ships include the Rooftop Garden, which has become more usable, with more arty coverings to protect loungers from the elements. You'll find two plunge pools in this area, although be warned that these are not hot tubs and also give people walking by a distorted full body view of those swimming, not unlike a fun house mirror.

The Sunset Bar at the back of the ship is the most notable renovation on Celebrity Beyond. American designer Nate Berkus has transformed the space into a terraced, two-deck area heavy on Moroccan and Mediterranean influences. It's a fabulous place to linger, not just at sunset but even during the heat of the day, as there is plenty of shaded seating.

Inside the ship, the deck plan around the central Grand Plaza has been altered slightly to make room for a new bar, World Class, which features craft cocktails. The Martini Bar and the large chandelier that flashes and plays music has also been centered within the Grand Plaza, allowing more people to enjoy the "flair" of the talented bartenders. Fine Cut steakhouse no longer has an outdoor area; instead the specialty restaurant has more seating, including in "wine barrels" that overlook the Grand Plaza action, as well as supersized window seats for romantic sea views at dinner.

Celebrity Beyond Rooms Include New Suites with Expanded Retreat, Watch for Overhang

If you're looking for the suite life, Celebrity Beyond has more choices than before, and the amenities are also upsized. Highlights include the 1,892-square-foot Iconic Suite, where you're treated the same views as the bridge with a ton of private outdoor space. There's also a two-story Edge Villa that has fantastic design by Hoppen, as well as its own cute plunge pool.

That said, be careful with where you book your suite, or room, particularly if you're a sun lover. Because the top deck on Celebrity Beyond stretches a bit over the ship itself, many of the rooms on the higher deck don't get any sun on their balconies (infinite or otherwise). If you like to sit outside on your own deck for sun, you'll want to avoid these, as well as the rooms that sit underneath the Magic Carpet.

And to be honest, sun in your room might not matter, as the Retreat area for suite guests has an extra deck and more space, as well as a larger lounge. Luminae, the suite restaurant, is also nicer and larger, with better views.

AquaClass lovers also have a new choice in rooms, with Sky Suites that combine the spa amenities of the category with Retreat access and personal concierge service. Still, we were surprised that the AquaClass upgrade didn't come with any changes to Blu, the dedicated restaurant. It's still walled off, without windows and a lot of natural light.

Food on Celebrity Beyond: Lots of Choices, Daniel Boulud's Le Voyage is a Winner

Like other Edge-class ships, Celebrity Beyond has four smaller main dining rooms that are included in the fare, as opposed to a large, traditional main dining room. This set up means that eating out always feels intimate and less "banquet-hall" than on some other cruise lines.

The Oceanview Cafe buffet also has plenty of choices, at all hours of the day; the new bar at the pizza area, plus the proximity to the Sunset Bar makes it a nice choice if you want to stay casual. The Sunset Bar also has a new menu of $8 eats, such as hummus and flatbreads, for afternoon noshes. You have to search to find some venues; the Mast Grill is particularly hard to find on the Resort Deck, and many people forget about that healthy choices are available at both the Solarium and the Eden Cafe.

Specialty restaurants on Celebrity Beyond abound, from sushi at Raw on 5 to upscale outdoor at the Rooftop Grill. While the Fine Cut steakhouse has served as a traditional date night splurge, we prefer Eden, which has a new menu from Celebrity's own Cornelius Gallagher centered around seafood and fresh ingredients. The dishes here appear as works of arts, and the cocktails are no slouch either.

The star of Celebrity Beyond's dining is Le Voyage, the first restaurant at sea from Daniel Boulud (who has his own Michelin stars). It's a stunning space, with dishes inspired by Boulud's international travels; the French menu has Thai, Brazilian and other global touches. You'll feel like you're in a fancy land restaurant -- our meal lived up to the $75 price tag.

For the most up-to-date testing, masking, and vaccination requirements aboard Celebrity Beyond, please refer to Celebrity Cruises' health and safety protocols. You can also refer to Cruise Critic’s guide to masking requirements on the world's major cruise lines.

Costs Included in the Fare

· Meals in the four main dining rooms, the Oceanview Cafe buffet, room service and select other eateries
· All theater shows and most entertainment options
· Most daily activities, unless otherwise noted
· Use of the fitness center
· Gratuities (US)
· Wi-Fi (US)
· Beverages, including carbonated drinks, bottled water, juices, premium coffees and teas, and beer, spirits, cocktails and wines by the glass up to a certain amount. (US)

Costs Not Included in the Fare

· Automatic gratuities for beverage, mini-bar, spa and salon purchases (20 percent for all)
· Mini-bar purchases
· Bottles of wine
· Meals at several specialty restaurants and snack venues
· Spa treatments
· Most fitness classes and all personal training sessions
· Access to the ship's Sea Thermal suite (except for people staying in AquaClass staterooms, for whom entry is free)
· Activities like alcohol tasting events
· Shore excursions
· Photographs and artwork

Who Is Onboard Celebrity Beyond?

Celebrity Cruises has gone out of its way, more so than any other premium cruise line, to promote diversity. Recently the line held a photo shoot on Celebrity Beyond showing under-represented groups enjoying a cruise on the ship, led by photographer icon Annie Leibowitz. Meet-ups for solos and LGBTQ+ passengers take place daily, and a Pride Night is held every cruise.

Gender equality is also a hallmark of Celebrity, and no one is a better personification of that than Captain Kate McCue, who helms Celebrity Beyond. With large followings on TikTok and Instagram, McCue has made sure that the officers on her bridge are 70% female.

You'll find Americans and Brits as the primary passengers on Celebrity Beyond, although the ship does draw from a diverse international base. Couples and groups of friends are the norm, although you might find Gen Xers traveling with their Gen Z adult children. While families aren't discouraged on Celebrity Beyond, the ship doesn't have waterslides or other attractions that might attract younger children.

Get Celebrity Beyond price drops
250,000+ people have entered their email

Find a Celebrity Beyond Cruise from $599

More about Celebrity Beyond

Where does Celebrity Beyond sail from?

Where does Celebrity Beyond sail to?

How much does it cost to go on Celebrity Beyond?

This was our fourth Celebrity Cruise and about 10th overall. There is just something different and special about Celebrity. And the Beyond takes it up another notch.Read More
lqrescigno

I am currently sat in the Cafe on the ‘Celebrity Beyond’. The third ship in the ‘Edge’ class of ships.Read More
randomvoyagestuff

Celebrity Onboard credit is now non refundable. Catch is, if you want premium dining, excursions, the credit isn't posted until well beyond when such things are easily available.Read More
GeorgP

When we saw the details for Beyond we decide to book this cruise around the Greek islands. Our first cruise in 2½ years. The ship is absolutely beautiful and really well laid out.Read More
frostydog