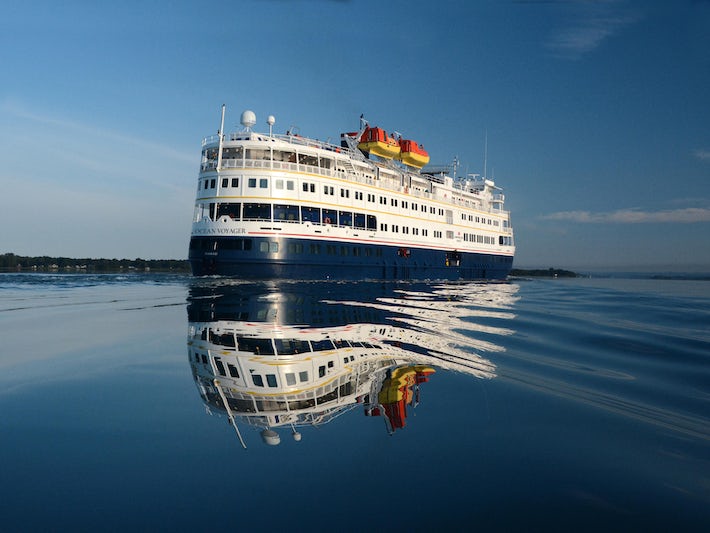 Operated by American Queen Voyages, which specializes in North American cruises, the 202-passenger Ocean Voyager offers a relaxed way for U.S. passengers to explore their continent and for cruisers from further afield to discover big-name destinations including all five Great Lakes.

The five-deck vessel -- launched in 2001 and refurbished in 2019 -- is very comfortable and offers an intimate small ship experience and that’s one of the factors that draws back repeat passengers, mostly seniors, to this ship, as well as identical sister vessel Ocean Navigator and the line itself. The ever-smiling crew members offer high levels of conscientious personal service. You can expect them to address you by name within a couple of days and remember your favorite cocktail and food preferences.

There are two restaurants, outside deck space for lounging in warm weather and the enrichment program supports the in-depth exploration of destinations that include the Great Lakes and St. Lawrence Seaway, Canada and New England and the southeast U.S. Fares cover a high number of inclusions, such as included tours in every port and all drinks.

The social hub of the ship is the Compass Lounge and the adjoining pub-style The Tavern.  These two rooms form the heart of the vessel, particularly on sea days, and during the daily cocktail hour when canapes are served and for after-dinner drinks and entertainment. And as all drinks, aside from premium bottles of wine, are included in the fare, it's probably no surprise that the ship has such a convivial atmosphere. Any solo cruisers will quickly make new friends and as nothing ever feels rushed or overly busy, crew members have time to stop and chat.

Passengers looking for all-dancing all-singing entertainment won't find them on this ship and aside from daily music, when the ship is sailing the onboard vibe is fairly quiet and most folks relax with a book, watch the passing scenery, mingle over a coffee or cocktail with fellow passengers or treat themselves to a massage or treatment in the small spa.

There's space outside, with loungers and chairs on the traditional wooden decks. It would be a nice additional touch if the ship had a hot tub on one of the sundecks.

For a ship of its size, Ocean Voyager features a pretty big number of cabin grades; seven in total. That said, cabins are on the small size compared with newer ships and start at 146 square foot. A minor curiosity is that the smallest cabins are not the cheapest, so study the deck plans before booking.

All staterooms are ocean-facing with fixed windows and, aside from the two Owner's Suites, they don't have walk-out balconies. The cabins are spread over four decks and are priced according to their position and whether or not they have a "veranda" The four lead-in cabins, which are actually bigger than some others, are located at each end of Deck 1.

Aside from the two suites, the size of the cabins means they are made for function rather than lounging during the day. However, the immersive itineraries on Ocean Voyager mean you are probably going to spend time out on shore tours and exploring destinations independently and most onboard time will be in the lounge, bar or on the open-air top deck. When it's time to sleep, the cabins may be compact but they are well appointed and the beds are comfy.

The ship offers two restaurant options; the main Coastal Dining Room on Deck 1 and The Grill up on Deck 4, which is the place to go for panoramic dining with a view. We really liked the fact that portion sizes are not overwhelming, but if you want more then of course you can order it.

Lobster lovers should note that this is not a ship where it is limited to one special dinner per cruise but is one of the always available options in the evening. Vegetarian choices are good (and special dietary requirements can be accommodated) and carnivores can tuck into roast prime rib of beef that's featured in The Grill carvery each night.

Lack of staterooms with private balconies

Who Is On Board Ocean Voyager?

The ship attracts mature and well-traveled couples, mostly aged 60 and up, with a handful of solo cruisers. The majority are American, many traveling with affinity groups such as Road Scholar, and a large number are repeaters who are big fans of the American Queen Voyages brand.

There are also some families with adult children and a sprinkling of other English-speaking nationalities such as passengers from the U.K. It's rare to see any young children.

Daytime: Smart-casual attire is appropriate during the day, right through dinnertime. It's wise to pack walking shoes, sweater or fleece, rain jacket and umbrella for shore tours.

Evening: There are no formal nights, though the captain's welcome and farewell dinners are a bit dressier. Women will be comfortable in skirts or slacks with a blouse or a casual, rather than formal, dress. Men generally wear slacks and shirts. Jackets are totally optional.

Not Permitted: No shorts in the dining room at dinner.

The name of the boat changed to Ocean Voyager pre-cruise, which added to the confusion. Embarkation port changed and itinerary changed with cancelled ports. Crew and food were wonderful!Read More
ReppEgspit9

We drove to Jacksonville for the pre cruise hotel and COVID testing and boarded the next day.We are in our Seventies and we were the youngsters on the cruise.Read More
bxny

The Good, the Bad, and the Ugly

Went to the ship the next day and were pulled out of line and literally dragged into the medical center on the boat to have "quick tests" administered - no explanations or apologies - but our tests apparently were negative, so we were sent to our cabin - which - had been changed with no explanation.When we were instructed to leave the ship there was no one to help take him off with the wheelchair - I was going to walk his walker off behind the wheelchair - fortunately a passenger saw our dilemma and pushed him off the ship and into the luggage area.Read More
dennis73

The guides were great and knew exactly what they were talking about!I’ve always wanted to sail the Great Lakes and was excited when I heard about Victory.Read More
Seeayyyytee_4