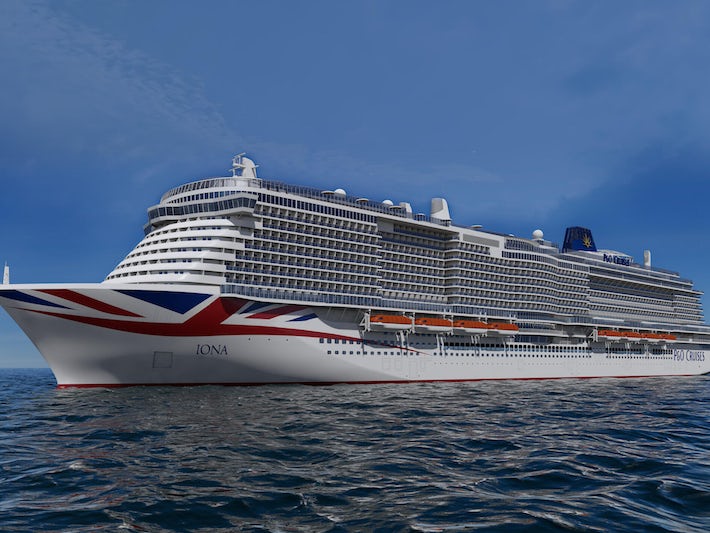 Iona is the biggest cruise ship ever built for the UK market, packed with entertainment venues and more than 30 places to eat and drink. With a capacity of 5,200 passengers, the ship has the feel of a lively but classy floating resort.

The ship is certainly striking. At the heart of Iona's deck plan is the dazzling Grand Atrium, with walls of glass on both sides spanning three floors, filling the space with light and sea views. Polished white marble and gleaming chrome add to the elegant, airy feel, while a curved marble staircase sweeps down into the centre.

The SkyDome is another 'wow' moment at first sight and a first for P&O Cruises, too. An enormous glass dome covers a double-height space on Decks 16 and 17, which serves as a pool, drinking and dining venue by day and a dramatic entertainment space in the evenings. Other intriguing features making their debut include a boutique, four-screen cinema, an intimate nightclub masterminded by ex-Take That frontman Gary Barlow and the first gin distillery at sea.

There's a lot that's well planned about this ship. Instead of one big pool and the overcrowding that can bring, there are two infinity pools on the cascading aft decks, the indoor SkyDome pool and the smallish Beachcomber pool on Deck 18, which spreads passengers out efficiently.

Conservatory Mini-suites are a High Point of Iona Cabins

New for Iona are 95 Conservatory Mini-Suites, a brilliant midway option between a balcony cabin and a suite. Iona’s Conservatory Mini-Suites offer a soothing space featuring a deeper balcony with a glass-enclosed sitting area. One of the perks of this room type is it allows passengers to open the area up to create a bigger outdoor space or close it off from the main cabin. This function is handy if you're travelling with a young child and you want to continue your evening after you've put them to bed.

Entertainment and Restaurants on Iona Target a Younger Crowd

Iona is a departure in tone for P&O Cruises. It's clearly aimed at a younger demographic than the line's more traditional ships, in the style of the entertainment, nightlife and restaurants.

There are nods to tradition in the formal gala nights (rebranded as Celebration Night); the captain’s midday announcement (sadly inaudible) and familiar restaurants and watering holes that P&O Cruises regulars expect, including Sindhu, Epicurean, Brodie's pub and the Crow's Nest lounge. But in other areas, there's big change; open-seating dining, for example, and the requirement to book literally everything via the MyHoliday app.

Food on Iona Offers Plenty of Variety, But Not Everything Works

With so many bars and restaurants, food on Iona offers plenty of variety and you really could eat and drink somewhere different every day. The concept of lots of smaller restaurants instead of a few huge ones means the ship doesn't feel crowded.

Not everything works. Some of the new restaurants feel soulless, like The Keel & Cow. There's a frustrating adherence to exactly what’s on the bar menus, so you can't, for example, get a martini in the Crow's Nest; you can only order from the fixed menu. There's no turndown in the cabins anymore (suspened during Covid, but never re-instated), which feels odd for anybody who enjoys the sense of luxury a cruise brings. The Wi-Fi is also extremely expensive, at £140 for a week of unlimited use for just one device.

Overall, though, Iona is an impressive ship, packed with quality entertainment and likely to be a huge hit with younger cruisers looking for nightlife, good food and affordable entry-level pricing.

P&O Cruises requires all adults to be fully vaccinated. Children from five upwards who are not vaccinated must take a PCR test within 72 hours before embarkation or on the day of embarkation.

Get Iona price drops
250,000+ people have entered their email

Where does Iona sail from?

Where does Iona sail to?

How much does it cost to go on Iona?

Cruises on Iona start from per person.
Iona Cruiser Reviews

Ship too big for Fjords

Some Niggles But Generally Good