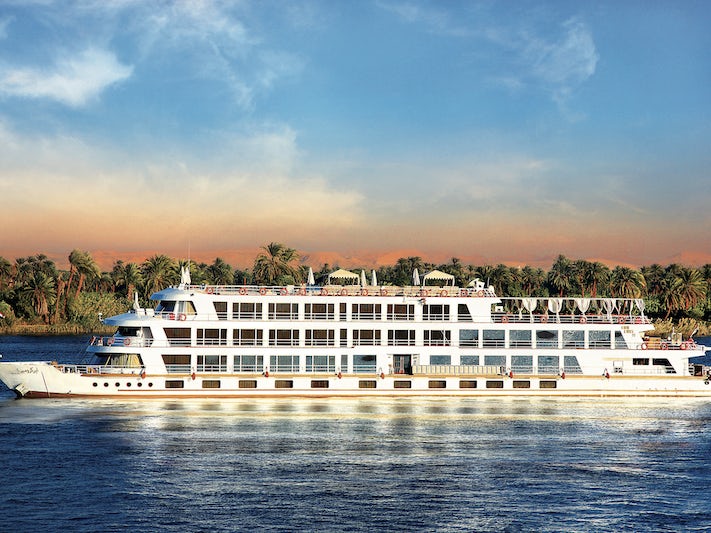 Abercrombie & Kent's cruises on Sanctuary Sun Boat IV provide an understated level of luxury along Egypt's Nile. The boat -- which is owned by fellow luxury operator Sanctuary Retreats but chartered by A&K -- is not as opulent, as some cruisers seemed to expect from the brand. Other A&K offerings from cruises to tours seem to be more upmarket. Keep in mind that the boat and itinerary has been in the market for some time, as A&K was one of the first to present a luxury cruise on the Nile. Think of the experience and the boat as a nod to the classic past, versus a reflection of the company's jet-setting present. Therein lies the charm and the allure of it all.

Small size and experience in the region means exceptional service, enrichment and excursions

Decade-old refurb; aesthetics are dated and bathrooms small and without shower curtain

The ship and local crew reflect A&amp;K's commitment to service, enrichment and safety

Even more alluring, Sun Boat IV provides a staff-to-passenger ratio of 1.3 to 1. The company's unrivaled service, together with the expertise that they have with the antiquity sites, had us missing and or beating long lines throughout. That was a true luxury and greatly appreciated in the Egyptian heat. The extra step was ever-present, from the private docks the company has in the otherwise bustling Aswan and Luxor ports to helping passengers beating long visa lines upon landing in Cairo.

Our four-night river cruise was bookended with two-night stays on each end in Cairo, at some of the city's best hotels, The Mena House (a stone's throw from the pyramids) and The Four Seasons Hotel Cairo Nile Plaza, respectively. The iconic pyramid view from Mena's hotel balcony one night one was tough to top. The expansive Nile view in Cairo, enjoyed from the Four Seasons sweeping balcony, came close.

The cruise itself consisted of four action-packed days of shore excursions, accompanied by one designated Egyptologist throughout. One of our nights onboard included a traditional galabeya party, in which passengers, both men and women, dressed in traditional Egyptian clothing. The event became authentic when belly dancers, whirling dervishes and musicians arrived.

A&K provides a few exclusives, which for us was a visit to the tomb of Nefertari in the Valley of the Queens. In addition, we sailed by felucca (traditional sailboat) a few times; to the Aswan islands early in the trip and later on, to the off-the-beaten-path Dendera, one of Egypt's best-preserved and less-frequented temples. The finale was our final flight, post cruise, to Abu Simbel for an overnight stay before returning to Cairo to close out the trip. It's a perk that is not included in all Nile cruises, or it requires an extra payment.

As for the ship itself, the now 20-year-old boat was last refurbished 10 years ago. With its Art Deco-inspired decor, warm teak floors throughout and Egyptian marble on the sun deck, the boat seems classic; although it boasts modern sunshades on the sun deck, it does feel like it could use a more contemporary update.

Food and beverages were very good throughout. If one takes the boat on a Sanctuary cruise, only meals and sightseeing are included. The Abercrombie & Kent version includes that, plus transfer, drinks (during lunch and dinner), tips and the hotel accommodations on both the front and back ends.

A&K has an international fan base for its tours, however the audience for the Egypt & Nile cruise is largely American. They also tend to get British, European, Canadians and Australians. Announcements onboard and guiding ashore are all done in English, but guides can be arranged for German, French, Spanish, Chinese and Japanese-speaking passengers.

A&K seems to attract a younger passenger base than other river companies on the Nile. Many of the company's devotees who have taken more adventurous tours around the world to Peru, Africa and Galapagos stick with them on the Nile, as well. The passengers range between 35 and 65, give or take a few years in either direction.

During the day, passengers tend to wear casual clothing to keep comfortable and cool in the blazing Egyptian heat. Linen, loose clothes, big hats, sunglasses and sunscreen are highly recommended, as are sneakers and other very comfortable shoes. There is a lot of walking around during the day, which can be precarious at times in and around the antiquities, so comfortable shoes are a must. There is a sun deck and a small dipping pool. Pack your suit and sunning accessories, like a nice cover-up.

Even with the pool, passengers are requested to wear shoes, shirts and trousers/shorts in the lounge, dining room and library. At dinner, men are asked to wear long trousers for dinner and a jacket for the farewell dinner. People do tend to dress at night for dinner and cocktails, but there is no pressure to do so.

For the traditional galabeya night, the clothing is provided, with people picking out and trying on the outfits in the onboard gift shop. What is worn is then gifted to passengers to take home – a nice souvenir.

Abercrombie & Kent's Egypt & the Nile is a 10-day land/cruise program that includes a four-night Nile cruise, accommodations, shore excursions, private arrival and departure transfers, drinks (beers and house wines only during lunch and dinner meal service), internet access, porterage of two bags per person and tips for everyone but the Resident Tour Director.

Abercrombie & Kent has many exclusive moments and special amenities included on their trips, no matter where in the world you go. A few of those include Ride Like a Local -- you explore a neighborhood by horse-drawn carriage or rickshaw; Chef's Table, where you can participate in a culinary demo and Travelling BellBoy, where your bags magically disappear and reappear in all the right places, with no effort or worry on your end.

In addition, there are several under-the-radar, insider-access opportunities that are not only included, but made possible due to Abercrombie & Kent's smaller groups and long-standing relationships in the area. Depending upon the journey, it can include any and all from private museum openings to visits with locals in their homes.

Could have been great

This was deceptive for an “all inclusive” as we spent much time in the lounge given this was the only spot with free WiFi.All beverages incurred an extra charge in the lounge.Read More
Gutsygirl

Sailing on the Nile

Cruising The Nile With Abercrombie & Kent and the Sunboat IV

The Sunboat (5/5) - We decided at the last minute to upgrade to the Royal Suite on the Sun Boat IV, as it wasn’t that much more expensive.Read More
brianhopkins88