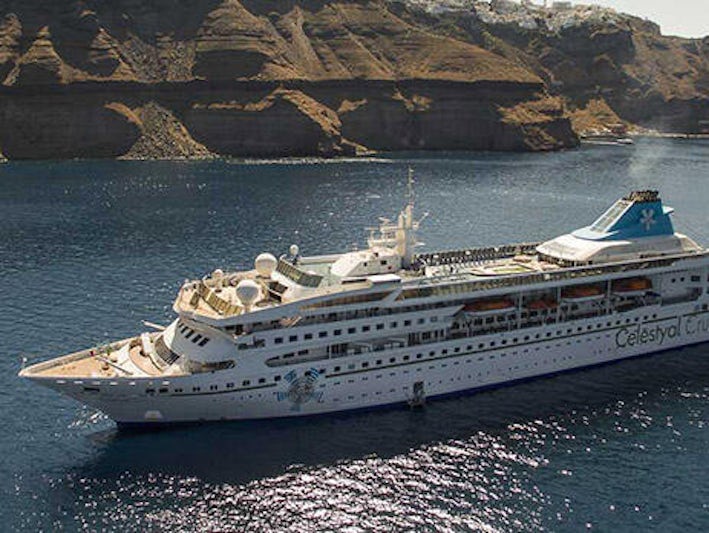 This 1,074-passenger ship was originally built in 1992 by Union Naval de Levante SA in Valencia, Spain, for Crown Cruise Line as the Crown Jewel. Before joining Celestyal Cruises it was the Gemini and operated by the (now defunct) Quail Travel Group as a gambling ship in the Bahamas.

The ship is old and is limited in terms of facilities; inadequate kids' club

Celestyal took delivery of the 19,093 gross ton, 400-cabin ship in late 2015 and put it in for a massive two-month refurb. -- gutting the entire ship, ripping out all the carpets, furniture and fittings; opening up lounges and taking boards down from windows to let in light into public rooms.

The result: an old ship, but one with a fresh, contemporary feel, complete with new fixtures and fittings, carpets, furniture and livery. Nefeli entered service under the Celestyal name as the third and smallest of the fleet in early 2016.

Like its fleet-mates, Nefeli is all about the 'authentic Greek experience' and apart of course from the itineraries, expect Greek cuisine and Greek wine; Greek entertainment (on at least one night) and Greek-themed public rooms.

However, life onboard has an international feel due to the passenger and crew mix; and everything is in English.

Nefeli is a very small ship by today's standards, and it does have its limitations, not least the (unheated) swimming pool and just two hot tubs, a tiny spa and a kids' club which is not adequate for the ship's size. However, it never feels crowded, and there are good flows through the public rooms.

The ship's standout feature is a triple-deck, glass-walled atrium at the back with windows overlooking the sea.

Like its fleet-mates Nefeli offers short, port-intensive Greek-island itineraries, but drops off and picks up passengers at most ports, so you can more or less create your own itinerary. Being one of the few lines to still call in at Turkey (Kusadasi for Ephesus, Cesme and Izmir), it also offers passengers the opportunity to skip those ports by being dropped off and picked up at a neighboring Greek island.

Sadly however, despite all the time, money and effort spent on Nefeli, it's only on lease to Celestyal until the end of the 2017 cruise season.

The ship attracts a wide mix of passengers, predominantly North American, including a number of large school and college groups; and European, with Greek, Spanish, French, German and Italian most widely represented. Ages are across the board, from kids to seniors, multi-generational family groups, and the aforementioned educational groups. During European holiday periods (in particular Greek Easter and summer, ages spike downwards, with large numbers of children). Announcements and literature are all in English and then, as is usual on many European lines, a multitude of other languages, usually: Spanish, French, Italian and Greek, which means they often go on for a good 10 minutes.

Celestyal Cruises operates a casual dress code, as befits its itineraries. With two islands a day, passengers tend to be in excursion clothes throughout the day, putting on a shirt and pants in the evening. There is one formal night a cruise, where men are encouraged to wear a shirt at least, and a jacket (no tux necessary); ladies in skirts or dresses. Note: though it's sunny year-round in the Aegean, take warm clothes at the start of the season (March/April) when it's still chilly and often very windy; if you are traveling in August, wear a hat and sunblock: the Greek sun is merciless in the summer.

After all, it was a great experience for us and we would travel with Celestyal Nefeli again. Thank you for the good memories!Read More
IO2017

If you are looking for a relaxing experience and do not care for the two port of calls per day, Celestyal Nefeli might be a rather poor pick.Read More
Stefan Milicescu

Relaxed through the Aegean

Since our last cruise with Celestyal Cruises we where eger to step aboard again. We choose Celestyal Nefeli, Euphoric Aegean out of Lavrion.Read More
ronnycop

Our Trafalgar tour director "made" our cruise!