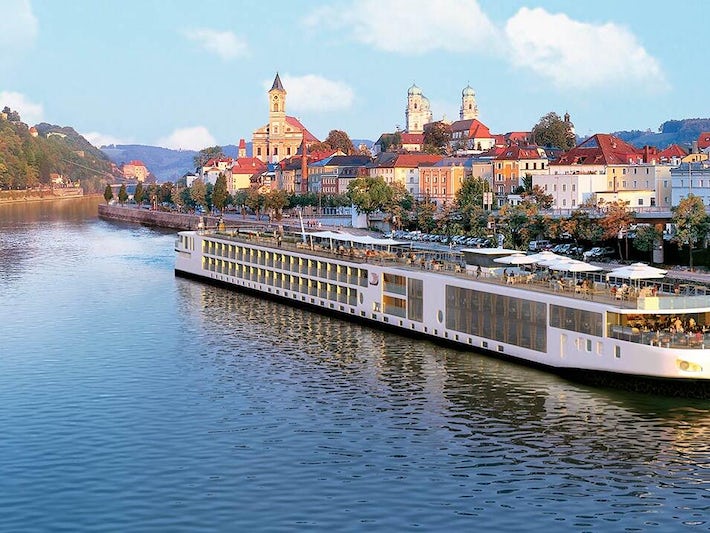 Two-room suites and a high proportion of cabins with verandas are among the features on Viking Rolf, one of six 190-passenger Longships launched in April 2016.

The 443-foot vessel is one of 46 near-identical Longships operated by the world's largest river cruise line. Notable for the number of walkout balconies, which were uncommon on river vessels before the debut of the Longships in 2012, Viking Rolf also features other Viking innovations, including the Aquavit Terrace at the front of the ship. This alfresco lounge is a popular spot for coffee and lighter dining options.

Viking Rolf is the sister ship to Viking Alruna, Egil, Kadlin, Tialfi and Vilhjalm, which sail on the Rhine, Main, Danube and Seine Rivers. The 95 cabins are located on three passenger decks and are bright and airy, thanks to the understated, streamlined decor, which is replicated in the ship's public areas.

Unusually, the largest two-room Explorer Suites, measuring 445 square feet and with a wraparound balcony, are located above the engines at the aft of the vessel. However, the ship has "green" hybrid diesel-electric engines which burn less fuel and produce 20 percent fewer emissions, making Longships cleaner, quieter and with less vibrations than some of their competitors. Also situated near the two Explorer Suites on the upper deck are seven Veranda Suites, which measure 275 square feet and have a bedroom, living room, walkout balcony and French balcony. In addition, there are 20 Veranda Cabins on this deck, which measure 205 square feet including the balcony, and five French Balcony Cabins, all 135 square feet. There are 19 Veranda and 17 French Balcony Cabins on the middle deck, and 25 Standard Cabins on the lower deck, which measure 150 square feet and have a fixed window situated high in the wall.

The Explorer Suites on Viking Rolf are slightly different from its predecessors. For example, there is a fixed rather than sliding wall between the bedroom and living area, and the bathroom now has one wash basin instead of two. As a result, there is a larger shower. For the uninhibited, the floor-to-ceiling shower window overlooking the river can be turned from opaque to clear glass at the flick of a switch! L'Occitane toiletries have now been replaced with the line's own brand of Freyja products.

Viking Rolf's main restaurant is located on the middle deck. Breakfast and lunch feature a buffet with cooked-to-order items also available from the menu. Dinner is a served three-course menu, and can be turned into a more substantial meal with the addition of an extra appetizer, such as soup, and a cheese plate with dessert. Passengers can sample regional specialties themed around the cruise itinerary, plus familiar favorites, vegetarian dishes and an "always available" menu of salmon, steak and Caesar salad. A lighter breakfast and lunch alternative is served in the Aquavit Terrace. There is a complimentary tea and coffee station, available 24/7, with snacks such as cookies and muffins available during the day.

Get Viking Rolf price drops
250,000+ people have entered their email

Viking is an adults-only cruise line; passengers must be 18 to sail.