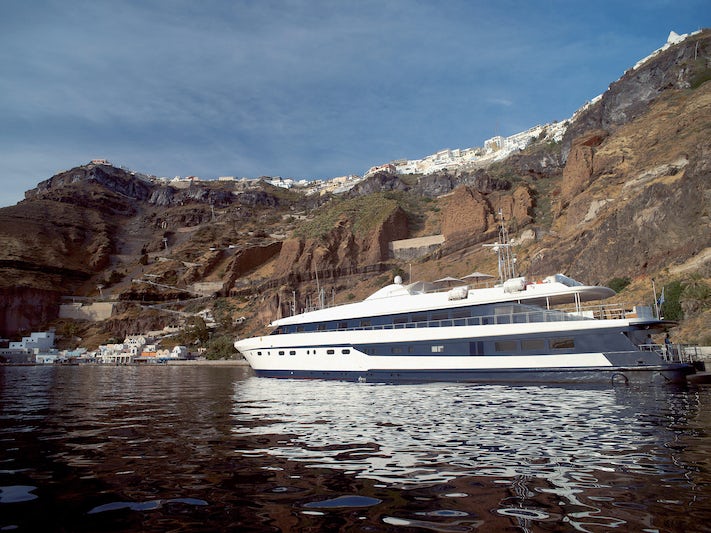 Harmony G is one of five megayachts operated by Variety Cruises, a Greek-owned line specializing in small-ship cruising. Although Harmony G functions like a miniature cruise ship, it blends in seamlessly in port with the large private yachts with its white hull, dark windows and sleek lines. The ship's petite size means you're more likely to be tied up in posh marinas, or alongside at local town jetties, than sandwiched in between big ships in more commercial ports.

Beds in most cabins can't be made into doubles

Like a private yacht experience but without the price tag

The atmosphere onboard is decidedly laid back. This is the kind of ship that attracts people who swear they'd never go on a big ship. There's very little structured entertainment, and the passengers wouldn't want it. The focus is on the destination, with maximum time in port, and on good food. Because there are so many nights in port, typically three or four per week-long cruise when the ship is in Europe, passengers tend to go out to explore in the evenings. On sea passages, people relax on deck, reading. When conditions permit, a highlight of each day is swimming off the watersports platform. The ship operates a short season in West Africa in winter, when there's not going to be swimming (due to crocodiles) but a bigger choice of shore excursions is offered.

The decor is contemporary and comfortable, but don't expect the trappings of a luxury ship. Elements of the experience seem luxurious -- the friendly crew, the excellent local food, the nights in small, glamorous ports -- but others are relatively basic, not least the fact that most cabins have fixed twin beds. Meals are open seating but you'll almost always end up sharing a table in the small dining room, which people seem to enjoy.

Choose Harmony G is you like the idea of a sociable cruise during which the destination and the food are the highlights, rather than frills like balcony cabins, spas and cocktail lounges.

The passenger mix will depend on the area in which the ship is sailing but generally speaking, expect an international mix of French, German, American, Australian, New Zealanders and Brits, in no particular order. There's no defining age range -- when we sailed, in Greece, there was a grandmother with two young children, a mother with teenage daughters, a woman with her 84-year-old mother, several singles from age 30 to 50 and several couples. Everybody was well-traveled, curious and adventurous. The language on board is English, and all documentation and announcements are in English.

There is no set dress code. Passengers wear casual clothes for sightseeing by day and dress up a little bit more for dinner, but there aren't any rules. Nobody wears shorts to dinner, although on hot nights, people might change into something casual later on if they were going to go for a stroll ashore.

What's included changes according to where the ship is sailing. Unusually, in Greece, Variety Cruises offers half-board, so either lunch or dinner is taken ashore at your own expense. Elsewhere, the arrangement is full-board. Drinks are extra, although welcome cocktails and sometimes, a tasting of a local drink (on our cruise, ouzo, served with grilled octopus) are included. Cookies, cake, tea and coffee are available all day and on one afternoon, ice cream with toppings was served. Bottled water is provided at no charge. Tips are suggested at 10 to 12 euros per passenger, per day (which can be added to your final account or left as cash) and there's a program of optional excursions. The onboard currency is the euro.

Small ship that can get near ports but don't expect much