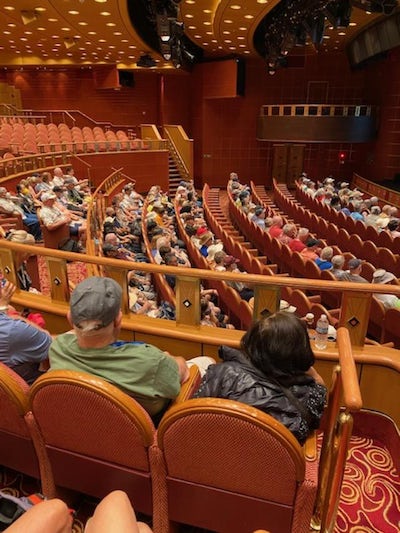 See all photos
Cruiser Rating
4.1
Very Good
202 reviews
Ratings by category
Featured Review
Cruise was great until I broke 2 toes
"Medical staff were great but I was in a boot and wheelchair for the rest of the cruise.Cruise was fine til I broke 2 toes after I fell transitioning from the Hot tube to the deck...."Read More

Cruise was great until I broke 2 toes

Jax2022
6-10 Cruises • Age 60s
Cruise was fine til I broke 2 toes after I fell transitioning from the Hot tube to the deck. there was an area that was uneven and there were no wet floor signs. I think the deck is slippery and I have very good balance and haven't fallen on over 20 years. Medical staff were great but I was in a boot and wheelchair for the rest of the cruise. Dinning staff were excellent and staff in general ...
Read More

Xmas cruise- the good and the bad....

Calimom08
2-5 Cruises • Age 50s
This was my 3rd cruise on Princess, and the first on Emerald. I understand that the ship just came out of dry dock, but I couldn't really figure out what had been updated other than the Effy jewelry boutique that took up a large amount of the shopping area. I'm not sure why Princess cruises made the decision to give so much real estate to such an expensive jewelry store. The pieces are terribly ...
Read More

djminsure
6-10 Cruises • Age 50s
Ok I read all the reviews, I really wanted to see Aruba and since most lines don't sail there I was willing to over look any negative comments by saying you cant please everyone and by owning an insurance agency I realize that some people are impossible to please . I have sailed Carnival twice Rcl twice Msc once , and I've always wanted to try Princess.(love boat and all) I would have given ...
Read More

napunani
10+ Cruises • Age 60s
We sailed EMERALD PRINCESS December 19-27, 2015, in Caribe 742 to Aruba, Curacao and Bonaire. Caribe 742 is the last stateroom on the port side. The balcony is partially covered and is slightly wider than all the other port-side cabins due to the ship’s design at the back. We’ve cruised during Thanksgiving and New Year’s, but this was our first Christmas cruise. Prior to booking, we read about ...
Read More

harrisswansea
10+ Cruises • Age 70s
This was our sixth Princess Cruise and the second time aboard Emerald Princess ( 2009 ) Embarkcation was a breeze mainly due to our Platignum membership. However, when we arrived at our cabin (Superior Balcony on Caribe Deck midships) we were disappointed with its size compared to other cruises taken recently with Cunard, Celebrity & P & O. No sofa bed for daytime use. It was a ...
Read More

mikey4208
2-5 Cruises • Age 60s
I have to tell you, I'm ready to fly home at the next port. I will be more than happy to follow up with a more positive review at the end of the cruise, but day one leaves a lasting impression. On the positive side..the only positive side...check in was a breeze and the people were very friendly. It went downhill from there. I paid double for my own private room and asked to be put in the ...
Read More

First and only cruise

Timogin
First Time Cruiser • Age 50s
My father and I went on the Emerald Princess (dubbed the money pit later by me). Our destinations were Rotan, Belize city and Cozumel. The cruse was great except the elaborate prices for anything other than iced tea or water. Also the gratuity that is charged for ordering a drink at the bar. And I have never seen a casino that charged for drinks to players and then charged gratuity to boot (until ...
Read More

rossterman
2-5 Cruises • Age 60s
First time sailing with princess after sailing with carnival in the past on several cruises. Was very impressed with the condition of the ship, attitude of the crew, and food compared to carnival. Ship seemed less packed with passengers than the carnival cruises and crowd probably were in mid 40's and older (I'm mid 50 so better fit with music, waits at the bar, etc). Still plenty of night life ...
Read More

Another Nice Cruise on Emerald Princess; Dec 7th to 14th

Thombtc
6-10 Cruises • Age 70s
This was the second time we've been on the Emerald. We were on it during its second year in the Mediterranean and now it is seven years old. She still looks very nice and they take good care of her, painting, replacing carpet, etc that we saw while on board. Our mini suite, cabin D114 (portside), was very nice, but we were very forward and did feel the movement a little more than the mid ship ...
Read More

Find an Emerald Princess Cruise from $258