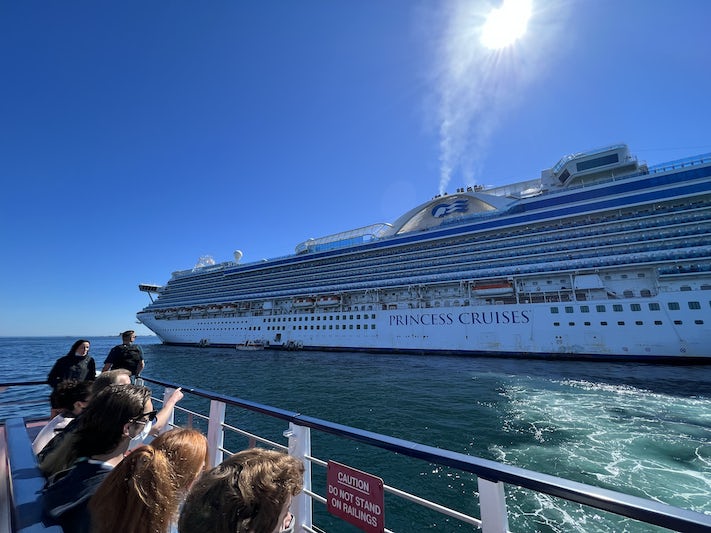 cherubflashpoint
First Time Cruiser • Age 50s
This was my 1st cruise my mam has done several cruises and wanted us to experience one,i was so disappointed found the security staff quite rude when getting on ship,a smile wouldn't go amiss,room was ok and kept nice by staff,i never imagined so many older people thought it would of been a mixed age group,a lot of them were very rude,not a lot to do on there,as I'm a non drinker and not a gambler ...
Read More

kingpower
6-10 Cruises • Age 70s
Hi went on Emerald Princess 26/04/2016 from Southampton getting onboard brilliant cabin excellent new beds are fantastic entertainment acceptable condition of ship even after refit average then lets break down the actual living on ship buffet restaurant is the best place to eat although food could have been hotter choice and standard good the sit down dining is terrible we ate twice in ...
Read More

Second Try at Seeing Rhodes and Not Docking in Crete; What a Disappointment

plumstead
10+ Cruises • Age 60s
We did the Eastern med cruise September 2012, on the Crown Princess, one of the ports I wanted to visit was Rhodes, but because of operational problems we could not dock, so I saw the Eastern Med cruise again for 19th September that included Rhodes again And Crete that I also wanted to see, the night before we were due to dock we got a letter to day our excursion to a beach on Rhodes had been ...
Read More

Neveragain1234at
First Time Cruiser • Age 60s
This was our first ever holiday on a cruise ship, we choose Princess because it had the timing and visits we wanted. We choose a balcony room and paid full fare. I will keep this simple: A Cruise to us is nice food and entertainment 1: We were refused entry to the intermediate restaurants on formal nights (2) even though we dressed in the best we brought with us (Black suit and tie ...
Read More

harry37hverna
10+ Cruises • Age 80s
We picked this cruise by price and destinations. We flew to Istanbul on an afternoon flight arriving about 5:30pm; the ship did not leave until 23:00 hrs. Take our advice and try not to travel on a weekend as the traffic is tremendous and it took nearly two hours from airport to the cruise terminal. As we were late we almost walked straight in, and within a few minutes we were in our cabin ...
Read More

Trip of a Lifetime!

Walshy1000
2-5 Cruises • Age 50s
We sailed on the Emerald from Istanbul to Rome. This was our 2nd cruise having sailed on the Ocean Princess last year. First, embarking was a breeze. Took us about 30 minutes. We stayed in Istanbul a couple of days before getting on the ship. If you have concerns about Istanbul, don't. What a beautiful city. We set sail at night. The ship is beautiful. Our room was a perfect size with nice closet ...
Read More

A lovely ship with superb officers and most staff

windsor26
10+ Cruises • Age 80s
Embarkation was a bit fraught as the staff ignored any priority stickers and still sent you to the long line instead of the correct one. Ignored her and went to Priority everything went well. Nice room - poor steward She was almost invisible and could not make a bed to save her life. She was great at pass the buck [- contact housekeeping - she would say for anything you asked. Not that this ...
Read More

Somewhere between a Carnaval and a Norweigion cruise style

Lorraineblancolo
6-10 Cruises • Age 50s
My husband and I traveled with the Emerald Princess August 15th 2015 for a week eastern Mediterranean cruise. We've been on a selection of previous cruise lines including RCCI oasis of the seas, Carnival, Thompson, Norwegian, Celebrity X. Our ages are late 40s Embarkation Rome Port of Civitavecchia was very smooth and professional and fast we arrived at one and proceeded straight ...
Read More

Go and enjoy your trip.

kazzakjg
6-10 Cruises • Age 60s
We spent 28 nights on Emerald Princess August/Sept and had a fantastic trip as did many others we befriended on the cruise. The ship and crew were absolutely fantastic and most were happy to have a chat and some even gave us advice re how to get around in ports we were doing on our own. The ship is lovely and we can't understand why it is being refurbished soon other than to modernize some areas. ...
Read More

Hop On Hop Off of Cruise Ships

Affiniti
10+ Cruises • Age 60s
From the moment we stepped onboard Emerald in Istanbul there was a complete lack of elegance and sophistication we had found on numerous cruises before aboard the Princess line. The ship was tired, the crew burned out and there was a complete lack of concern. The bedding looked like they had cleaned the floor with it and the bathroom towels were ragged and tattered. We have cruised Princess ...
Read More

Find an Emerald Princess Cruise from $399