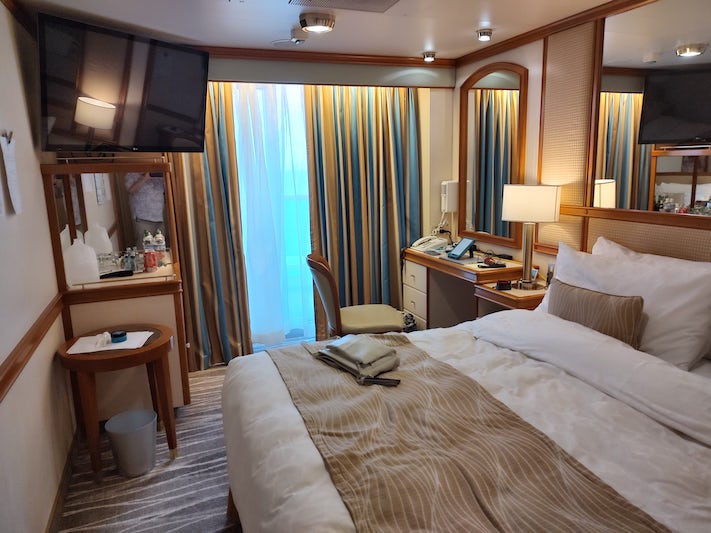 jhbkcb
10+ Cruises
We have been away from Princess for a while. Ours was the British Isles cruise not the transatlantic. We booked through Online Vacations and had 2 nights in London then on to the Caribbean Princess. The transfers worked well, embarkation was a snap. Lunch at the Market Place. A few noticeable changes were silverware in bins on the table and tableside service for all drinks (or anything else ...
Read More

goldiep
6-10 Cruises • Age 60s
We chose this cruise for the variety of ports covered. We enjoy port intensive cruises. Embarkation was pretty smooth. They kind of put you in a holding pattern after check in. I've never experienced this before but it was fine-about a 20 minute wait. The main reason for the average rating? The room. Stained carpet. Stains on walls and doors, door jams. Peeling wallpaper. Black around the ...
Read More

MS2.0
6-10 Cruises • Age 40s
This ship has a strain of flu not yet in the U.S. and is knowingly operating without quarantine or warning at-risk passengers. I saw a cupful of bedbugs found by first time cruisers on their honeymoon, scrubbed black slimemold out of my handicapped shower. I paid too much for my mediocre, passive/ aggressive pedicure. Dining and waitstaff were magnificent, thankfully. As half of a double income ...
Read More

twilightrabbit
2-5 Cruises • Age 70s
My husband and I really enjoyed our 12 night cruise of the British Isles. The staff on the ship were great and service at the dining rooms was impecable. I was surprised to see sinks outside the buffet for washing hands instead of Purell stands but evidentally cruisers requested sinks. There WERE Purell stands at the dining rooms (not buffet that I saw). On that note, I didn't see many people ...
Read More

shackpacker
10+ Cruises • Age 70s
My husband's heritage is Scottish so this itinerary appealed to us. It is a bit port intensive so it is easy to get tired as some of the days could be quite long & many of the tours involved a lot of walking. But the ports were great, we had terrific tours (for the most part), & the scenery was beautiful. We learned a lot & met some terrific people. There were some downsides. The staff was not as ...
Read More

No more Princess cruises for us...

YoungCruiser92
6-10 Cruises • Age 30s
After 10 years since our last cruise, I booked a 12 night adventure with my elderly father. I am 26 and he is 78 with a walker/cane. Overall, we had a great trip and enjoyed our time together - we are not picky people. However, he mentioned several times while on the ship, and off, that he doesn't think he will sail with Princess again; and I agree. PROS: - Service: 95% of the service we ...
Read More

Hi YoungCruiser92, thank you for your feedback regarding your recent Caribbean Princess voyage. We will share your concerns regarding your dining experience with our team....

Findol
6-10 Cruises • Age 40s
We have sailed most of the major cruise lines and Princess was our favorite. We were married while on a Princess Alaskan cruise, and so we choose to sail the British Isles with Princess for our 10 year Anniversary. We were extremely excited, but we came back beyond disappointed with our experience. It was by far our worst vacation. If it hadn’t been for the independent tours we booked on our ...
Read More

Not all was bad, but enough.

steveg49
2-5 Cruises • Age 70s
We chose this because of the incredible itinerary. Every stop was a beautiful place in it's own right. The ship seems like it is having some problems mechanically. Several places around the ship you could smell sewage. The entertainment was okay, not all of it appealed to me. The buffet was very repetitious, and the biggest letdown for me was the menu in the dining room. Like a lot of people ...
Read More

BobTurriff
10+ Cruises • Age 70s
we have sailed many times, generally split between Princess, RCL, Holland America, Norweigian and Carnival.....mostly Princess and RCL...about 22 Cruises Last August we took the 12 day UK, cruise out of Southampton, to Ireland, Scotland, Orkney Islands, Guernsey Island and Le Havre. We noticed lack of Purell Hand Sanitizing stations, instead they had double sinks in the LIDO but nobody was ...
Read More

British Isles Cruise could not have been better

popidon
10+ Cruises • Age 80s
My wife & I ( Both of us 75 now) have used many other cruise lines in the past, including Princess ,However this trip was one of the best ever. Beginning with the prearranged flight ,transfer to the ship ,Boarding the ship was easy & efficient . On board experience was also convenient & all the staff was pleasant & very helpful to our requests .The stateroom with the balcony was delightful,& the ...
Read More

Hi popidon, thanks for the great feedback on your Caribbean Princess experience! We're so glad that you enjoyed our Princess Luxury Bed (we'd recommend visiting princessluxurybed.com to own...

Find a Caribbean Princess Cruise from $377