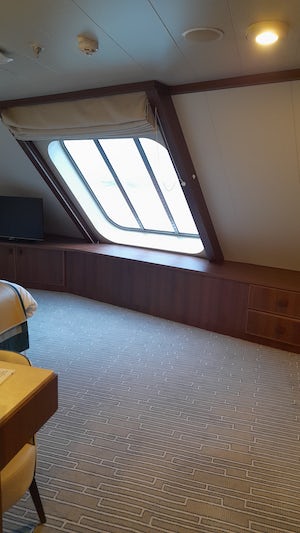 rouelle6
10+ Cruises • Age 60s
We have been on at least 6 other cruises with RCI, Celebrity and Seabourn and this was our first with P&O. We were extremely disappointed to say the least, even when compared to Island Cruises: the customer service both pre and during the cruise was absolutely disgraceful. Positives: Excellent service re baggage collection and delivery to the cabin and likewise on the return journey Cabin ...
Read More

Catfm
6-10 Cruises • Age 60s
This was our 6th cruise - 3rd with P&O. We booked for two reasons, it was our 25th Wedding Anniversary and the Ports of Call looked interesting. This was the largest ship we had been on, and like most other passengers we got lost lots of times! But it's makes for interesting discussion with others! We had an outside cabin on deck 12/A606 midship which was lovely. Bed was comfortable, room clean ...
Read More

Review for Ventura to Caribbean - Eastern

Portman Garry
6-10 Cruises
Having been on Ventura twice before I was looking forward to the cruise. I had had a balcony and inside cabins previously and chose an outside cabin for this cruise. The cabin was fine but the two pullman beds restricted movement and space was limited with nowhere to sit in the cabin other than on the bed or the one chair at the dressing table. The bathroom was adequate and the hanging space for ...
Read More

3rd and last time with P&O

globetrotter15
2-5 Cruises • Age 60s
Our last cruise was on the Azura last January 2014 going round the Caribbean which defiantly had the Wow Factor which we though ally enjoyed enough to book another cruise with P&O & despite the Ventura being the sister ship to the Azura it lacked any feel good factor. My wife enjoys sitting on deck during the day reading, whilst I usually go to any lectures, demonstrations & joining in the ...
Read More

meeann
First Time Cruiser • Age 50s
Having read some previous reviews, I was a bit nervous what to expect on our cruise, but decided to just go with the flow and make my own mind up. Well its been made up - Loved the cruise, the itinerary, the food and the other passengers. Our cabin was looked after brilliantly by Manuel, who would always greet us and asked how we were etc. We only had an inside cabin, but its a lot bigger than we ...
Read More

The Pro's Outweighed the Con's

Tregolwyn
2-5 Cruises • Age 60s
Have cruised with P&O once before (Oceana) and Ventura is certainly a more modern ship but, considering the size of the ship, the facilities are not much better. The library is very poor, shops not great, and standard of food not as good as we remembered. Like many people, I object to paying extra to eat in a "speciality" restaurant; all the food should be of an equal standard. I got tired of ...
Read More

Brilliant cruise, could not fault it

Review for Ventura to Italy

susan from chessington
First Time Cruiser • Age 50s
We were a group of 4 ladies celebrating our friend's 70'th birthday week on our first cruise. This cruise was brilliant, the ship was clean and well decorated, we had Freedom Dining which was great as we could eat where and when we wanted, we found the Saffron and Cinnamon restaurants and they were first class and our favourite.  We shared a table some nights and others were on our own, met some ...
Read More

EdinPhil
2-5 Cruises • Age 70s
Cruised on Ventura from Genoa stopping at Livorno, Naples, Dubrovnik, Venice then back again via Kotor, Corfu, Civitavecchia and Ajaccio (Corsica). An excellent itinerary which enabled us to visit a few “must-haves” and re-visit a few others as well as some we probably wouldn’t have gone to otherwise. First of all, Ventura is a large ship and it takes the best part of 2 weeks to find your way ...
Read More

Rough Crossing Between Dubrovnik and Venice, Night of 22nd September

Review for Ventura to Italy

manrow
2-5 Cruises
The basics of life on the Ventura were well organised by P and O. The essentials of cabin management, feeding and entertaining the passengers were all well organised. All facilities seemed to function well, in particular the warm clean swimming pools were much appreciated. General cleanliness around the vessel was impressive. Staff were enthusiastic and efficient in carrying out their ...
Read More

Mrsmoran69
First Time Cruiser • Age 50s
We've done several cruises but never flown before so this one was a first for us. Check in and transfer were very efficient, easy and the luggage appeared in the cabin shortly after lunch. I packed swimmers in the hand luggage so we could use the pool on arrival. Plenty of clean swimming towels are available in the Spa changing rooms. Evening meal service and menu were once again brilliant, with ...
Read More