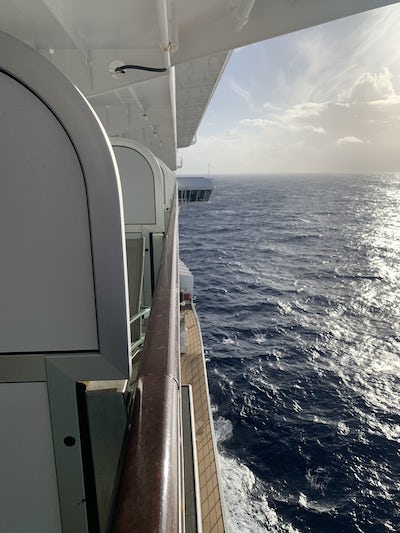 See all photos
Cruiser Rating
3.6
Average
31 reviews
Ratings by category
Featured Review
great value for money but long way out from towns docking
"Shops on board very high end expensive watch out for discount days item from 10 % /25% then marked down to 50% bit of a con The buffet was ok but when busy it was a bit of a bunfight very mediocre food curry rolls cheap sweets tea coffee, main restraints were ok small portions but blame a bit repetitive had lobster one evening so bad they offered me another and that was so dry as well but overall food adequate for mass catering the only big thing was that the ship was only half full great for food / shows etc really would not like to be on at full capacity would be very uncomfortable the other irritating thing was the entertainment team EXTREEMLY IRIITATING!!when playing any quizzes in brodies bar/ sail aways their ad libing became very annoying and seemed to have a very aloof attitude you just wanted to shut them up after 10 mins/ clap your hands and shout , it became like a butlins redcoat the maincrew were excellent very polite and attentive, the app worked fine on board but when full i would not like to say booking speciality restraints just not with it my opinion we went to the beach house it was bad had a full refund again overall very good but could well be different when at full capacity ps check in departure was seamless so quick on and off on departure..."Read More

TigerB
2-5 Cruises • Age 50s
Cruise B222 – Baltic & Scandinavia 18th September to 2nd October 2022 Accessible Cabin No. B709 (Deck 14) NB. This review primarily focuses on a review of an accessible cabin and other some other aspects of the cruise that are relevant to wheelchair users. If that doesn’t interest you then feel free to move on. If it does interest you then hopefully you will find it informative. ...
Read More

Our first cruise but won't be our last

Aud761
First Time Cruiser • Age 50s
This was our long awaited Baltic Cruise, postponed from 2020. We were very apprehensive about going after the number of negative comments I had read online about how standards had fallen and how lack of staff was affecting the service. I need not hav worried. Embarkation was smooth and well run. Once on the ship we were greeted with smiles and welcomes by staff wherever we went. Our cabin was ...
Read More

great value for money but long way out from towns docking

kevins review
2-5 Cruises • Age 60s
recentley returned from a baltic cruise great value for money but forced to use shuttle buses or book expensive trips copenhagen docks a long way from city forced to take hop on hop bus waiting at dockside £25 pp or shuttle bus to city £4 , not a lot there except little mermaid city very expensive stockholm docked in city but too far to walk, same for helsinki again too far to walk take ...
Read More

cjthedjeu
First Time Cruiser • Age 50s
Booked Select with Britannia, including coach transfers from Glasgow with Inter Cruises as a family of 4, kids are 13 & 10. Journey down was excellent, coach was comfortable but could have done with wifi. Had email to say we would be delayed getting on the ship so expected to be delayed but fortunately our coach driver just carried on and arrived at port on time and we got on ship just ...
Read More

Scotland Tigger
2-5 Cruises • Age 50s
I chose this cruise due to its itinerary and duration -Baltic states, unfortunately so did at least several thousand other folks on at least 4 other cruise ships in the same ports everyday (8 ships in St Petersburg) so be prepared this itinerary is VERY popular. Britannia herself looks spectacular in port, there’s no dioubting that, but she’s a little too big for my usual choice of ship but the ...
Read More

Where do the critical reviews come from?

Nalnacs
2-5 Cruises • Age 70s
Having cruised Iceland and the Med we wanted to see the Baltic states and St Petersburg in particular. We were slightly put off by many critical reviews of Britannia but remembered critical reviews of previous ships which we enjoyed. The balcony cabin was compact but well designed and well looked after by our steward. The food ranged from good to excellent and the waiters were friendly and ...
Read More

Jack and Jill
10+ Cruises • Age 70s
We had to unfortunately cancel our original cruise because of health problems so this Cruise was very much last minute for us as we like to book well ahead to get the cabin we want. We enjoyed the Baltic the last time we were there 8 years ago and thought it would be good to visit again. Having read several reviews earlier we were a little apprehensive but were pleasantly surprised. Britannia ...
Read More

Paul from the welly
2-5 Cruises • Age 60s
We chose this cruise this cruise because we liked the itinerary its was my 60th Birthday I have always wanted yo visit St Petersburg .The negative part of P&O Britannia was the bar staff I found some very homophobic bar staff which made very rude gestures to my partner in the bar that as karaoke .I was not told by my partner until we returned to the UK. He never told me because I would have been ...
Read More

tommytez
6-10 Cruises • Age 60s
This wa a Strictly themed cruise although the reason we chose this cruise was the destination ports being none we had visited before. We have embarked at Southampton several times before and this was the longest time for getting onto the ship, I suspect because this was the largest ship we have ever been on. From arriving in the port by car to being in our cabin took almost two hours with a lot ...
Read More

Great opportunity to visit a range of countries.

Mabel1959
First Time Cruiser • Age 60s
We chose this cruise in order to visit countries we may not otherwise have seen and especially to see St Petersburg. This was our first cruise and we enjoyed it. The ship was impressive with a range of places to eat and drink, well appointed cabins and courteous staff. We do not go in for the kind of entertainment on offer on cruises but enjoyed a couple of interesting talks and went to the ...
Read More