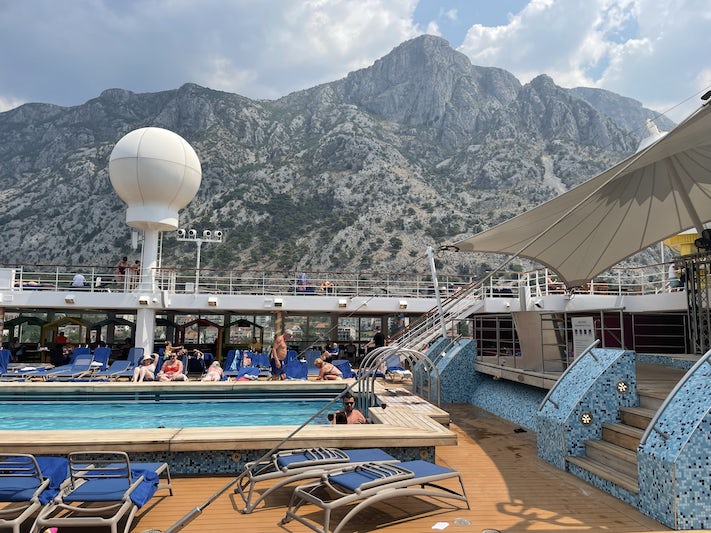 A budget cruise with great destinations, entertainment and crew

balloo_ka27
2-5 Cruises • Age 50s
The first thing to note is that whilst this ship is new to Marella it was built in 1994 and in places despite a refit is showing its age. You will need to travel on TUIs German Mein Schiff 1 & 2 if you want brand new ships! It is also a shame the all inclusive bit doesn't start when you step on the very old Boeing 757 plane but then i suppose prices would be higher. We booked a cabin with a ...
Read More

Stansfield
2-5 Cruises • Age 70s
This is only our fourth cruise and we wanted a cruise that visited interesting places in the Mediterranean and was only a short flight from home. Mornings and evenings were cool but temperatures in the day around the low 20 degrees C and we had one rainy morning. We flew from East Midlands to Palma and although check-in was slow arrangements went smoothly until check-in at the cruise terminal ...
Read More

DDownie81
2-5 Cruises • Age 40s
Booked under no illusion this would be like a Celebrity, Princess Cruise ect for the money paid, and that it was also an old shop which had been renovated rather than brand new. Overall impression public areas were clean and modern although there was a few snagging issues but this is to be expected and didn’t distract from our enjoyment while onboard. Food in the main dining room was really ...
Read More

Fronket
2-5 Cruises • Age 40s
We went on the 2nd sailing of Explorer 2. Collection at the airport went smoothly, we were given some information to read on the coach. The check in at the port was quick and easy. Was slightly disappointed that we were not given a map of the ship but there were screens and pictures around the ship that you could look to find your way around. The ship isn't perfect despite the recent refurb but ...
Read More

Less and less each time

flycgb
10+ Cruises • Age 80s
We have been with Mariella (Thomson) several times including Baltic capitals this last August on Discovery -which encouraged us to go again with this company. As we wanted to avoid the Bay of Biscay and have limited mobility, we opted to fly cruise via Majorca. We are less mobile than we used to be and assistance was booked but this seemed to exclude TUI staff. Help was needed with luggage not ...
Read More

Still some snagging but overall a good experience

Mjcopey
6-10 Cruises • Age 30s
We have sailed previously with Marella and overall been very happy with the product. Note... this is not a new ship. She is 25 years old and while she has been refurbished (some public areas are beautiful) there are some expected signs of the ships genuine age. Marella and TUI have been very upfront about the ships age, however some travel agents will say what they need to say to get the booking ...
Read More

Seasickofcruising
First Time Cruiser • Age 20s
At the time we booked the cruise because we thought we were going on a brand new luxury ship. Wrong. It is an old ship which has been refurbed once before. Some of the public rooms had had a make over and seeing them for the first time raised expectations about the cabins. But looking around you realised many of the carpets had not been replaced in the upgrading. Unfortunately the cabins were ...
Read More

I have to admit it did get better, a little better all the time...

Helpfultraveller2010
First Time Cruiser • Age 70s
Couldn’t get no worse!! First ever cruise and what a let down. We were on the inaugural cruise from 2 April 2019. In my opinion the ship was just not ready. Arrived on board before midday and cabins not ready. On an inaugural cruise?? However, advised to go to Pool Deck where food and drinks were available. That was fine but the toilets were blocked. No water for washing hands, toilet ...
Read More

dry land
2-5 Cruises • Age 60s
It was an anniversary cruise and we have sailed with TUI before and the Explorer 2 was supposed to have been refitted for this maiden voyage. We were given our cabin number at the airport and told our luggage would be taken straight to the ship, this however was not the case, we were then told by the TUI rep on arrival we would have to get our cases ourselves. (For us not a big problem ) . ...
Read More