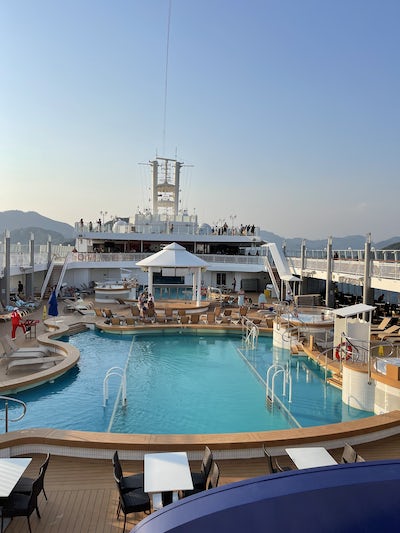 Our First Cruise...and We'd Do it Again!!

canary1959
First Time Cruiser • Age 70s
My son recommended this cruise, because he'd been sent the info by our local Travel Agent. So we went to see them. They were excellent in sorting out all the details. We cruised around the Caribbean from Jan 25th to Feb 6th 2017. This was our first Cruise so we booked the official NCL official shore excursions. We had an outside cabin with a picture window (the balcony cabins were too ...
Read More

Last cruise on NCL Jade before her refurbishing this spring.

jksail
6-10 Cruises • Age 70s
Love to get out of New Jersey in January-February. Our dream cruise would take us to sunny, warm waters all of February. NCL fits us so well as we really like the free style dining and generally casual atmosphere. The Grand Pacific was our favorite though we usually like the slightly less formal dining rooms on other NCL ships. Garden Cafe had the best food station layout of all the ships ...
Read More

Vbslm3327
10+ Cruises • Age 70s
just returned from 12 nights on the ncl jade... beautiful ship.. not to big, not to small, just right. we had a mini suite 11544 with plenty of storage space and nice size balcony.. I had a deck chair delivered and enjoyed the quiet time.. the only negative on cabin was 2 calls for toilet problems, which was corrected...we ate most meals in grand pacific and blue lagoon, which were all good.. was ...
Read More

5Stringer
10+ Cruises • Age 50s
We just returned from the 12 Day NCL Caribbean January25-Feb 6th cruise. After a dozen cruises on Celebrity, we found this itinerary and decided to give NCL a try. We have always chosen the longer itineraries and this one seemed perfect for us, and it gave me the chance to leave the suit at home and try Freestyle dining. Embarkation: Well, this wasn’t the best start of the cruise as we showed ...
Read More

Great ship that is ready for its update

blppep
10+ Cruises • Age 60s
We enjoyed our first cruise on the Jade. The crew was great and the concierge was the best I have ever encountered. He made 3 visits to the suite and greeted us daily. His name was O'mar. Specialty dinners in Cagneys were good. I wish they would have had more fish options but steaks were great. We ate breakfast here almost everyday. We enjoyed a meal in LaCucina and Tepanyaki. The show for ...
Read More

CaptainDMW
10+ Cruises • Age 60s
ANOTHER GREAT NCL JADE CRUISE Just returned home from the 12 night NCL Jade Caribbean cruise that departed from Tampa January 25. It was FANTASTIC!! This was our 8th NCL cruise - 2nd on the Jade. We picked this cruise, in part, because of the fantastic experience we had on the Jade on our 2014 Mediterranean cruise and that the same Hotel Director (Jovo) was HD on this cruise. He and the ...
Read More

Enjoyable cruise with a great itinerary and mostly good service

WriteRon
6-10 Cruises • Age 60s
This was our eighth cruise with NCL, several of which have been in the Caribbean. We chose this cruise because it offered a different itinerary than most available on NCL. We had already been to many of the usual ports that NCL stops at (at least once). Also, we had been on the Jade several years ago when it was still the Pride of Hawaii and thought it would be nice to revisit. We had never sailed ...
Read More

Keenan70
6-10 Cruises • Age 50s
We had a great time in all the ports on this cruise and liked the size of this ship and all the different dining options. The food was satisfactory, but the deserts were a little lacking except for Cagney's. The steaks and sides were excellent in this restaurant. Our food was never hot either with the exception of the specialty restaurants.  We learned to ask for our food extra hot in the ...
Read More

PurpleGriffon
First Time Cruiser • Age 60s
I chose this one as it had a bicycling island tour (Bike and Cruise was outstanding). There were several 'group dinners' at the speciality resturants, and my wife and I went to a couple fy ourselves. The French Bistro was by far the best we encountered. (And was with a group of 12 people). The service was outstanding. I was not drinking other than water - but drank a lot of that and it was ...
Read More

Paul and Robin
10+ Cruises • Age 60s
We like to take longer nights on a cruise so ten nights was just fantastic and a bonus our home port. We like NCL but will try any lines if going to the right places, this cruise went to all our favorite ports and the weather was perfect for January, The Jade we found was a very nice and clean ship with the crew very friendly and helpful. We had a balcony on deck 8 which we loved and found it a ...
Read More

Find a Norwegian Jade Cruise from $448