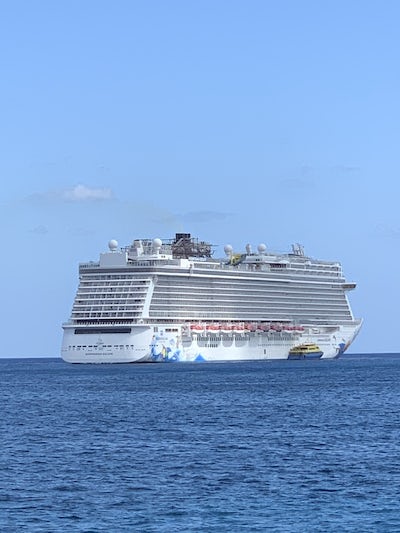 PeachesGomes
First Time Cruiser • Age 50s
Wow, don't know where to begin. First, because I've never cruised before, I thought the room would be small, no, no, no and no. The room had a queen size bed that looked and felted like a king size bed. I thought the bathroom was going to be small. No, no, and no again, the bedroom was average size with an amazing shower in it. The shower was equipped with a hand held shower head that was ...
Read More

noseatraffic
10+ Cruises • Age 40s
NCL made our vacation so enjoyable. We chose this ship specifically to vacation for the first time on a mega-ship, as frequent NCL cruisers. We wanted a ship that was current and not refurbished with an itinerary of at least seven days from USA. We were especially excited to experience The Haven, an area we previously could not afford on smaller Norwegian ships due to the price structure. This ...
Read More

Maschiele
2-5 Cruises • Age 50s
We cruised carnival 3 times before and had best experiences with staff, stewards, fellow passengers and crew. Wanted to try something different this time There was a total of ten in our party. None of us were very happy. The food was so gross mostly every night so no one ate. Even the dessert was tasteless. We couldn't get into any paying restaurant until 9:30 which is too late to eat dinner ...
Read More

KJCPALMER
6-10 Cruises • Age 50s
We love NCL and we wanted to try the beautiful new ship Escape! we had a wonderful time and enjoyed many family adventures on board such as water slides and pools and late night snacks... From a pleasant and speedy Embarkation through the final night celebration our trip was amazing! Our 8 year old enjoyed splash academy but our 17 year old was a bit "mature" for the teen club. He went to ...
Read More

bigredfins
10+ Cruises • Age 60s
Mainly price, just to get away...Some problems were mainly with other guests, hogging deck chairs, kids running wild..and one bad show"The Brat Pack"...Taste and Savor restaurant were good...in short it wasn't bad but nothing fantastic...getting off the ship was very poor with people putting their bags in front of the Q then off to breakfast, when they came back they just butted to the front of ...
Read More

Not one of our favorite trips

denrickp
6-10 Cruises • Age 40s
Love cruising with Norwegian. That said, expected more from them on the Escape. Having over 5,000 people on board we knew this was going to be an interesting trip. Lets start with how rude people can be. By day 3, I had made a comment that I was so tired of being the only one who was considerate enough to move to the side while walking down the hallways. I vowed to stop "making room" if the ...
Read More

strem066
2-5 Cruises • Age 30s
Don't get me wrong , you won't have a bad time if you choose this cruise. The food was very good, the staff was great and the ship was clean but it might not be for you if you are in your 20-30s even 40s. My biggest complaints relate to customer service prior to embarking the ship which was really poor. I also found the Norwegian website and policies very misleading and won't be traveling with ...
Read More

The Haven was our savior...

fieldsjm
2-5 Cruises • Age 30s
This was our fourth cruise with NCL and by far the worst. It is wasn't for being in the Haven and the service that affords, I would have given fewer stars. Most of our issues were related to the sheer amount of people on-board. The entire ship felt cramped, even our stateroom felt smaller (we did a similar cruise last year on the Getaway in the same cabin class). If you book this ship, I ...
Read More

Chriswill2
10+ Cruises • Age 50s
We usually sail Royal Caribbean, but we chose NCL for the perks they offered. Not worth it. We booked a suite, which was a tad bigger than an inside stateroom. The "broadway" theater is much too small for the number of passengers, so all the shows were "sold out". The one show we did manage to see was filled with vulgar language and strong sexual content. Not appropriate for families. The ship is ...
Read More

Best of the Best

mrbarter101
2-5 Cruises • Age 50s
First off, we chose the Norwegian Escape to the Eastern Caribbean because the other Norwegian one that we already booked on we had a conflict so we cancelled, so we booked this one rather last minute. We booked the end of July for an August 26th cruise. When we booked it, the price kept going down I guess to fill up the boat. Our cruise was totally full. To get on the ship, it took from ...
Read More

Find a Norwegian Escape Cruise from $429