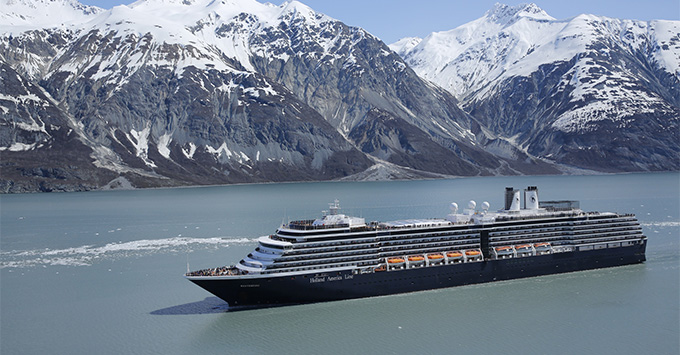 (4:30 p.m. EDT) -- Holland America Line has released its full Alaska lineup for 2019, including a new branding campaign. Dubbed "We Are Alaska", Holland America's 2019 Alaska cruise season will feature 133 departures and 15 different Land+Sea Journey cruisetour combinations to choose from in both Alaska and the Yukon.

The selection of the slogan "We Are Alaska" for the line's 2019 season signifies Holland America's long-standing presence in Alaska, where its fleet of midsize ships have operated for nearly 70 years.

New this season is the addition of three 21-day voyages aboard Maasdam. The 21-day "Ultimate Alaska & Pacific Northwest Adventurer EXC In-Depth Voyages" sailings depart from San Francisco on May 7 and 28 and June 18, 2019, and include 12 ports of call in Alaska and Canada. In addition to big-name sights like Hubbard Glacier, Ketchikan, Sitka, Haines and Juneau, Maasdam also visits out-of-the-way ports like Valdez, Kodiak and Wrangell, Alaska; and Port Alberni, British Columbia.

"'We Are Alaska' perfectly sums up our expertise, knowledge and robust cruise and land tour offerings and reinforces that anyone who wants the best trip to The Great Land and the Yukon should make Holland America Line their first choice," said Orlando Ashford, Holland America Line's president. "Holland America Line has been in Alaska for more than seven decades -- longer than Alaska has been a state -- and we're still the only cruise line going overland to the Yukon because of our experience; we know how to deliver it."

In addition to Maasdam's EXC voyages to Alaska, Holland America will feature a roster of seven- and 14-night itineraries aboard Amsterdam, Eurodam, Nieuw Amsterdam, Noordam, Oosterdam, Volendam and Westerdam. The sailings, between May and September 2019, will feature ports of embarkation in Vancouver, Seattle and Seward.

Guests embarking in Vancouver can choose between roundtrip voyages or one-way sailings between Vancouver and Seward that can be combined with Holland America's signature Land+Sea cruisetours that feature visits to Denali National Park or Canada's Yukon. Holland America offers six different Yukon+Denali itineraries and nine Denali options; cruisetours can be added pre-or-post voyage.

Holland America has also enhanced its offerings in Denali National Park with the addition of a new 99-guest hotel that features standard rooms and 54 junior suites, all with private balconies. The new addition is located just west of Denali Square, within sight of Mt. Healy and Denali National Park.

In Seattle, Eurodam and Oosterdam will sail convenient roundtrip Alaska voyages in 2019, with port calls on some of Alaska's most popular locales, plus a stop in the British Columbia capital of Victoria. Passengers sailing on Eurodam will enjoy scenic cruising through Glacier Bay, while Oosterdam guests will experience scenic cruising at Hubbard Glacier.