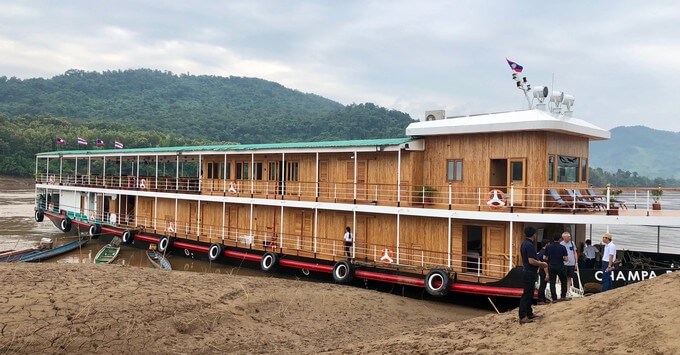 These are among the sights you'll see on an Upper Mekong river cruise through the southeast Asian country of Laos. We've just returned from a 10-night itinerary on Champa Pandaw, a 28-person vessel built and owned by Pandaw Cruises, the only cruise line that sails through this country. The trip gives you a chance to explore a culture completely different than your own, from the comfort of a well-designed river boat.

Here are seven reasons why you should put a river cruise through Laos on your bucket list.

There aren't words to describe the multiple shades of green that make up Laos' jungle foliage. As our boat pulled away from Chiang Sean, Thailand, we entered the Laotian highlands, where mountains rise on either side of the muddy Mekong. In the mornings, mist descends on the river, making your surroundings even more other-worldly. Caves in the limestone cliffs shelter bats, a food source for Laotians. In the lowlands, the boulders and sandbars that make the Mekong tricky for navigation turn into outright rapids, dangerous yet beautiful.

On most days, we walked through one or two villages to learn about local life; each one was slightly different as Laos has 49 ethnic groups. Curious children appeared at the riverbank as soon as the boat pulled up, following us around in a noisy entourage. Our guide Vieng introduced us to people in varying degrees of prosperity, from the Hmong tribe who create intricate needlework yet have no electricity or running water, to a mixed village where children tie a string to beetles to keep as pets, to the flourishing Laotian lowlanders who have access to better health care and secondary education.

Meeting grandmothers, carpenters, teachers and shopkeepers, and listening to their daily routine -- what they eat, where they go to work, how they go to school and worship -- gave us real insight into how Laotians live, and this is where Pandaw shines.

Remember those caves mentioned earlier? On our trip, we scrambled through Pak Ou, a cavern filled with hundreds of Buddha figures deposited by the faithful (the cave was also used as a hideout during the "secret war" of the 1960s and 1970s). One afternoon, we wandered through a butterfly garden, examining colorful specimens that were twice as large as anything you'd find in North America. A stop at the Kuang Si waterfall allowed us to beat the constant heat and humidity with a refreshing swim. 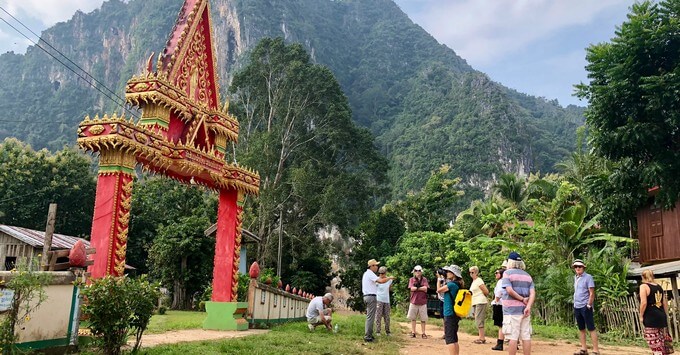 Preserved French Colonial architecture makes this vibrant city, the spiritual center of Laos with more than 30 temples, a highlight of the trip. Shopping abounds in the Night Market and other markets. Baby-faced novices in orange robes, some as young as 10, come into Luang Prabang from the surrounding countryside, and you can see them process in the mornings through the streets, collecting alms such as sticky rice from the faithful.

Those with hardy stomachs won't want to miss a walk through the morning market, where vendors sell food items ranging from delicate glass noodles (made from starch and water) and dragonfruit to barbecued frogs, live buffalo dung beetles and bamboo rats.

Don't worry, you won't be served insects or rodents on your river cruise. Laotian cuisine is as flavorful as its Thai neighbors', with a reliance on fish sauce and herbs such as lemongrass, coriander and red chilis (order your food mild if you can't take the heat). Sticky rice is a staple, eaten by Laotians at breakfast, lunch and dinner. The national dish is laab, a spicy preparation of minced meat which could be pork, chicken, beef or fish. While the chefs onboard prepare excellent variations for their guests, foodies will want to visit a local restaurant in Luang Prabang or Vientiane to get the true experience.

Weaving is an art practiced by most of Laos' ethnic groups, with variations among the patterns. Bring an extra suitcase for your scarves, wall hangings, placemat sets and accessories (our prized find: a hand-sewn jacket with an intricate Hmong-patterned border, bought directly from its maker in a village of 30 families). Other hand-made souvenirs include paper made from elephant dung and embossed with flowers and wooden carving boards. 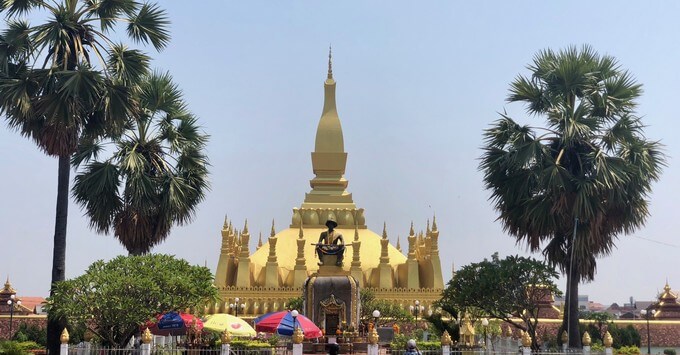 The Laotian capital lacks the overt charm of Luang Prabang, but a stop here is necessary to view Pha That Luang, a sacred Buddhist stupa (memorial) that appears on all of the country's money. It's said once you see its golden towers, you have been to Laos (and not until then). One must-see for Americans -- and others who want to see human rights work in action -- is a stop at COPE, a non-profit dedicated to helping victims of UXO (unexploded ordnance); Laos has more still-active bombs than any country in the world due to the Vietnam War. Round out your visit to Vientiane with Wat Sisaket, a temple filled with thousands of Buddha. Walk around the complex three times and you're lucky for life.