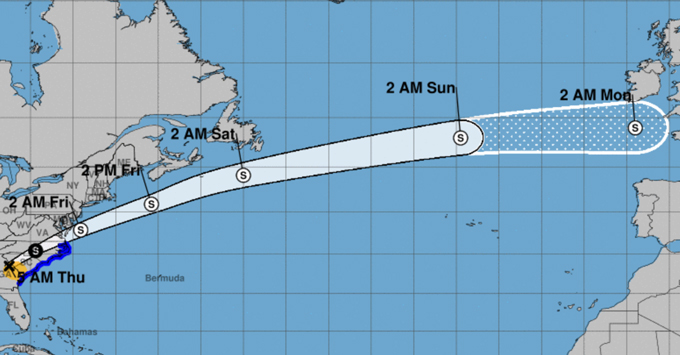 (Updated 5 a.m. EDT) -- Tropical Storm Michael -- a former Category 4 hurricane that touched down on Florida's coast with 155 mile-per-hour winds on Wednesday, October 10 -- continues to move through land -- so far rerouting at least seven cruise ships and delaying one.

Royal Caribbean also has been forced to delay Majesty of the Seas' return to Tampa on October 11; the ship now has an estimated arrival of 10 a.m. As of now, its next cruise departing on October 11 remains unchanged.

Cruises out of Florida might not be the only ones affected, however. On his Twitter account, Royal Caribbean's chief meteorologist James Van Fleet said the line might modify Grandeur of the Seas' departure out of Baltimore, so the ship would leave two hours early on October 11.

Carnival also is keeping a close eye on Charleston and Mobile, where Carnival Ecstasy and Carnival Fantasy, respectively, are due to depart for their next cruises on October 11. A Cruise Critic staffer onboard Ecstasy now has informed us the cruise is ending early, as the ship aims to return to Charleston at 1 a.m., several hours ahead of schedule. Carnival has set up a text alert system to keep tabs on the itineraries; cruisers should text CCL1 for Carnival Fantasy and CCL2 for Carnival Ecstasy to CRUISE (278473).

A tropical storm warning has been issued for Georgia and the Carolinas.

According to the National Hurricane Center (NHC): Life-threatening storm surge and catastrophic winds continue, as the eye of Michael approaches southeastern Alabama and southwest Georgia. The NHC added that while the hurricane is expected to weaken as it moves across the southeastern United States, it is forecast to restrengthen as it moves off the east coast.

Below is a breakdown of itinerary changes:

Norwegian Getaway: The ship, which departed from Miami on October 7, will now call at Falmouth, Jamaica, in lieu of Roatan, Honduras, on October 9 and Grand Cayman in lieu of Costa Maya on October 10; it is expected to visit Cozumel on October 12, as scheduled.

Carnival Triumph, which departed from New Orleans on October 8 for a five-day Caribbean cruise, will visit the same ports in reverse order, calling at Progreso on October 10 and Cozumel on October 11.

Carnival Glory, on a seven-night Caribbean cruise that departed from Miami on October 6, replaced its October 8 call at Grand Cayman with a sea day.

Carnival Freedom, on a weeklong Caribbean cruise that departed from Galveston on October 6, also spent October 8 at sea, instead of calling at Mahogany Bay as scheduled. The ship will visit Cozumel on October 9 and Belize on October 10.

Carnival Victory, on a four-night cruise that departed from Miami on October 8, has swapped two days -- spending a day at sea on October 9 and visiting Key West on October 11. The ship's October 10 call at Cozumel remains unchanged.

Carnival Miracle, which departed from Tampa on October 7, has canceled its October 9 call in Cozumel.

Carnival Paradise, on a five-day cruise that departed from Tampa on October 8, will visit Cozumel on October 10 and Grand Cayman on October 11.

Majesty of the Seas: The Tampa-based Royal Caribbean ship will depart for its next cruise on October 11 two hours early.