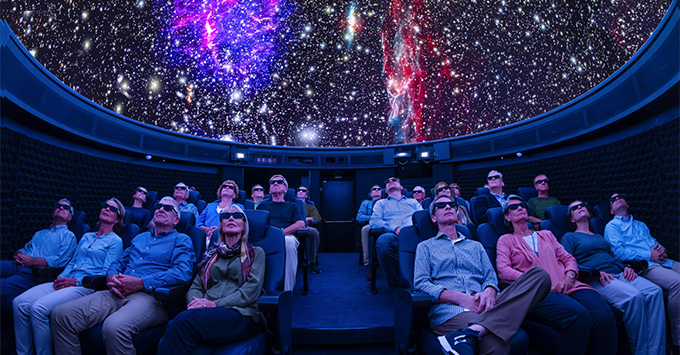 The Explorers' Dome, located on the second level of the ship's Explorers' Lounge, is a brilliantly high-tech planetarium that features a dome with 7K resolution, five laser-beam projectors, studio speakers and 2-D and 3-D options. While it's not the first cruise ship to offer a planetarium, it's the most advanced; Viking executives say Orion has the highest definition dome around.

No one person at Viking gets credit for the planetarium concept, which first emerged in September. The initial idea was to simply have a telescope, De Klijn said, but the line decided to go with the more ambitious project that combines a telescope with a full planetarium. It was one of the better-kept secrets in the cruise industry -- Viking didn't tell anyone it was coming ahead of its debut -- and passengers onboard our current inaugural sailing from Rome to Barcelona have been abuzz over the feature.

Passengers who sail Viking Orion will be treated to several shows a cruise, with two main programs Journey to Space (history of space travel) and Under the Arctic Sky (a look at the northern lights) offered several times throughout the cruise. Both feature stunning 3-D visuals, and all are complimentary.

Additionally, lectures will take place in the planetarium, led by the ship's resident astronomer. (Other ships in the Viking fleet include resident historians; Orion is the only one with the astronomer in addition to the historian.) The resident astronomer will lead two "iconic" lectures each cruise, with other programming determined in part by sky events and passenger preference.

Orion's telescope is movable but generally will be located on either side at the front of Deck 9. The astronomer will lead stargazing sessions, and the telescope can be hooked up to the planetarium so passengers can see the sights from their seats inside the dome.

Additionally, Viking has a partnership with Evans & Sutherland, a pioneering computer graphics company, which offers a full range of shows as well as an impressive database, which provides access to virtually live feeds from all over the world and beyond. For example, Orion could play a feed from the International Space Station, looking down toward Earth -- even zooming in to, say the Fincantieri shipyard, where Orion was built. In late fall, when the landing of the Mars lander InSight is scheduled, passengers might be treated to a feed from the mission.

Passengers can sign up for stargazing sessions or reserve one of the 26 seats in the planetarium via the ship's Viking Voyager app, and Viking executives are confident they can accommodate the demand. Viking made one point clear in discussing whether the Explorers' Dome will be added to more Viking Ocean ships: Passenger reception is will be a key factor in making the decision. 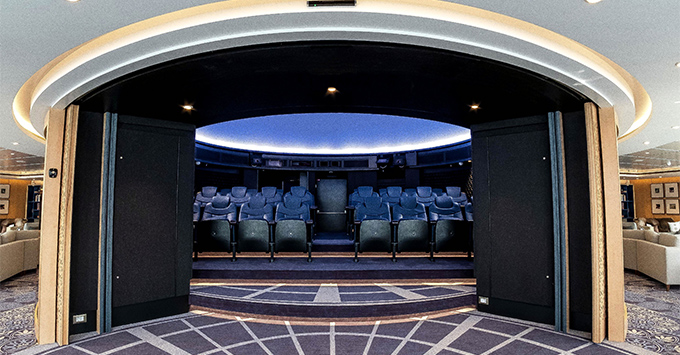 "I'd be delighted if what we do is used elsewhere," Howard Parkin, the ship's current resident astronomer said, adding that part of the appeal of a planetarium on Viking Orion is the cruise line's close ties to the Viking heritage. Astronomy is linked to nautical navigation and exploration, Parkin said.

In fact, exploration is a pillar of the Viking cruise experience, and has been especially so on Orion, especially since astronaut Anna Fisher was named godmother to the ship last fall. The new ship boasts art of space exploration, alongside a display detailing Viking history. It also dovetails with Viking's destination-focused itineraries and immersive enrichment onboard and ashore.

Viking Ocean Cruises offers a mostly inclusive product, with fares that include wine, beer and soft drinks at lunch and dinner, open specialty dining and a thermal suite that is packed with features to allow a full Nordic spa experience. Its first ship, Viking Star, debuted in 2015, and the line has plans to build at least 16 new cruise ships. All ships accommodate 930 passengers.

Viking's five ships are nearly the same down to fabric and furniture details, so the dome does stand out. It's located in the ship's gorgeous and popular Explorers' Lounge, a two-deck space for drinks, relaxation, conversation and reading. De Klijn said the team worried that putting a dome into the middle of the lounge's second deck would take away from the experience, but he says they "didn't lose one chair." It does cut into the space that is open on other ships, but it doesn't disrupt; soundproofing tests were conducted to ensure noise wouldn't leak out.

Viking Founder and Chairman Torstein Hagen insists that all five ships are identical, even calling the new planetarium an art installation. "I view it more as an additional piece of art," he said.

But this much is undeniable: This planetarium makes Orion stand out from the other ships in the fleet. And while Hagen is probably right in saying a planetarium alone isn't reason enough for passengers to book a ship, it is absolutely an inducement for travelers to pick Orion, especially those who enjoy learning about exploring the world -- by sea and by the heavens.