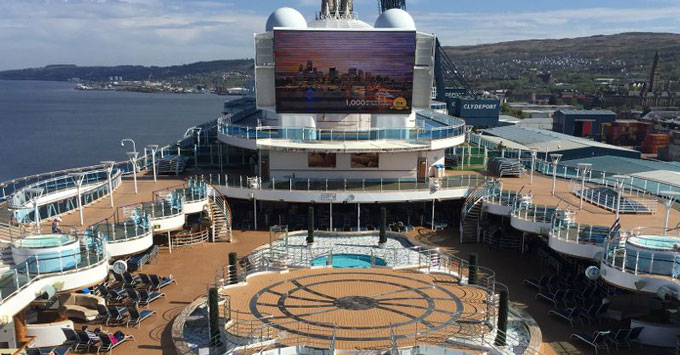 Princess Cruises' flagship Royal Princess is back in in the U.K. for the first time in two years and we've just returned from spending five days onboard. It was Princess Cruises' first British Isles cruise of 2018 and we joined for the middle section of a 12-day roundtrip voyage from Southampton, sailing from Dublin to Edinburgh and stopping at ports in Northern Ireland and Scotland in-between.

Royal Princess' original claim to fame is that the ship's godmother is none other than HRH the Duchess of Cambridge, but the ship recently become a star in its own right. ITV filmed fly-on-the-wall documentary series "The Cruise" on board Royal. The Cruise demonstrates what life's like on a cruise ship for both crew and guests and has been such a hit with viewers that its fifth series has just aired and and a sixth has just been confirmed.

Since the ship was christened in Southampton in June, 2013, this 3,600 passenger ship has sailed round the Med and in the Caribbean and has now come back to where she began. Read on for our hits, our misses and where we’re reserving judgement because not everything was available to test during our time sailing.

The most important thing about any holiday is sleep…preferably lots of it! As a sometime insomniac (especially on the first night somewhere new) our first night at sea isn't always the best, but on Royal we fell asleep instantly and didn't wake up till eight hours later, as was the case on subsequent nights. Better still, every evening after turn-down we found two chocolates on the pillow. So many other cruise lines have cut back on this little extra, but we think it's a lovely touch and fitting for a ship of Royal's pedigree.

In each port we were wowed by history, lush landscapes and dramatic coastlines. A guided tour round Dublin finished with a pub visit (of course!) and our first Guinness and Irish coffee. In Scotland we hiked coastal trails and visited Loch Ness. And whilst exploring the ruins of Urquhart Castle on the loch's banks we swore we saw a monster-like shape in the dark waters! But it was Northern Ireland's Antrim coast near Belfast which stole our hearts. It's home to white-sand beaches, historical castles and the 60 million years old Giant's Causeway, a UNESCO World Heritage Site which comprises of 40,000 hexagonal basalt columns sticking out of the sea. (Fun fact: Many of these spots feature in current hit TV drama "Game of Thrones".)

Locals entertained us on the ship as well as off it. Late afternoon in Scottish ports saw natives performing indigenous songs, dances and pageantry to a packed Royal theatre. And twice we enjoyed kilted bagpipe bands marching quayside at sail-a-way. Passengers rushed to balconies to watch and the roar of appreciation when the music finished was deafening. Our highlight, however, was a Celtic Irish Dance class in the atrium. Not quite Michael Flatley from Riverdance standard, but we still mastered some heart-pumping leg-flicks.

4. Movies Under the Stars

Much more relaxing was Royal's poolside screen, the biggest in the Princess fleet. Several times (yes, the UK weather was good enough) we chilled by the pool watching Cirque de Soleil, pop concerts and some excellent new movies. Better still, these movies can be watched in cabins for free. You can resume where you left off and during our short voyage we enjoyed (in several instalments) The Greatest Showman, Victoria and Abdul and The Darkest Hour, all which we'd been upset to recently miss in cinemas. 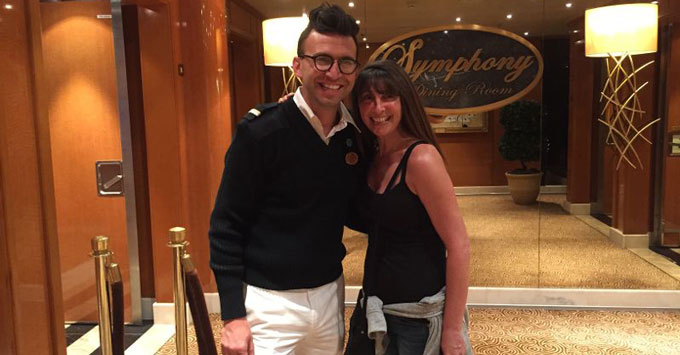 We're big fans of ITV's "The Cruise" and are familiar with its cast. And so it was that one morning we were heading towards Royal's theatre when we saw someone in uniform that made us do a double take. It was Timothy from Shore Excursions (one of our favourite characters from the show) and he happily allowed us to take selfies with him -- as lovely in real life as he is on screen!

From the mouth-watering filet mignon we devoured in speciality restaurant Crown Grill to the Asian-spiced duck breast in the main Symphony dining-room, Royal Princess' food is top notch. Special mention must be made, however, of the International Café in the atrium on Deck 5. It offers a tasty selection of quiches and salads (all free) which make it a great alternative to eating in Horizon Court. And the cappuccinos are the best we've ever tasted, although be aware that speciality coffees cost extra.

We love walking laps around a promenade deck to burn off excess calorie consumption, but alas, Royal doesn’t have one and the combined walking and jogging track on Deck 17 isn't a satisfactory substitute. Doing repeat circuits around it feels like walking in small circles. Dull.

The drawback of modern ships -- tiny balconies. Our double cabin had a balcony and whilst there was room for two chairs and a small table, it was a squeeze and we'd like to see more space both to manoeuvre ourselves and to accommodate a yoga mat for morning (or evening) sun salutations.

New and only on Royal Princess is the musical "The Secret Silk", written exclusively for Princess by Grammy, Oscar and Tony Award-winning composer Stephen Schwartz. Because it's such a busy, no expense spared show -- pyrotechnics, puppetry and lavish costumes all feature -- it’s only performed once a cruise and sadly we missed it. Stage Manager Breanne did allow us backstage, however, for a sneak peek of one of the puppets, designed by Jim Henson's studio. Its sheer scale was impressive -- more War Horse than Muppets. According to Breanne the show's a massive crowd-pleaser, with guests lining up outside the theatre door thirty minutes before curtains, hoping to grab one of the theatre’s 926 seats. Fingers crossed we see it next time.