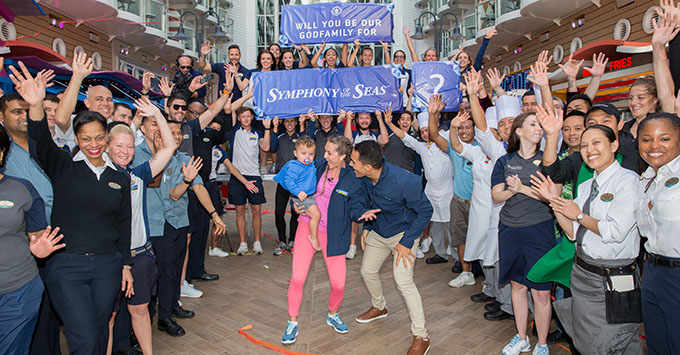 (10:25 a.m. EDT) -- For the first time a cruise line has chosen a family to preside over the naming of a new ship. Royal Caribbean selected TV actors -- and self-proclaimed Royal Caribbean cruisers -- Carlos and Alexa PenaVega, and their 17-month old son, as godfamily for its newest cruise ship, Symphony of the Seas.

"Carlos and Alexa have been an extension of our family for quite some time n ow, and they truly personify our spirit of innovation and adventure in every way," said Michael Bayley, president and CEO of Royal Caribbean International. "We're very excited to welcome them and their son Ocean as the first-ever godfamily to officially name a ship. Their passion for cruising and commitment to family make them the perfect choice to serve as the guiding spirits for Symphony of the Seas."

The couple are avid Royal Caribbean cruisers, particularly when it comes to the Oasis Class ships. They got engaged on Oasis of the Seas and spent their babymoon on Allure of the Seas.

While an unusual move for a cruise line, the selection of a family to act as godparent for the ship is not entirely surprising as Royal Caribbean touts Symphony of the Seas as the greatest family cruise ship ever built. It has several family-friendly attractions including a traditional Boardwalk arcade, laser tag and ice skating, the heart-pounding Ultimate Abyss slide, FlowRider surf simulators and the one-of-a-kind Ultimate Family Suite.

Royal Caribbean asked the family while they were onboard Harmony of the Seas filming the Hallmark Channel's "Love at Sea," which stars the couple.

Symphony of the Seas is now sailing Mediterranean cruises out of Barcelona. It will reposition to Miami in early November, where it will be named that same month.