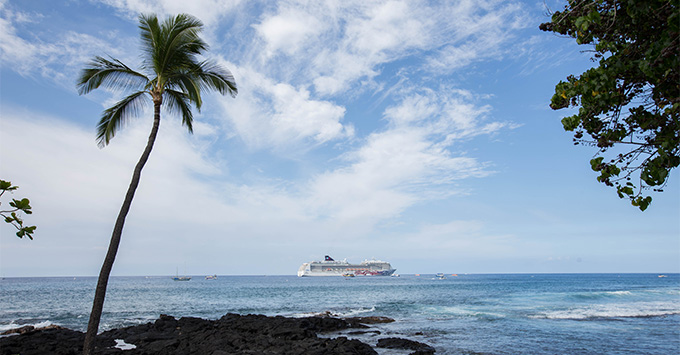 (Updated 7:55 a.m. EDT) -- At least five cruise lines have altered itineraries in recent weeks as a result of the ongoing Kilauea volcano eruption on the Big Island.

Norwegian Cruise Line has suspended calls from Pride of America indefintely. Luigi Razeto, senior vice president of marine operations for the company, has made a statement saying, "Please be informed that due to the uncertainties associated with the ongoing volcano activity on the Big Island, it has been decided to take Hilo and Kailua-Kona … out of the POA itinerary until the situation is back to normal." The cruise line cites concerns over air quality as the primary reason for the cancellation.

Norwegian's Pride of America, which sails Hawaii itineraries year-round, had been forced to skip Hilo multiple times before announcing the cancellation. Norwegian's Hawaii-based ship, Pride of America, replaced its Hilo stop on Tuesday, May 15 with a day at sea. On May 16, in lieu of calling at Kona, the ship returned to Maui, where it had already spent the day on May 13.The ship called at Kona on May 30, as planned. Sea Princess skipped a scheduled port of call to Hilo on May 18, while Royal Caribbean's Radiance of the Seas also canceled its visit to Hilo, in the immediate wake of the volcano's most recent activity.

Among other lines affected are Crystal Cruises and Oceania Cruises. Oceania has replaced Insignia's June 6 call at Hilo with an overnight in Honolulu.

Both Hilo and Kailua Kona are located on the Big Island. Hilo, in particular, has been subjected to greater levels of vog (volcanic smog), which has been affecting the air quality throughout the southern part of the island.

According to a Princess statement, "[Kona] remains open to ship traffic and is operating normally." It added: "Guests will have no disruption to shore excursions in Kona, but those with independent arrangements may find some areas of the island inaccessible. Princess advises all guests to heed all warnings from local authorities and stay out of any restricted areas."

Hilo is the largest city on Hawaii's Big Island. Volcanoes National Park, which is located some 45 minutes away from Hilo and is one of the biggest attractions on the island for cruisers, had been closed since a 6.9-magnitude earthquake hit on Friday, May 4. However, parts of the park have reopened.

Kilauea volcano erupted on Thursday, May 3, spewing lava hundreds of feet into the air. Since then, more than 20 fissures have opened in nearby communities leaking even more molten lava. The U.S. Geological Survey said, as of May 31: "Vigorous eruption of lava continues from the lower East Rift Zone (LERZ) fissure system in the area of Leilani Estates and Lanipuna Gardens." It added that volcanic gas emissions remain high, and trade wind conditions are bringing vog (volcanic smog) to the south and west sides of the island.