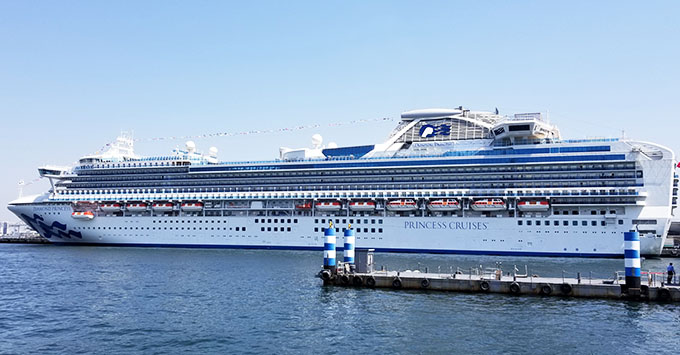 We're on a 12-night voyage aboard the 2,670-passenger Diamond Princess, circling Japan's main island of Honshu, with an additional side-trip to Busan, South Korea. Diamond Princess is homeported in Yokohama, Japan, and has a unique blend of Japanese and traditional Princess Cruises offerings. Here are some of our first impressions about this unusual itinerary and the hybrid onboard experience.

We Are the World

While the typical Princess ship is predominately filled with North American cruisers, Diamond Princess routinely carries a polyglot passenger list. On the cruise prior to ours, there were 42 nationalities represented; currently, there are more than 20. On average, 60% of the passengers are Japanese, but there's also usually a good representation of Australians, British, Americans and Canadians. That mix changes a bit, though, depending on the length of the voyage (see below). Signage, announcements, daily bulletins, enrichment, karaoke soundtracks, and even the cruise directors come in both English and Japanese versions.

We've been delighted by all the enrichment opportunities onboard, which offer a fascinating taste of Japanese culture. We have tried on a yukata (the summer version of a kimono), with the help of volunteer Japanese passengers, who yanked and pulled on the complex ties and obi sash until everything was perfect for a fun photo op. On different occasions we learned Japanese festival dances, made an origami box and practiced writing our name in Japanese characters -- again with the help of passenger volunteers. We picked up some amazing package-wrapping techniques and practiced useful Japanese phrases at other sessions. One added pleasure at most classes is the chance to engage with Japanese passengers, who show up to both learn and help.

At the package-wrapping class, we partnered with a Japanese passenger to practice using a furoshiki (decorated wrapping cloth) to bundle up packages and wine bottles. Although we knew only a few words of each other's language, we had a great time of it. When the class was finished, our new tomodachi-san (friend) gave us an adorable pin with two petite geta (traditional Japanese sandals) on it, made by her granddaughter. Japan is a shoppers' paradise, but this will definitely be our favorite souvenir.

The onboard dining offerings are different on Diamond Princess, too. Portion sizes are a bit smaller, to accommodate Japanese tastes. There are also opportunities to sample Japanese foods, including a design-your-own ramen bar and a make-your-own-sushi-roll station at the buffet restaurant, as well as miso soup, tofu menu items and other Japanese-influenced dishes. Feeling adventurous? You can order a Japanese breakfast of fish, rice, soup and pickles at the International dining room. Specialty-dining restaurant Kai Sushi is unique to this ship, with Japanese sushi chefs turning out maki, nigiri and sashimi. Cabins are fitted with electric teapots, green tea bags and Japanese teacups -- amenities not found on the rest of the fleet. Robes are also provided in every cabin on Diamond Princess. But, sorry, if you want a high-tech Japanese toilet, you'll have to upgrade to a mini-suite. 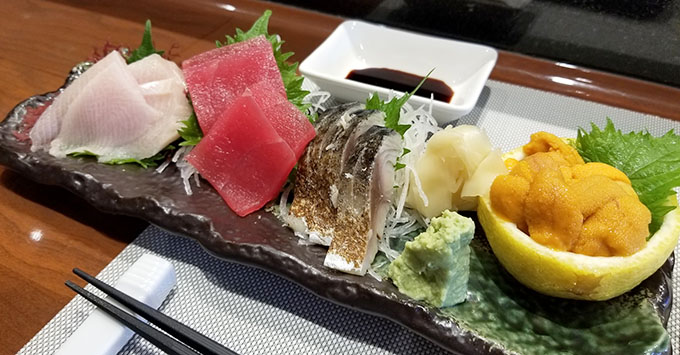 You're Soaking in It

Another option not available on any other Princess ship is Izumi, the Japanese bath facility. For an extra fee, you can have an authentic experience, soaking nude (but separated by sex) in a series of large communal tubs, both indoors and outdoors -- all with gorgeous sea views. Just be sure to scrub down thoroughly at the traditional-style washing-stations prior to entering the tubs. Staff offer tours and can help explain the process. There's also a separate outdoor tub where men and woman can mingle, but swim suits are required.

In addition to offering Japanese cultural opportunities, the ship is also big on crossover activities. Karaoke sessions are wildly popular, with both Japanese and non-Japanese -- though some Japanese crooners seem nearly professional. Country-music nights are a huge hit with Japanese line-dancers. Who knew? Many Japanese are fond of ballroom dancing, too, so there are more scheduled opportunities to glide around the dance floor. At lunchtime, the line to sample all-American burgers at the Trident Grill is 20-deep. Japanese travelers have a fondness for Hawaii, so a pair of Hawaiian entertainers is onboard; they also give hula and ukulele lessons attended by an international mix of passengers.

Even if you've been to Japan several times (as we have) Diamond Princess' itineraries will likely include some destinations you've never visited. We called on Hakodate, on Japan's northernmost main island of Hokkaido. We docked in Aomori, on the north of Honshu, just in time for peak cherry blossom season; we toured museums there housing humongous festival floats and munched giant local apples. We tried our hand at cooking bulgogi during a shore excursion in Busan, and bought a bunch of fabled Korean beauty products at bargain prices. At Sakaiminato, we visited the Adachi museum, housing art by some of Japan's most renowned painters and marveled at the museum's traditional garden. We wandered a geisha quarter in Kanazawa and ate an ice cream cone decorated with the town's famous gold leaf. We've bought ceramics and pear liqueur and second-hand kimonos. We will probably have to buy another suitcase, too. 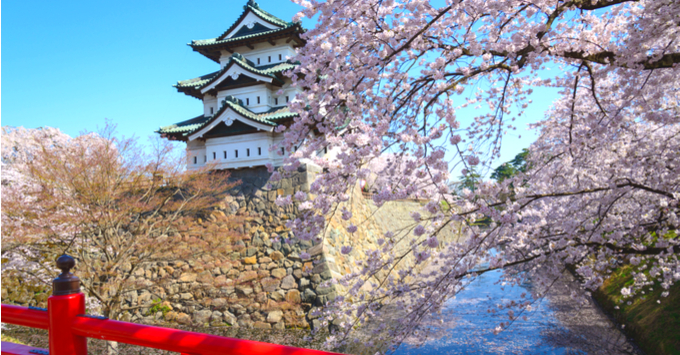 The Long and Short of It

Our cruise is actually a double -- combining back-to-back 8-night and 4-night itineraries. We had a big passenger turnover yesterday, as many people disembarked from the 8-night cruise and those doing only the 4-nighter boarded. There are now 2,500 Japanese passengers and some of the dining rooms have been converted to Japanese-only, leaving several non-Japanese passengers we've spoken with miffed at being displaced. While there were sea-day Japanese language lessons on the longer leg, now there are English lessons. Much as anybody would on a short sampler cruise, the new passengers seem determined to take advantage of every activity and food offering, so venues tend to be mobbed. The Japanese passengers are endlessly polite and crew seem to be taking it all in stride -- but non-Japanese passengers may want to focus on the longer Diamond Princess itineraries where they'll be in a more eclectic mix of nationalities.