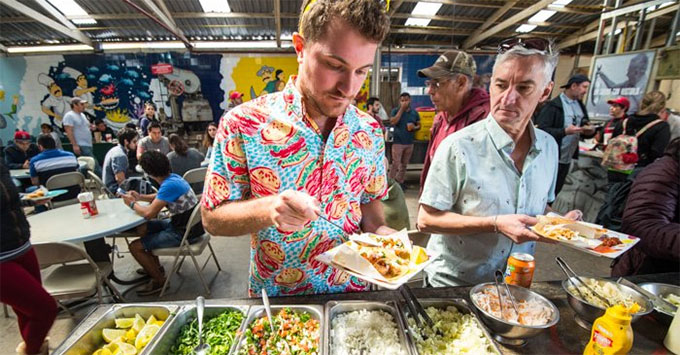 Destination immersion is the hot buzz phrase in the cruise industry these days -- bringing ports of call more into focus, giving cruisers a sense of place that goes beyond an onboard experience that could be anywhere.  Cruise lines large and small are approaching this concept in varying ways, and Princess Cruises introduced some of its new initiatives during a just-finished culinary cruise along the Pacific Coast aboard Ruby Princess.

The chief focus was a new shore excursion partnership with Bon Appetit magazine announced earlier this month.  More than 30 of these shore excursions will be rolled out around the world.  For our four-night sailing we had just two ports of call, but we were able to test drive the new Mexico tour, developed by author Bill Esparza, a James Beard Award-winner for his coverage of L.A.'s taco scene. A secondary focus was on Princess' own in-house culinary shore excursion tours; the one in Santa Barbara was also developed in partnership with chef Esparza.

Here's a look at our experience with the two tours.

The Ensenada shore excursion is curated by Bon Appetit with Esparza -- it's an exclusive to Princess Cruises.  Five stops around the city are designed to showcase the cosmopolitan port's surprising food and wine scene.  There were mussels and wine in the garden setting of chic Boules, and we enjoyed the taco del dia and a Tiger Special (a twist on the gin and tonic) at one of Ensenada's premiere restaurants Manzanilla, hosted by the well-known chef--couple owners, Benito and Solange.

But equally popular were the street tacos found at Marco Antonio, a bustling establishment occupying the remains of an old seafood canning facility -- a rustic warehouse where the freshly pressed tortillas roll onto the grill and are quickly filled with tuna or salmon in a variety of preparations.

A highlight for most was the pilgrimage to La Guerrerense, the unassuming little street cart operated by Sabina Bandera, celebrated by chefs and foodies on both sides of the border ranging from Rick Bayless to Anthony Bourdain.  Sabina's seafood tostadas -- crab salad with smoked oysters, sea snail ceviche, fish pate with scallops -- put this lady on the map and helped her build a larger restaurant across the street.

Princess' Santa Barbara tour (not affiliated with Bon Appetit), began with a jolt of caffeine at Handlebar Coffee Roasters. The "California's Riviera, Food and Wine" tour then went on to two architectural stops at the beautiful Mission Santa Barbara, founded in 1782, and at the Santa Barbara Courthouse, one of America's most photographed public buildings.

And then it was off for lunch at chef Ramon Velasquez's Corazon Cocina, housed inside the Santa Barbara Public Market.  Formerly known for a Tijuana food truck, Velasquez has transported his street food into a polished warehouse setting, offering such delectable items as queso fundido -- melted cheese, mushrooms and roasted poblano chili -- and tempura cauliflower tacos with dates, radish and micro greens.

The tour then headed over the scenic coastal mountains into the Santa Ynez Valley, 45 minutes away, where we visited the sweet town of Los Olivos -- famous as a setting for the classic movie "Sideways" -- where Saarloos and Sons winery has introduced wine tastings paired with cupcakes.  The quirky concept is better than it sounds, and the family-owned winery is the only place to purchase these lovingly crafted bottles.

As Princess' first culinary cruise along the Pacific Coast, the cruise line kept food buffs satiated with additional activities aboard.  These included celebrity guests, such as Carlos Salgado (renowned for his acclaimed Costa Mesa venue Taco Maria), Bill Esparza, and Sabina Bandera, who did cooking demos, Q&A's, and tequila tastings onboard.

Salgado's recipe for scallops in aguachili -- a cousin to ceviche -- was not only showcased during the demo but will be a standing amuse bouche served at Crown Grill on Mexico itineraries.  And Esparza left behind recipes for michelada verde (Corona beer with chili and fruit juices) and pozole blanco (hominy corn in pork broth), both among the Mexican dishes that will be served at the pool bar and Horizon Court buffet on future cruises along the Pacific Coast.

Princess promises future culinary cruises, at destinations to be announced.