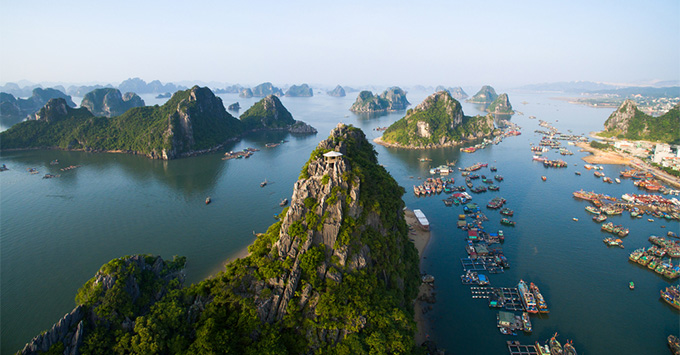 (11:40 a.m. EST) -- If you haven't heard of the Red River, which starts in China and flows through northern Vietnam connecting the capital of Hanoi to Halong Bay, you're not the only one.

But in 2015, Pandaw -- an expedition river cruise line that specializes in Southeast Asia -- was looking for an alternative to the increasingly crowded and competitive Mekong. It moved one of its shallow-draft vessels, the 32-passenger Angkor Pandaw, and launched the only commercial cruise along the major waterway that's considered to be the cradle of civilization in Vietnam.

Our 10-night downstream cruise began in Viet Tri, a provincial capital about 50 miles northwest of Hanoi. This low-water itinerary, in effect December through March, included visits (all by bus) to several small towns before arriving in Hanoi, an urban centerpoint for an overall itinerary that facilitates unscripted cultural encounters.

We spent our first night in Viet Tri tied up in front of a Buddhist temple, accompanied by traditional music, altars piled high with fruit and flowers, and a trance-like ceremony honoring the goddess of rivers. As impromptu interlopers, we were greeted by the local celebrants with broad smiles and choruses of xin cháo (hello in Vietnamese) -- and, in a gesture of good will and good fortune for the coming year, a shower of local currency from an elaborately costumed incarnation of the goddess herself. 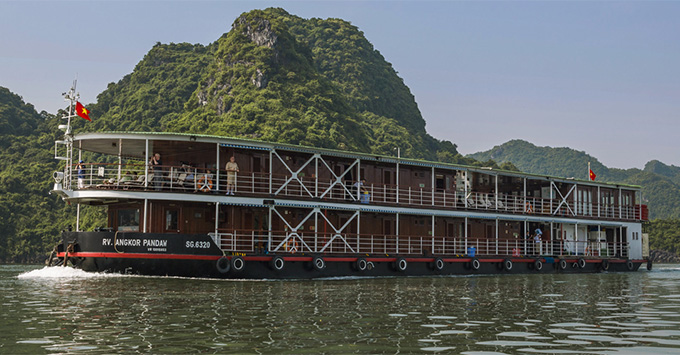 On this voyage, as on most Pandaw trips, nearly half the travelers (at 24 cruisers the ship is not crowded) are repeat passengers -- from Australia, Britain and Canada as well at the U.S. (One particularly avid fan, with the irresistible name of Jane Wanderer, has already been on six Pandaw voyages and is bringing five friends along for the Red River ride.)

Many elements of our current Pandaw experience are proving familiar to those old hands, from the 16-cabin ship itself (a handsome, wood-paneled replica of a colonial-style vessel built in 1865) to the food (a combination of buffets and three-course lunches and dinners, with a strong emphasis on locally sourced ingredients and menu items).

On-board attire is refreshingly casual; "dressing for dinner" in the sit-where-you-please dining room is as likely to include T-shirts and hiking sandals as dresses and loafers.

With the exception of a day touring Hanoi, excursions led by our two ship-based Vietnamese guides have concentrated on small town experiences. One of the most memorable: a game in which six-passenger teams were each given 20,000 Vietnamese dong (just under $1 U.S.) and set loose in a morning market in the traditional village of Duang Lam. Armed with an orally delivered list of five fruits and vegetables, we were tasked with finding and paying for the items in our fractured Vietnamese, with the team who brought back the right goods -- and the most change -- winning a bottle of wine for the next meal.

Meanwhile, Angkor Pandaw's crew of 18, who hail from Vietnam and Cambodia, have greeted our every return to the ship with a cool towel, a cold glass of juice and a warm "welcome home!"

But although our downstream route will wind up in Halong Bay, a UNESCO-designated, cliff-studded labyrinth of islands that's considered one of the most gorgeous spots in Asia, the vistas at the start of our trip have been decidedly less picturesque.

During this low-water season in northern Vietnam, even Angkor Pandaw's three-foot draft is too deep to tackle some of the smaller Red River tributaries featured on the ship's April - November itinerary.

Our first night aboard, a planned sunset excursion on the Lo River upstream from Viet Tri had to be scrapped because of particularly paltry water levels, and since then our views have included piles of shoreline trash and a parade of industrial barges loaded to their gunwales with sand collected from the river.

But there have been scenic surprises, too, from radiant green shoots in newly planted rice fields (viewed from our tour bus window, rather than the ship) to a prism of flashing lights on Hanoi's recently completed Nhat Tan Bridge, where we anchored one night. 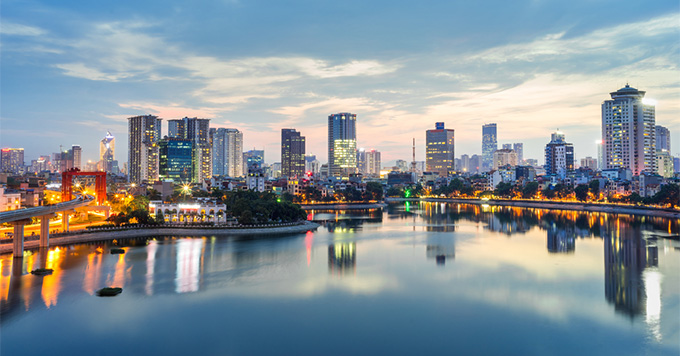 Connecting the capital to its glitzy international airport, the bridge's five spans symbolize Hanoi's five ancient gates - and the country's passage from a turbulent past to a promising future.

That past has been on the minds of our band of passengers. Half of us are Americans, all old enough to remember what some locals still call the "American War" vividly.

Fifty years ago this winter, North Vietnam launched a series of surprise attacks against South Vietnam that coincided with the New Year celebrations known as Tet.

Though the conflict would drag on for another seven years and kill tens of thousands more, the Tet Offensive proved to be a turning point in U.S. public opinion.

Tet was in full swing when we started our journey. Streets were filled with flower vendors, rafters were strung with red paper lanterns and locals dressed to the nines were making pilgrimages to temples -- including our first stop in Viet Tri. The welcome smiles we received there have proven to be typical -- and given us not only a different perspective on Tet, but on the war that still keeps a grip on the psyche of an entire American generation.