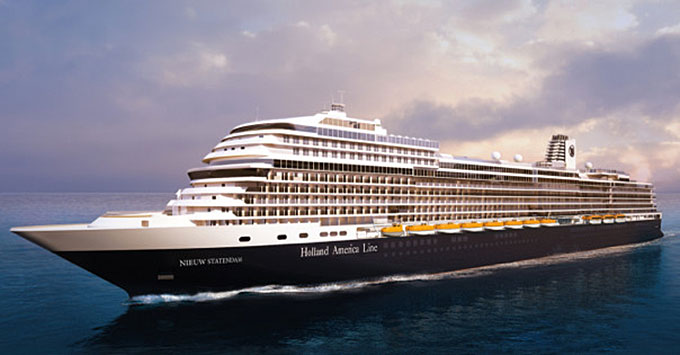 (4:20 p.m. EST) -- Holland America's Nieuw Statendam -- slated to be delivered in December 2018 -- will offer Europe cruises from May to late October 2019, following its inaugural season in the Caribbean.

The second ship in Holland America Line's Pinnacle Class, Nieuw Statendam will be a twin sister to Koningsdam, which debuted in April 2016. It will kick off sailing from Fort Lauderdale on three- and four-night Bahamas cruises, seven-night Eastern or Western Caribbean cruises and a 10-night Southern Caribbean itinerary.

A transatlantic crossing in April 2019 will bring the ship from Fort Lauderdale (Port Everglades) to Amsterdam, where it will embark on a series of seven- and 14-night itineraries exploring Norway and the Arctic Circle, as well as Baltic cruises with ports of call including Copenhagen, Warnemunde (Berlin), Tallinn, Helsinki, Stockholm with an overnight in St. Petersburg, Russia. A British Isles itinerary will include Newcastle upon Tyne, South Queensferry (with an opportunity to attend the Edinburgh Military Tattoo) and calls throughout Iceland and Norway.

Come September, Nieuw Statendam will sail from Amsterdam to Civitavecchia (Rome) on a 12-night cruise visiting Ireland, Portugal and four ports in Spain. The ship will then offer two 10-night itineraries from Civitavecchia; one to Croatia, Montenegro, Greece and Italy, and the other to Spain, Gibraltar, France, Monaco and Italy.

"Holland America Line is known for offering incredible itineraries that deeply immerse our guests in the places we visit, and for Nieuw Statendam's inaugural season in Europe we crafted cruises that will deliver an unforgettable experience," said Orlando Ashford, president of Holland America Line, in a news release. "By offering nearly six months of cruising in the region, we're able to take the ship from Iceland to Greece and everywhere in between. We encourage everyone to book early because interest has been remarkably high for our newest ship."

On October 27, Nieuw Statendam will depart on another transatlantic cruise, this time back to Fort Lauderdale on a 14-night voyage with stops in Cartagena, Malaga, Cadiz and the Azores.