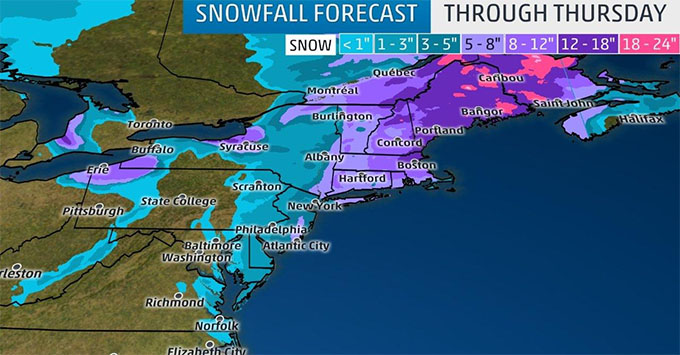 (4:45 p.m. EST) -- Winter Storm Grayson hit the U.S. East Coast during the first week of January, and while no cruise ports are closed at this time, it has affected some cruise ship schedules.

The storm began on Wednesday, January 3 in the southeast U.S., with snow falling in parts of Florida, Georgia and the Carolinas. It moved up the coast overnight, intensifying because of "bombogenesis" -- a meteorological effect that occurs when cold air from land meets warm air over the ocean -- and arrived in the mid-Atlantic and New York on Thursday, January 4.

The biggest issue with cruise ships has been in New York City. Cunard's Queen Mary delayed leaving the Red Hook terminal in Red Hook for a day. Originally scheduled to arrive January 5 in the morning and depart again on its next cruise that day, Norwegian Breakawy will arrive at the Port of Manhattan later than normal and not depart until Saturday, January 6, at 3 p.m. Passengers who do get to New York on Friday will be able to board between 6 p.m. and 10 p.m., however, and the line is giving cruisers a refund for the missed day in the form of onboard credit. A new itinerary will also be released for the adjusted sailing, the line said.

Carnival Elation arrived in port on January 4 as expected, with no changes to its next itinerary, the line said. All operations are normal, according to representatives for the Port of Jacksonville.

Crystal Serenity arrived into Charleston for an overnight port stay on January 2. According to the line's social media ambassador Andy Geller, who is onboard and posting on the Cruise Critic message boards, the vessel left the port at 6 p.m. instead of 10 p.m. on January 3.

Royal Caribbean's Grandeur of the Seas made its scheduled stop in Charleston on January 4, although passengers report that shore excursions have been canceled. Noted Lady Hudson, who is onboard: "Got into Charleston about 2 hours late. The city had five inches of snow and it is 28 degrees. All tours have been cancelled. Capt began his talk this morning with 'It's beginning to look a lot like Christmas!' Cautioned people about slippery conditions if going outside."

Carnival Ecstasy is still on schedule for its turnaround on January 6, the line said.

The Port of Baltimore is open. "Coast Guard restrictions on ship travel will be lifted tomorrow morning so we will be good," a spokesman for the port said. No changes are expected for Carnival Pride, due in port on Sunday, January 7.

On January 4, port officials made the following statement: "Currently, we anticipate that the storm will pass before we have any issue with closures."

Cunard's Queen Mary II was slated to leave Brooklyn on January 3. The line delayed departure until 7 a.m. on January 4, and the ship is still slated to arrive in Southampton as originally scheduled on January 10.

Norwegian Gem departed Manhattan on January 3, as scheduled. Norwegian Breakaway will arrive in port late on January 5, with the first day of the cruise delayed until January 6.

On Cruise Critic message boards, Norwegian Breakaway passenger MM40 gave the following update in the afternoon on January 4: "I walked ship (interior only) and didn’t see any damage. Floors a little wet on deck 6, 7 & 8 where doors open outside to walk around ship but that’s only problem I’ve seen. The usual towels by doors to keep water out (not from flooding but from sea spray). From what I’ve seen last night and today - ship is in great condition for next cruise!"

Added Breakaway passenger Jenlek on a different thread: "It is indeed rocking and rolling and last night (January 3) was a bit harrowing. Some staterooms had balcony doors that would not close or that blew out, including at least one Haven Suite. There is flooding on many floors including in La Cucina. Our balcony divider came off the ship wall and the railing and it banged all night against the window but fortunately did not break the window. We have been kept inside the ship since yesterday and the tenders at Great Stirrup Cay were cancelled so we didn't get that stop."

Cruise Critic will continue to update this story as the storm evolves.