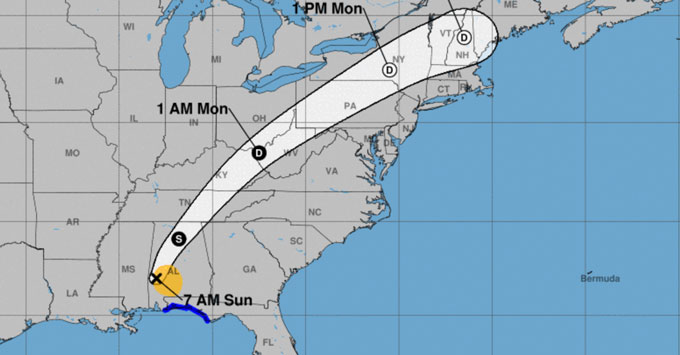 (Updated 2:30 p.m. EDT) -- While Post-Tropical Depression Nate continues to weaken, it has affected at least 11 cruise itineraries in the Western Caribbean -- where a number of ships fled in the wake of Hurricanes Irma and Maria. After the National Hurricane Center updated Nate to a Category 1 hurricane late Friday night, it downgraded it to a tropical storm, then tropical depression, Sunday morning.

Carnival Triumph, Carnival Dream, Carnival Fantasy, Carnival Sensation, Carnival Splendor, Carnival Breeze, Oasis of the Seas, Allure of the Seas and Liberty of the Seas all have been rerouted to avoid the storm. The changes come just weeks after the pair of major hurricanes caused widespread devastation in the Eastern Caribbean and affected a total of more than 100 cruises.

See below for the most up-to-date list of itinerary changes.

Nate made landfall over Mississippi over the weekend and has weakened as it moves north/northeast. The storm prompted a hurricane and storm surge warning from greater New Orleans to the Alabama/Florida border, and the U.S. Coast Guard suspended all port operations in New Orleans and Mobile on Saturday. Ships embarking and disembarking in these ports over the weekend had their schedules altered. Ship traffic in New Orleans resumed late Sunday afternoon. Mobile reopens Monday afternoon with daylight restrictions in place.

Additionally, ships skipped ports such as Cozumel and Costa Maya last Thursday and Friday as the storm moved through the Western Caribbean. The Mexican government discontinued all watches and warnings Saturday, according to the National Hurricane Center.

Cruise Critic is in contact with all the cruise lines and will update this story as more information becomes available.

Carnival Fantasy: The cruise ship did not sail from Mobile on Saturday as scheduled, nor was it able to leave Sunday as hoped because the port remained closed well into the afternoon. Instead, now that Mobile has reopened, Carnival Fantasy is expected to arrive at 4 p.m. today, October 9, and disembark passengers. Passengers embarking today have been advised by Carnival that the check in time is schedule for 7 - 9 p.m. However, in a text alert, the cruise line said: "Due to daylight restrictions, we will remain overnight in Mobile and depart tomorrow morning at the earliest opportunity."

Carnival Fantasy will now sail a modified two-day cruise to nowhere. Passengers who opt to sail the shortened itinerary will receive a pro-rated refund. Those who opt to cancel can do so and receive a future cruise credit equal to their cruise fare.

Carnival Dream: Originally scheduled to leave Sunday from New Orleans, Carnival Dream instead will depart Monday, visiting Grand Cayman and Cozumel. The itinerary has been shortened from seven to six days. Passengers who sail the shortened itinerary will receive a prorated one-day refund. Those who opt to cancel can do so penalty-free and will receive a future cruise credit equal to their cruise fare.

Cruise Critic member IndyDenise posted on the Carnival forums that Carnival Dream skipped Belize City on Thursday and spent the day in Cozumel instead.

Carnival Triumph: Carnival's Brand Ambassador John Heald said in a Facebook post that Triumph's Saturday call at Cozumel was canceled. He added that because no replacement ports were available given the storm's location, the ship would operate a cruise to nowhere.

For passengers who chose to continue on with their sailing, which departed from New Orleans on Thursday night, Carnival offered a 50-perfect refund and 50-percent future cruise credit. Additionally, the line will refund all prepaid shore excursions (including taxes, fees and port expenses).

Those who chose to cancel will receive a future cruise credit in the full amount of the cruise fare paid. Shore excursions, Fun Shop purchases, beverage packages and added fees also will be refunded.

"We know how much you were looking forward to our original itinerary and regret this change of plans," Heald said. "Rest assured, this is not a decision we take lightly since the safety of everyone on board is our number one priority.

"In addition to a full schedule of activities and entertainment, we're adding some extra special events that are not part of our regular programming for your enjoyment."

Carnival Sensation: Carnival confirmed with Cruise Critic the ship's October 5 cruise also has been modified. The new three-night itinerary from Miami will include the original call at Key West but replaces Cozumel and Nassau with two days at sea.

Carnival Splendor: The September 30 cruise spent October 6 at sea instead of visiting Cozumel.

Carnival Breeze: The October 1 cruise spent October 6 at sea instead of visiting Cozumel.

Oasis of the Seas: Instead of calling Friday at Cozumel, the ship replaced its Thursday sea day with a second visit to Labadee (where it spent the day Tuesday); Friday and Saturday will be sea days.

Allure of the Seas: Nassau has replaced Costa Maya as the ship's Friday port of call.

Liberty of the Seas: The ship will skip its Friday call at Cozumel and instead spend the day at sea.

American Duchess: The Mississippi-based river ship, which was scheduled to return to New Orleans early Sunday, will dock in Baton Rouge on Saturday night and will sail into New Orleans late Sunday. A spokesman for the cruise line said Sunday's departure would not be affected, and that alternative shore excursions are being arranged for passengers on the current sailing.