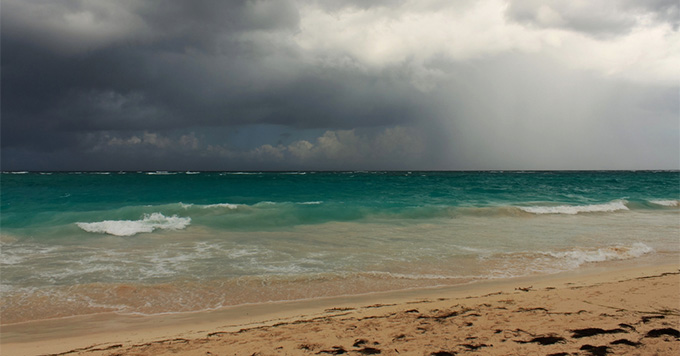 (Updated 2:30 p.m. EDT) -- Several cruise ships have been rerouted to avoid Hurricane Maria, a now-Category 1 storm that has ripped through the same region of Caribbean islands still recovering from damage caused by Hurricane Irma.

The storm, which has already devastated the island of Dominica, hit Puerto Rico as a Category 4 hurricane with winds of 155 miles per hour on the morning of September 20, causing widespread damage and a power outage to the entire island.

Carnival Cruise Line has canceled a handful of Carnival Fascination cruises out of San Juan -- including its September 24 departure -- in addition to modifying other ships' itineraries to avoid the storm and replace affected ports. Celebrity Cruises also has made changes to Celebrity Summit's itinerary, which initially included a stop in San Juan next week. Royal Caribbean also rerouted ships to avoid inclement weather conditions. San Juan's cruise port remains closed and on September 24, Royal Caribbean confirmed it would be forced to cancel a call there by Adventure of the Seas on September 27.

See below for the most up-to-date itinerary changes.

In a statement, Carnival said: "Port officials have informed us that our terminal in San Juan has sustained extensive damage as a result of Hurricane Maria. The assessment is still in progress but it now appears that it will take several weeks to make the necessary repairs."

Carnival Fascination docked at San Juan on September 24 to allow passengers who wished to disembark do so. The ship will then reposition to Florida, standing in for Carnival Elation as its dry dock schedule has been delayed due to Hurricane Irma.

Several cruise line private islands, including Half Moon Cay and Princess Cay, had closed and evacuated in prepration. A number of ships, including MSC Divina and Celebrity Equinox, already had switched to Western Caribbean itineraries this week, in the wake of Hurricane Irma, as had all Norwegian Escape sailings through the end of 2017. Windstar is also preparing to revise its Caribbean itineraries, which start in early November.

Hurricane Maria continues to move northward along the eastern seaboard of the U.S. with sustained wind speeds of 80 mph.

Carnival Fascination: Six Carnival Fascination cruises have been canceled due to the condition of San Juan's cruise port; they include the ship's San Juan departures (September 24, October 1 and October 8) and Barbados departures (September 27, October 4 and October 11). The ship will instead relocate to Florida, where it will stand in for Carnival Elation, whose dry dock has not been completed (see below).

In addition to citing "extensive damage" to its terminal, Carnival said in a statement: "Fascination guests currently on board enjoyed a day in Antigua today and are now on their way to San Juan. Our intention is to be in position to dock this weekend, in the event the port re-opens, in order to give guests an opportunity to debark, if they wish to do so.

"Alternatively, guests may also remain on board as the ship repositions to Miami, where it will arrive on Tuesday afternoon and stay until Wednesday. Our airline partners are committed to working with our guests to waive any change fees associated with rescheduling flights."

Passengers on all canceled cruises automatically will receive a full refund (to the original form of payment) for the cruise fare paid, as well as Fly2Fun reservations, pre-purchased Carnival Adventures, Fun Shop purchases and beverage packages. Carnival also will work with its airline partners to assist passengers with independent air travel regarding the waiver of change fees.

Carnival Elation Carnival Elation's dry dock was interrupted by Hurricane Irma and as a result its refurbishment has not been completed in time for the September 28 cruise out of Jacksonville. Instead, Carnival Fascination, displaced from San Juan, will replace Carnival Elation on all future cruises until the dry dock is completed.

Carnival Magic: The September 16 sailing of Magic (Grand Turk, San Juan,St. Kitts and St. Maarten) went to to Amber Cove, Montego Bay, Grand Cayman and Cozumel. The September 24 sailing will go to Cozumel, Belize and Costa Maya. The October 7 and 21 sailings will depart Port Canaveral on a seven-night cruise to Cozumel, Belize, Roatan and Costa Maya.

Carnival Ecstasy: The September 20 cruise departing Charleston will visit Nassau instead of Princess Cays, as well as Freeport.

Carnival Vista: The September 23 cruise to La Romana in the Dominican Republic and Southern Caribbean will drop Grand Turk as a port. The ship's October 21 voyage will depart Miami on an eight-night cruise to Amber Cove, La Romana, Aruba and Curacao.

Carnival Sensation: The September 30 sailing will substitute Freeport for Grand Turk. For its five-night October 14 and 28 cruises, the ship will depart Miami for calls on Nassau, Half Moon Cay and Freeport.

Carnival has re-added Key West to itineraries that were previously modified due to damage caused by Hurricane Irma, according to a Facebook post by the line's brand ambassador, John Heald. Carnival Victory and Carnival Paradise will resume calls this week.

Adventure of the Seas: The ship's next sailing, originally scheduled to depart September 23 from San Juan, has been canceled. Passengers will be refunded the full fare, and also a 25 percent future cruise credit, based on the cruise fare, if a new cruise is booked in the next 30 days.

"If you do not feel comfortable traveling at this time, and need to cancel your cruise, we will provide you with a 100 percent future cruise credit, for a cruise booked within the next year. Pre-booked shore excursions will be refunded to your original form of payment."

Anthem of the Seas: Citing the hurricane's projected path, Royal Caribbean has changed Anthem of the Seas' itinerary from Bermuda to Canada and New England, with calls at Portland, Maine, and Halifax, Nova Scotia. The line will refund 50-percent of the cruise fare to passengers, in the form of onboard credit, as well as refund pre-booked shore excursions in the original payment form.

In addition, the following Royal Caribbean ships have made changes to their itineraries because various ports are closed from Hurricane Irma:

Allure of the Seas: Labadee will sub for St. Thomas and St. Maarten on the October 1 and October 15 cruises, respectively.

Harmony of the Seas: Instead of St. Kitts, San Juan and Labadee, the ship's September 23 cruise will include visits to Cozumel, Costa Maya and Nassau. Its October 7 cruise will replace St. Maarten with St. Kitts.

Oasis of the Seas: The ship's September 24 cruise will call at Cozumel, Costa Maya and Nassau in lieu of St. Kitts, San Juan and Labadee. Its October 8 cruise will replace St. Maarten with Nassau.

Freeport no longer will replace Key West on Enchantment of the Seas' September 18, September 25, October 1 and October 9 cruises. Empress had resumed calling at Key West September 24.

Celebrity Equinox: Celebrity has made adjustments to the first few days of Celebrity Equinox's 11-night Southern Caribbean itinerary, departing September 25. The ship will now visit Nassau September 26 (formerly a sea day), spend a day at sea September 28 (instead of calling at San Juan) and call at St. Kitts in lieu of St. Croix September 29. The rest of the itinerary remains as originally scheduled.

In addition, the following itinerary changes have been made due to a combination of Hurricane Maria's and Hurricane Irma's impacts on several ports:

Follow our Hurricane Zone for more information on ways to prepare for hurricane season cruising, an inside look at the 2017 Atlantic season outlook and more.