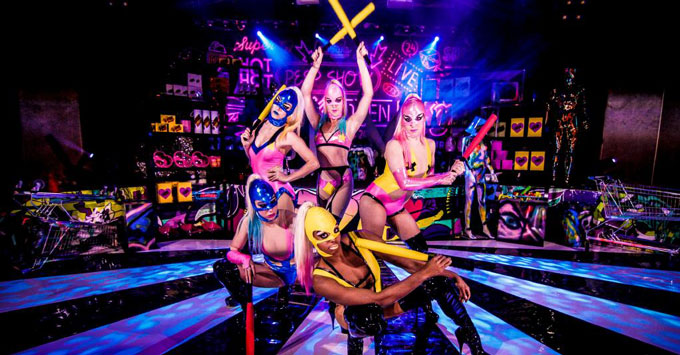 (10:33 p.m. AEST) -- We had heard the rumours. How do we put this delicately? Bedroom utensils may be used on stage. But it still comes as a shock to see a sex toy pop up in front of us. What is this thing doing in the theatre of a P&O cruise? Then again, this is the company boasting Australia’s longest history of nightlife at sea. It was probably time to crank it up a notch.

A few minutes ago, we had been happily dining in the Waterfront, hidden away in a curtained-off section for people with tickets to Love Riot. The new, adults-only, burlesque show launched this year on Pacific Explorer, with warnings about adult content. They weren't kidding. Expect to see latex, elastic and pink bits (of plastic). Get ready for multiple acts performed by two men, five women, three blow-up dolls and a goat.

Led astray and through the atrium, the audience is escorted to the Black Circus lounge by the cast, who show up at the end of a five-course meal. Sirens wail, loudspeakers squawk, and other passengers gawk.

A blonde woman wearing a mask, rubber corset, hot-pink cape and thigh-high boots guides us inside. The stage is lit up with neon 'Peep Show' and 'Hot Hot Hot' signs reflecting off gold mannequins and shopping trolleys. We're not sure what it all means. 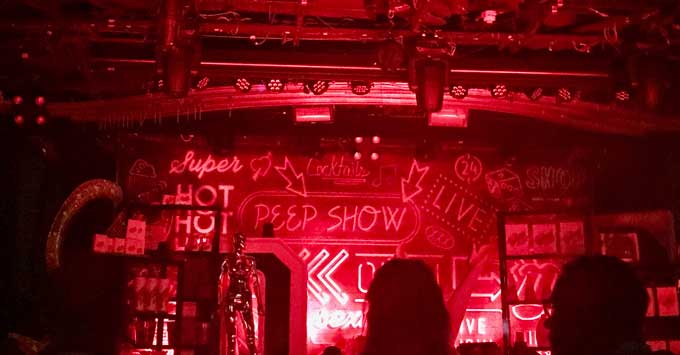 Out come the dancers wrapped in fluoro leotards and fishnet stockings. Somehow balancing on a moving ship in dangerously high heels, they show off acrobatic tricks, while others dangle and untangle from silk sheets hanging from the ceiling. A face-pulling unicyclist impresses with his nimble skills, while a contortionist bends and blows our minds. Another woman suggestively swallows a metre-long, sausage-shaped balloon deep into her throat to who-knows-where.

But mostly it is hilarious; the best comedy on the ship. We laugh non-stop for 90 minutes. A virgin juggler ("also known as a juggler") juggles three life-size blow-up dolls; a medley of love songs ends with the singers in compromising positions; a near-naked man does cartwheels with an inflatable appendage flapping between his legs. We're still worried about the girl with the vanishing balloon.

While it's not for the easily offended, the show is wild and quirky rather than sleazy; raunchy rather than vulgar. Be warned, or reassured: there is full-frontal nudity, however, crucial body parts are strategically covered (in most cases). 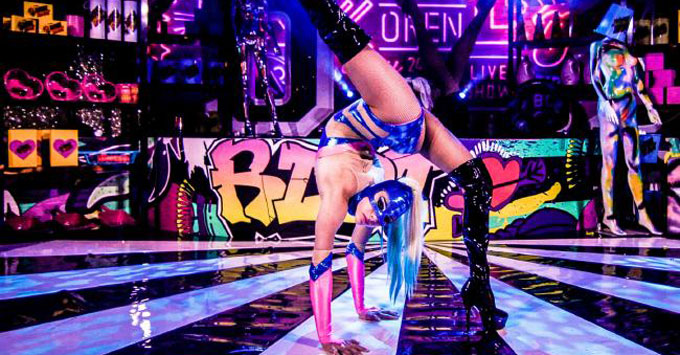 Love Riot is like no other entertainment at sea; for many cruisers, it's unlike anything seen on land either, unless you caught the highly acclaimed romps Blanc de Blanc at Sydney Opera House or Limbo at Sydney Festival (and other festivals around the world) by the same director, Scott Maidment, who also worked on Madonna’s Rebel Heart tour. P&O Cruises passengers are privileged to see a production of this calibre -- starring professional circus performers from the US, Canada, Sweden, Austria and Australia -- for a fraction of the price.

The romping continues that evening at The Bonded Store, which we nickname The Bondage Store after that sexy spectacle. Our giddy group fills a green velvet booth and orders Archie Rose gin and whisky cocktails. One of the concoctions is revealed in a smouldering, glass skull, while my negroni appears beneath a smoky mist. The vibe is cool with a dash of hipster, but the bloke sitting up at the bar with a beer is just as happy.

A tribute to the underground speakeasies found in Sydney, Melbourne or New York, the venue is concealed behind a door disguised as an artwork. It's exquisitely, eccentrically designed with a remarkable attention to detail. Bookcases hold leather-bound encyclopaedia and shelves are lined with antique clocks and typewriters, old pharmacy bottles, a jar of snakeskin and an insect collection. 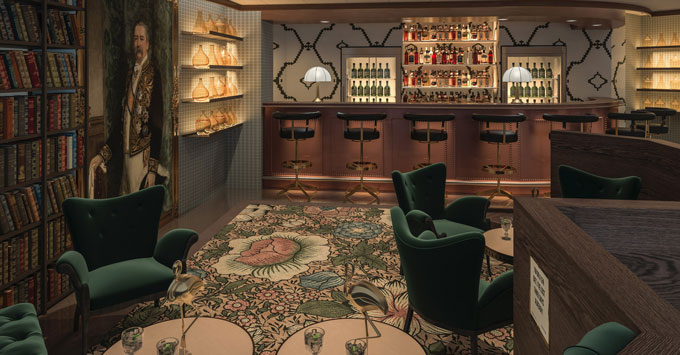 Three other nights on our South Pacific cruise have dedicated themes: Back to School, Gatsby glamour, and Bianco, where everyone wears white. These costume parties take over the whole ship, creating an almost surreal, exciting atmosphere that can only be achieved when 1,000 people get into the spirit.

Live music is presented several times a night, including an exceptional blues jam involving a dozen talented musicians and singers in the Blue Room. Literally jazzed up with jazz instruments as decorations, this dark den makes us forget where we are. Sinking into white leather lounges, we settle in for the gig before a DJ arrives at 11pm to transform it into a dance club. Next minute, we're up dancing with the twenty-somethings.

Pacific Explorer is proof that the nightlife on cruise ships involves more than getting drunk. Beyond the bars are sophisticated shows and events, worthy of booking a cruise to experience them. The booze cruise stereotype is sunk.

Cheesy entertainment is one of the last cliches for the Australian cruise industry to overturn. After a decade of revolutionising dining, decor and onboard activities, local cruise lines are now devoted to better shows, better sets and, in the case of Love Riot, pushing the boundaries. World-class directors, producers and performers have been lured to tailor productions at sea; stage design has improved significantly; and theme parties shift the focus from drinking to the family-friendly fun of dressing up.

Exclusive to Pacific Explorer, Love Riot costs $10 for general entry including a welcome cocktail and souvenir glass, or $29 for a VIP ticket, which adds the five-course dinner in Waterfront and priority seating in the front rows of the Black Circus cabaret lounge. Dinner consists of scallop tataki, a heart-shaped veal pate, crab bisque, beef short rib and a chocolate sphere smothered in hot caramel -- and yes, they do wait for everyone to finish eating before turning up to abduct you.

Other entertainment is free, excluding alcohol -- not that you’ll need it.