You may also like
Dismiss
Coronavirus: Updated Cruise Ship Policies and Cancellations Because of COVID-19 (2021)
Did Ed Sheeran Name His Baby After Antarctica Cruise?
Live From MSC Cruises' MSC Grandiosa: What's it Like Sailing on a Big Ship in the COVID Era?
Australia Extends Ban on Cruises to March 17, 2021
Adventures by Disney to Offer First Expedition Cruises Geared Toward Families
Disney Wish To Feature New Onboard Entertainment Firsts from Disney Cruise Line
These Ships Are Coming Back To The U.S. in 2022: Here’s Why You Should Care
Are Cruise Lines Increasing Gratuities in 2023?
Just Back From Allure of The Seas' Maiden Galveston Sailing: Hits and Misses 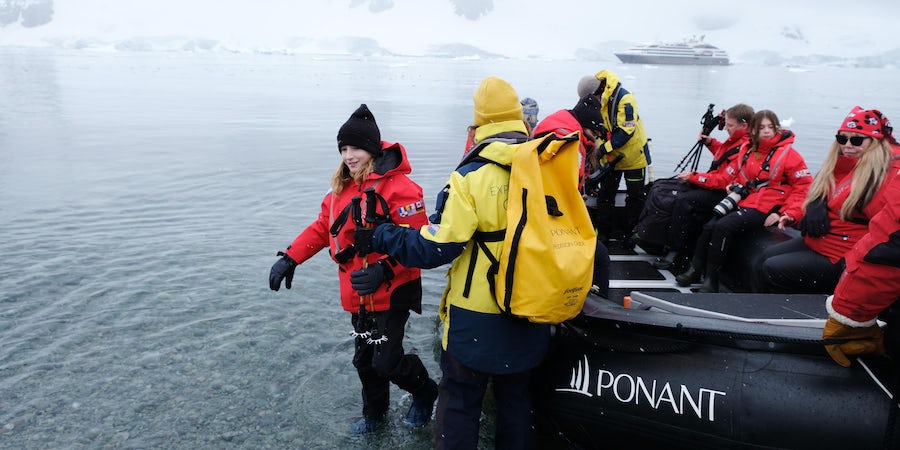 August exiting the Zodiac during a wet landing in Antarctica (Photo: Cynthia Drake)

Just Back From Adventures by Disney in Antarctica: What Makes it Different?

August exiting the Zodiac during a wet landing in Antarctica (Photo: Cynthia Drake)

(4 p.m. EDT) -- On pajama day in Antarctica as we were waiting on an outside deck, I looked over and saw Capt. Fabian Roche (a.k.a. Captain Fab) wearing a bathrobe (epaulets sewn onto the shoulder seams) paired with Christmas socks. Later in the cruise, he’d dive into the ship’s pool mostly clothed during the AntarcTiki pool party, eliciting loud cheers and laughter from families assembled together on the chilly afternoon.

The Adventures by Disney Difference in Antarctica

If you’re thinking about Mickey Mouse and his friends cruising with penguins on an iceberg, this isn’t that kind of voyage. You’ll find all the characters and cinematic-style entertainment on a Disney Cruise Line cruise, but Adventures by Disney (a completely separate company that charters various expedition and river cruise ships) is different. An ABD trip to Antarctica isn’t a character-based vacation, but instead builds upon the familiar Disney brand and its emphasis on providing "magic-filled" family-friendly experiences plus excellent customer service.

Additionally, all gratuities and alcoholic beverages (except for certain premium drinks) are included in the cost of this Adventures by Disney voyage.

That said, there are occasional subtle nods to "the mouse" throughout an ABD Antarctica trip: Mickey-shaped bread and dessert designs thanks to the French pastry chefs aboard Ponant's L'Austral; a scent-based Disney scavenger hunt through the ship; and a special Disney category during trivia. One day on our sailing, Captain Fab surprised us by revealing a map of our voyage throughout the night, showing he had steered our vessel into the shape of a Mickey Mouse head.

Though there were about one dozen tweens and teens on our January 2023 voyage of 161 passengers, most passengers were singles or couples traveling to the continent with a company they simply trusted and loved. We met several couples who’d been on multiple Adventures by Disney trips, from Vietnam, Laos and Cambodia, to Australia.

As with other ABD experiences, our Antarctica sailing included dedicated Adventure Guides (our cruise had five) in addition to Ponant’s team of naturalists. The Adventure Guides worked in partnership with the ship staff to provide programming and served as a front line team for ABD guests throughout the trip, joining us on our expeditions to the continent, hosting games and onboard activities and special events for kids (known onboard as “Junior Adventurers.”)

No Lack of Activities in Antarctica with Adventures by Disney

Adventures by Disney programming provides a layer of fun on top of multiple daily excursions you can expect while you're on board an Antarctica trip. Some days that might mean crafting yarn penguins or playing Minute to Win It; other days, it's family trivia, Bingo, or movie marathons in pajamas. There are a few nights with dedicated dinners and activities just for Junior Adventurers (and a couple adults-only activities like cabaret performances or the Match Your Mate game show), but most activities are geared toward getting the family together as a whole.

If you’ve been on a river cruise such as the Danube or Rhine with Adventures by Disney, an Antarctica expedition cruise is a completely different experience. For safety reasons, and because they are experts on Antarctica, the expedition leader and team of naturalists plays the most critical role in working with guests and getting them to and from each landing, while the team of Adventure Guides plays more of a supporting role.

Guests must pack layered clothing for the Antarctic summer weather (which ranged from 30 degrees to 50 degrees Fahrenheit during our voyage -- with winds, rain and snow at intervals). Ponant provides a thick parka to each cruiser, which you can take home, and loans out rubber boots in your size. The whole experience feels much more like an adventurous expedition, but what Disney adds little touches throughout the voyage: Chapstick to tuck into your parka pocket; sunscreen available at the door; pre-stamped postcards to mail from the southernmost post office; and handwritten notes tailored to each guest written by the Adventure Guides.

Our guides each donned orange knit hats with two pom-poms representing Mickey ears, and they marveled at the animals we encountered along with us -- for a few of them, it was their first time experiencing Antarctica along with the guests.

Unlike a river cruise, where you are given a menu of excursion options from which to select, on an Antarctica expedition the plan remains fairly flexible, and completely depends on weather. The expedition team leader will brief all passengers each day on where the captain hopes to anchor the following day. If the wind and waves are calm, you might have the option to take a Zodiac motorized inflatable boat to a landing site and spend an hour or so hiking or taking photos. Other days when landings are more difficult, a Zodiac cruise may be offered. Still other days might mean remaining on the ship and waiting out the weather.

This is one of the advantages of having Adventure Guides along for the ride, as they can swiftly create backup plans for on-board fun on the days where weather prevents you from exploring on shore.

Adventures by Disney's Adventure Guides are Key to Fun

Another major benefit of having Adventure Guides along on any ABD trip is that they are constantly snapping photos of you and your family throughout the trip, and they deliver all the photos (more than 2,000 for our cruise) free of charge following the voyage.

The guides also tend to be extremely personable. They get to know each guest by name, making an effort to have conversations with each person, playing board games, or having meals together. Many guests tearfully bade goodbye to our five guides at the Buenos Aires airport before all going our separate directions following a group charter flight from Ushuaia, Argentina. We had all gotten to know our team so well over the course of 12 days -- perhaps even better than on a river cruise, where the group is more divided throughout each day, and it was truly sad to leave.

"These ABD cruises have been an eye-opener for us," Captain Fab told our group during the cruise’s closing night festivities. Ponant typically hosts a 68- to 75-year-old (and perhaps more serious) cruise client. Pajama day isn’t usually a thing among that crowd, nor is an Adventure Guide hopping on the morning announcements making whale sounds; or a captain wearing Mickey ears in the pool. "The atmosphere is incredible," said Roche. "There’s a cohesion to the group that’s very special. It’s been great fun."