You may also like
Dismiss
Rolling Out the Deals: Why Now Might Be a Great Time to Book a Cruise
Live From MSC Cruises' MSC Grandiosa: What's it Like Sailing on a Big Ship in the COVID Era?
Photos From Paul Gauguin: Cruising Has Resumed In Tahiti
Adventures by Disney to Offer First Expedition Cruises Geared Toward Families
Ships Ahoy! A Weekly Round-Up Of Worldwide Cruise Ship News
Live From Celebrity Edge: A Cruise That Seems Normal Again; "I'm So Hopeful"
Live From Royal Caribbean's Odyssey of the Seas: Why You'll Never Be Bored on This Cruise Ship
Additional Cruise Lines Opt To Require COVID-19 Boosters
Cruise Bookings Remain Strong Despite Omicron, New Royal Caribbean Boss Says 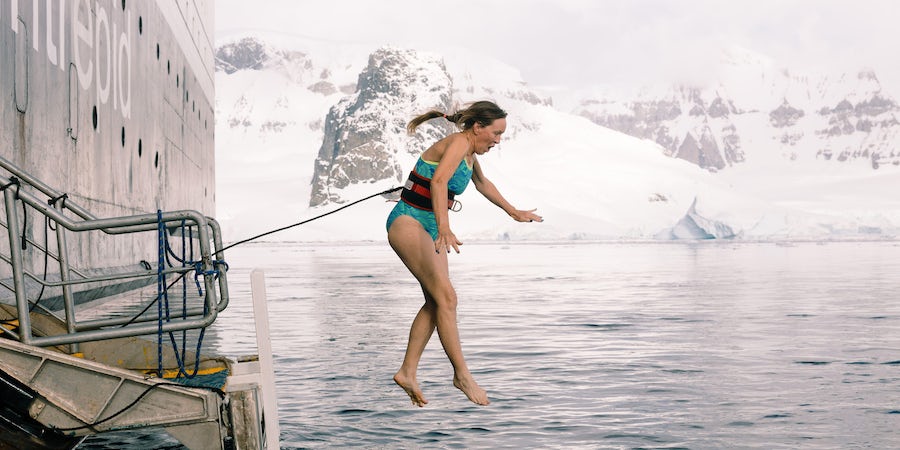 (4:05 a.m. EDT) -- Having crossed the Drake Passage onboard Chimu Adventures' Ocean Endeavour cruise ship after leaving Ushuaia, Argentina, three days earlier, I was geared up for a bucket-list Antarctica voyage. Along with 135 fellow passengers, we're on 14-day Complete Antarctica adventure to the Antarctic Peninsula that will take us to the South Shetland Islands and the little-visited Weddell Sea.

Just 24 hours here and I've already been seduced by Antarctica. During summertime, between December and March, the sun rarely sets on the White Continent, and endless daylight drapes craggy, snow-covered peaks.

Despite the constant stream of daylight, the ice-flanked waters of Errera Channel are experiencing one of the coolest seasons on the Antarctic Peninsula for eons. A fresh dusting of snow coats the mountains and icebergs freshly calved off a glacier drift by -- a serene seascape that reflects on the ocean.

I'm not just here to soak up the landscape however, as jaw-dropping as it is. I'm also here to take on the Polar Plunge. Read on to find out how I got on.

The Polar Bear Plunge Originated in the Arctic

The Polar Plunge is a much-anticipated rite of passage for visitors to Antarctica, whether arriving by cruise ship or taking up a posting at one of the many Antarctic Research Stations. The custom purportedly began in the Arctic, where it's known as the Polar Bear Plunge and traditionally takes part on New Year's Day, with brave participants literally plunging into the icy water from land, ship or a Zodiac.

For my fellow expeditioners onboard Chimu Adventures' Ocean Endeavour voyage to the Antarctic Peninsula, a Polar Plunge is a bucket-list experience that many of us joyfully sign up for.

At 64 degrees South and dressed in nothing more than a swimsuit, I'm preparing to launch myself into the crisp water, which hovers somewhere around 0°C/32°F.

Harnessed via a rope strapped around my waist attached to a lifeguard (who is dressed in a penguin suit onesie, I'm poised to plunge into the (literal) breathtaking Antarctic Sea. Health and safety is paramount with all off-ship expeditions and the Polar Plunge is no exception. As well as the lifeguards stationed at the gangway, crew are on standby in zodiacs nearby (also kitted out in penguin onesies), plus there's a doctor and medical clinic onboard. While it's true that you don't need to be an Olympic standard swimmer to Polar Plunge as most of us need just a few strokes to return to the safety of the ladder, anyone with underlying health conditions should consider whether cold water immersion is appropriate.

The Cold Water Literally Takes My Breath Away

The anticipation and excitement is palpable when Expedition Leader Alex Cowan announces that the Polar Plunge will take place in 30 minutes' time.

The previous evening we'd crossed latitude 60 degrees South, with Cowen announcing at the time that "we're now politically, geographically and biologically in Antarctica". Resident Ornithologist Dr Martin Cohen had compared sailing south of 60 degrees to going from "being in a fridge to a freezer". The benefits of cold therapy have long been embraced by the likes of self-professed Dutch Iceman Wim Hof, who has developed a science-backed program around ice bathing.

With a queue of fellow expeditioners enthusiastically lining up behind me, I step down the gangway, laugh nervously, take a deep breath and launch myself into the ocean. The shock is instant. And it's brutal. Then, as the icy water envelopes me I notice the lack of saltiness. Bizarrely, it feels like fresh water. It's a momentary thought before my survival instincts kick in. I'd like to say I swam gracefully back towards the ladder, but in reality, it was more of a desperate swim to safety.

I felt exhilarated. Alive. Invigorated. Deliriously energized and foolishly happy. My body tingled. Though some might attribute my post-plunge euphoria to the generous shot of vodka downed upon exiting the water, I'm not buying it. Wim Hof is clearly onto something. Incredulously, some euphoric plungers said they wanted to do it again. But there is only one opportunity each cruise to Polar Plunge. I recommend you embrace it.