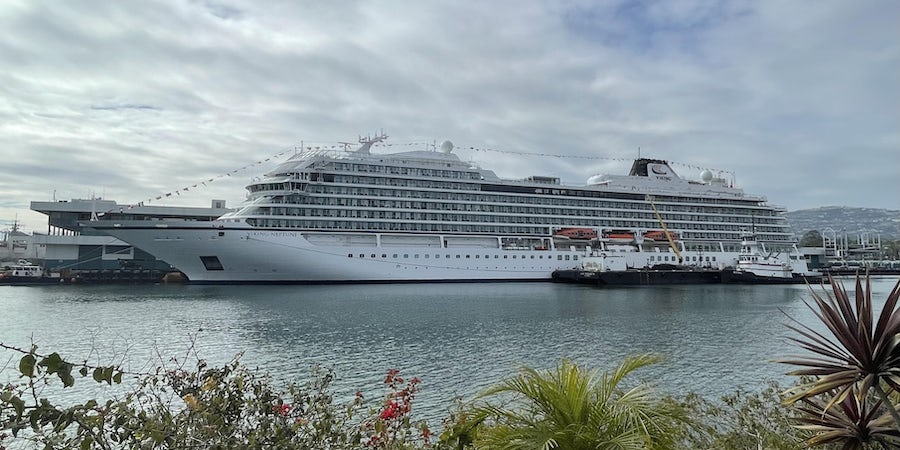 The weather was on Viking’s side as godmother Nicole Stott christened the cruise line’s newest ship, the 930-passenger Viking Neptune, at the Los Angeles cruise terminal on January 8.

With a canopy of dramatic clouds and the tranquil harbor waters providing a mirrorlike backdrop for the brilliantly lit Viking Neptune, the setting couldn’t have been more ideal. As throngs of guests and onlookers lined the rails of the cruise terminal and the observation deck overlooking the ship's bow, Viking chairman Torstein Hagen made an introductory speech, which was followed by performances from Norwegian soprano Sissel Kyrkjebø, godmother of Viking Jupiter (launched in 2020) and Norwegian violinist Tor Jaran Apold.

Dressed in a traditional Norwegian bunad, Sissel presented the former NASA astronaut, author, artist and aquanaut with a historic Viking broad axe, which she used to sever a ribbon that sent a bottle of Norwegian aquavit crashing into the ship’s hull.

With a long blast of Viking Neptune’s horn and a round of applause that echoed throughout the harbor channel, Viking had officially welcomed its eighth Viking Star Class ship. Several hours later, at midnight, Viking Neptune quietly sailed off to Honolulu, continuing a sold out 138-night world cruise that began in Fort Lauderdale on December 22 and will conclude in London on May 9.

Viking Neptune is Almost Identical to Other Viking Ocean Ships

In almost every guest experience aspect, save for a slightly larger gym and a unique art collection mostly featuring works by noted Norwegian artists, Viking Neptune is identical to its seven sister ships. As Viking founder Hagen stated, “We spend a lot of time getting it right the first time and then, like a cookie cutter, we repeat, repeat, repeat.”

“Our goal is to make our guests feel at home, wherever they are," Hagen said. "And whether they go from one Longship to another or to one of our ocean or expedition ships, it should be exactly the same experience.”

Helping adhere to that consistency, Viking employs Los Angeles-based Rottet Studios, headed by Richard Riviere, who works in tandem with Hagen and the Viking team to infuse the ships with a sophisticated, elegant setting for guests to return to after long days in port.

During the post-christening dinner on board, Riviere shared that he comes from a background of land-based hospitality design but unlike many with similar credentials, he clearly understands the dynamics of a sea going vessel.  On all of the Viking ships, there is a fluent and easy-to-navigate guest flow, an infusion of natural light through an abundance of floor-to-ceiling windows and comfortable, well-designed furnishings and fixtures that are free of sharp edges that can become a nuisance in rough seas.  The overall look manages to be inviting and full of rich details that tend to reveal themselves with each passing day.

Even externally, this class of ocean ships is a treat for the eyes.  Like its siblings, Viking Neptune has a sleek and balanced profile with an elegantly long clipper bow topped with a curvaceous superstructure and Viking’s streamlined funnel.

Viking Neptune hsd nine passenger decks with two pools (one midships that can be covered with a retractable dome, as well as an open-air infinity pool that overlooks the stern); a poolside Wintergarden courtyard that can be opened up to the elements; a spectacular two-story observation lounge; a fitness center and a Nordic Spa with a hydrotherapy pool, a sauna and snow grotto; a theater with wings that can be partitioned for lectures and movie screenings; a cabaret lounge and a three deck atrium space for live music performances in the heart of the ship.

Dining venues, all of which are included in the fare, range from the open kitchen World Cafe and the Norwegian-themed Mamsen’s at the top of the ship to the main Restaurant, the Italian-themed Manfredi’s, the Chef’s Table and the galley-adjacent Kitchen Table.

And, unlike many new ships, Viking Neptune features a full wraparound promenade and an  open forward observation deck that provided such a nice view of the christening ceremony.

Viking Neptune has six categories of all outside cabins and suites, ranging from 270-square-foot balcony cabins to a 1,448-square-foot Owner’s Suite with a 12-seat boardroom with video conferencing, a dining room, a living room, a private ocean-view dry sauna and a separate bedroom.  All staterooms feature thoughtful pluses like heated bathroom floors, anti-fog mirrors, safes, 42 inch flatscreen televisions with an easy-to-use remote, upscale Freyja brand toiletries, 110 and 220 volt outlets, USB ports and square wastebaskets.  The latter, according to Hagen, is “so you don’t miss (when you toss things at it).”

Behind the scenes, Neptune has slightly revised crew areas with a more open plan and is the first cruise ship to employ a small hydrogen fuel cell “demonstrator” with a nominal power of 100 kW that will help position the line for its next generation of hydrogen powered ships.

In the meantime, the next ocean ship, Viking Saturn, will debut in April 2023 and will be identical to Viking Neptune.

Following Viking Saturn, the eleventh in the Viking Star series and its successors will be 11 meters longer and slightly wider to accommodate their new hydrogen fuel cell technology.  These newer ship designs will also utilize pods, versus traditional propellers, and the increase in size will include 25 more cabins but the overall guest count will remain under 1,000.  Currently, there are two hydrogen powered ocean ships under construction, with another four planned through 2028.

During a press conference held prior to the christening, Hagen extolled the virtues of hydrogen powered ships, versus the current trend to go LNG.  “Our approach to this is that we have two choices.  We can be scientifically correct or we can be politically correct.  We have chosen to be scientifically correct and not cave in to the whims of the politicians.  There is a lot of talk about CO2, but that is only part of the problem with greenhouse gases that contribute to climate change"

"Until we can implement hydrogen, we use fuel oil, put on scrubbers and use shore power whenever we can to make us as environmentally friendly as possible," he said. "From ship eleven onwards, we will have 20 to 30 percent of our operation based on hydrogen fuel cells and we will go from there.”

With a total of 5.4 million guests in 2022, Viking has seen a growth of 400,000 guests since the COVID-19 pandemic, which Hagen proclaimed is now hopefully “in the rear view mirror”.  The projected occupancy for 2023, which is mostly sold out, is for 6.4 million guests.

If the success of Viking Neptune and its ocean, expedition and river fleetmates is any indication, Viking should be well on track to exceed Hagen’s near future goal of 20 ocean ships and 100 river vessels.